I wrote a couple of posts about Pau after our visit in October 2016.  Click here for a walk around Pau and here for some tips for families.  The link for the tourist office is here.  Now I’ve found more experiences to add, based on our visit a year later.  Walking around the town brings back the excitement I felt when first exploring it as a student years ago.  For a four-month stay it was big enough to have plenty to discover without it being impersonal.

Even if you’ve visited a place several times before, there are always new experiences waiting there.  “Sometimes, in a town you know quite well, you can end up walking round the same places all the time and missing some things completely,” said our friend (and host, and guide) Jacqueline.

Things I saw in a different light

When we arrived in Pau it was already getting dark.  On the Boulevard des Pyrénées we couldn’t see the mountains but we got this amazing view instead 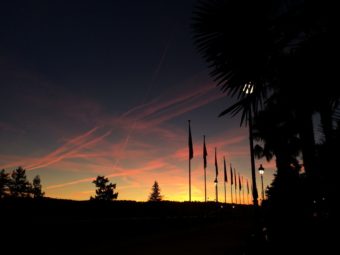 It had taken us all day to get here, so after dinner we stretched our legs with a walk around the town centre.

Along the rue du Château people were eating at tables outside the restaurants in the mild October air. 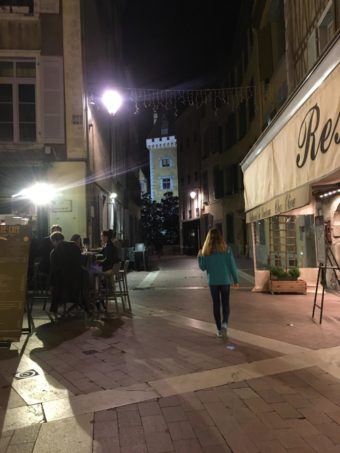 We headed for the Château, illuminated and looking resplendent. 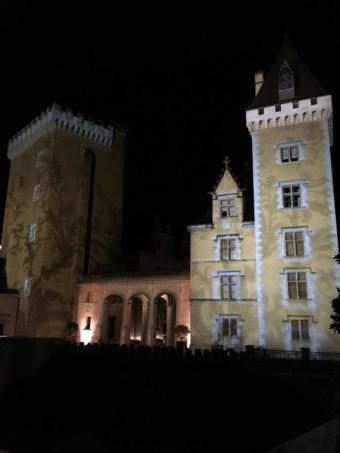 On Place Clémenceau it was raining pink umbrellas again, as it was last year, in a spectacular display in aid of breast cancer charities.  This time my first view of it was in the dark, and it looked like this 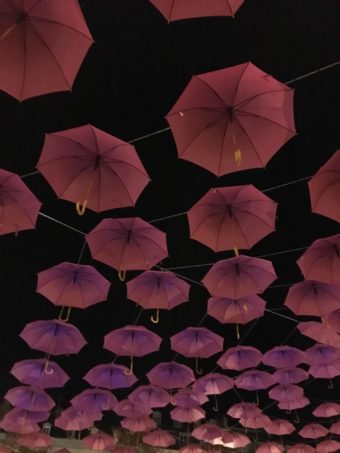 whereas next morning in the sunshine it looked like this 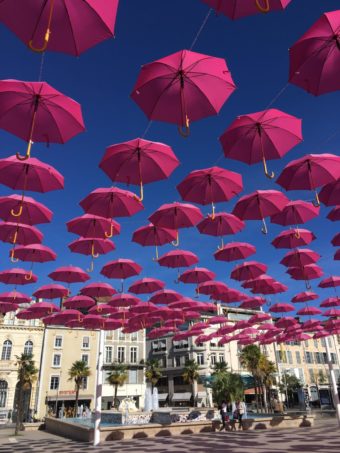 There are 100s of umbrellas in the display, which is known as “Octobre Rose”, pink October. 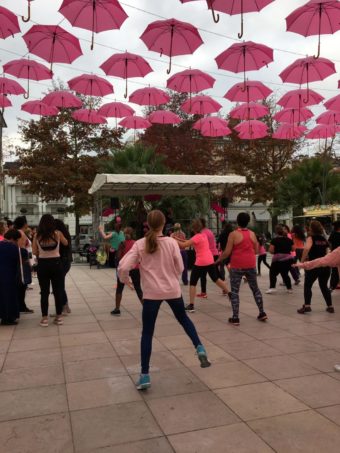 and activities to try out, such as handball and mini-tennis, and a lovely old-fashioned carousel.  There was a feeling of community, so anyone could just go there and get involved in something.

Things I hadn’t noticed before

I’d never noticed the “portes cochères” or carriage gates, originally designed to allow horse-drawn vehicles to pass from the road into an interior courtyard.  You see them in the older parts of town and I spotted several on rue du Maréchal-Joffre, which links Place Clémenceau to the Château.  I used to walked straight past these, assuming they were simply large front doors. They’re always set into the front of a building, not into a free-standing wall.  Then I caught sight of one with the doors open, revealing a courtyard and some little houses.  They looked like houses within a house.

I started imagining what was behind every “porte cochère” I saw.  They look so mysterious.  Once one of them comes to your notice, suddenly they’re everywhere you look.  My daughter rolled her eyes every time I stopped at yet another carriage gate.

What’s lurking behind this one?  We came upon this when it was dark, so it looked extra mysterious. 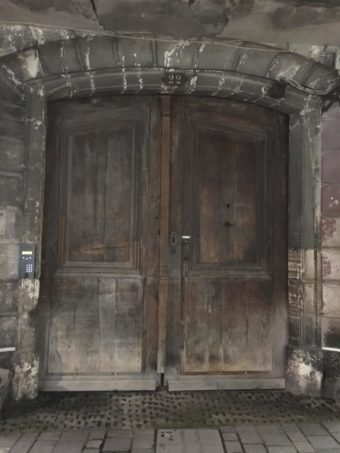 This one’s solid and bold.  What’s it hiding?  I like the original door-knocker (heurtoir), a hand 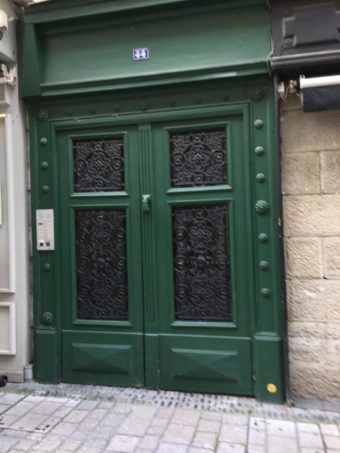 …and this one’s quite gracious – it allows you a glimpse of what’s inside.  It’s more delicate – I like the lacework patterns 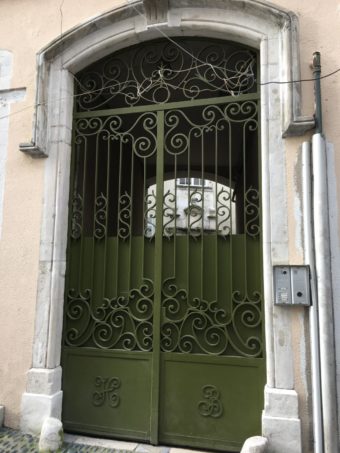 As we walked along the rue Joffre, we passed the Place Reine Marguerite, the oldest square in Pau.  Its oblong archways are a remnant of the 16th century Vieille Halle, the old market. 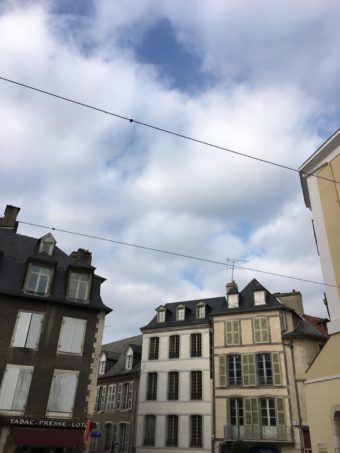 All the streets in this Quartier du Château date from the 16th century onwards.

Just as we passed that square, we looked to the left down the rue Jeanne d’Albret and caught a surprise view of the 19th century gothic church of Saint Martin.  I’ve never been inside but apparently its interior is quite flamboyant and worth a visit. 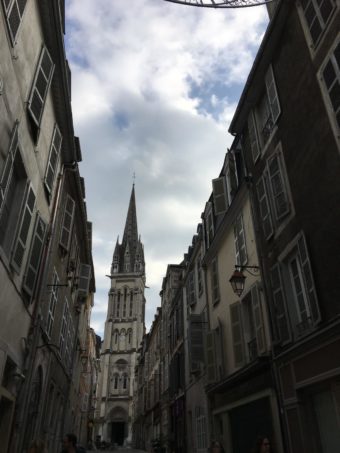 She led us down the next turn to the right, along rue Bordenave d’Abère towards Place Gramont.  From this bridge you can look down into Quartier Hédas, the oldest residential quarter in Pau.  The Château de Pau, thought to originate in the 11th century, was built on a rocky outcrop overlooking the river Gave de Pau and its tributary, the river Hédas.  The Quartier Hédas is built on the site of this old river, below the castle and below the town. 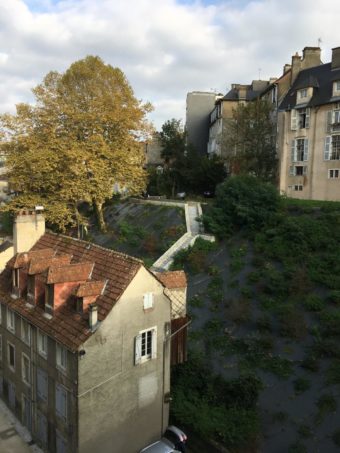 Here we’re walking down into the Hédas quarter 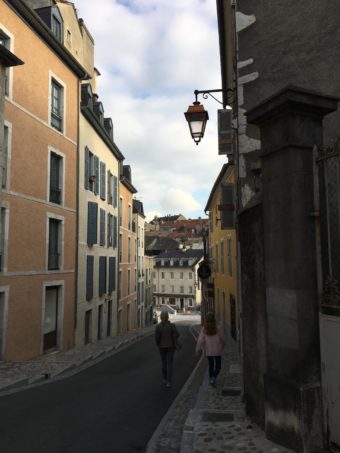 For a long time the river Hédas had served as a sewer for the town.  To add to its indignities, the locals used pebbles and sand from it to build houses and pave streets in the wealthier upper town.  According to legend there were sword duels on the banks of the Hédas in the 16th century.  The streets were narrow, the houses were small, and the area had a bad reputation.

In the mid-19th century people started filling in the stream to finally put an end to all the pollution.  Even today the sewer is still there, thankfully buried more than 3 metres underground.  The quarter’s reputation didn’t improve after the stream was filled in, because Pau’s last executioner had his home there.  He died in 1895.  I read on Wikipedia that his house is still standing, and its façade is decorated with a lion carving.  Then I realized that I had taken a photo of it, not knowing who used to live there (shudder). 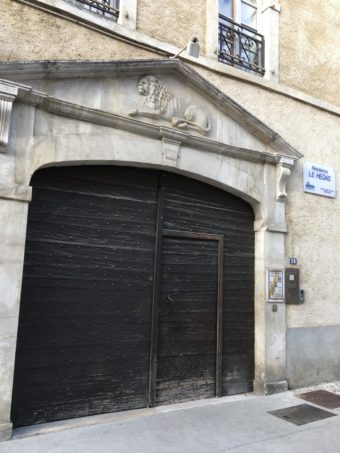 Originally the Hédas fountain, taking water from the river, was the only source of water in Pau.  It was built in the 18th century, modified in the 19th century and even 60 years ago elderly ladies could be seen doing their washing there.  Now a sign above the fountain prohibits people from doing their washing in that enclosure.  We didn’t see anyone trying to do that. 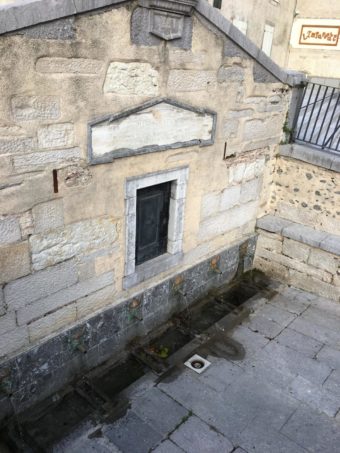 Between the 18th and 19th centuries, a total of seven bridges were built over the Hédas quarter, enabling traffic to move easily across the town.  This bridge carries traffic on the rue des Cordeliers over the rue Hédas. 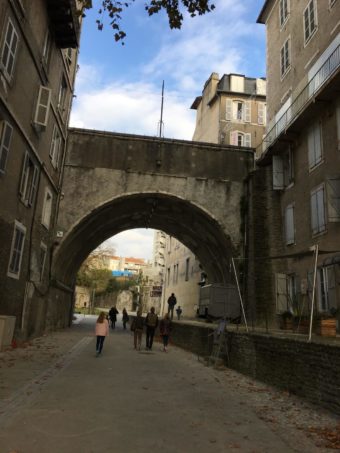 A restoration project in summer 2017 has smartened the Hédas quarter without taking away its character, and now it’s an area where people can go for a walk or have a meal in one of the restaurants tucked away there.

Talking of traffic, in Pau they seem to have it sorted.  Large areas are pedestrianized and I hardly noticed any traffic in the centre.  You can park your car inéé one of the car parks outside the centre and use the Gravettes Gratuites, or Coxitis, to get around the town centre.  These are small, fully electric shuttle buses, running every 10 minutes….and free of charge!

In contrast, this is the amazing new library on Place Marguerite Laborde near the Halles (market).  A smart building on four stories, it’s huge, with exhibition rooms and meeting rooms as well as the large areas housing books and audiovisual materials.  We went there so my daughter could browse the teen magazines and choose one (Okapi) to subscribe to.  Of course if you want to borrow anything, you have to be a local resident. 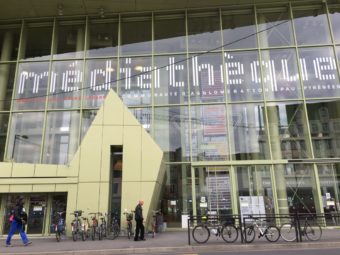 Have you found any surprising things as you re-explore a familiar place?  Maybe like me, you’ve stopped to investigate something you’ve previously ignored.  Or it could be a whole area like the Hédas quarter, which has always been there but you just weren’t aware of it.  It could even be something on your own doorstep!

« Biarritz: another day of autumn sun
The Toddler in the Kitchen »