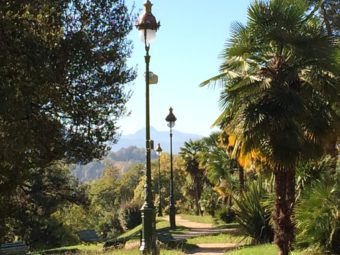 The French town of Pau has a prime position just to the north of the Pyrenees, 50 km from Spain and 100 km from the Atlantic coast (Biarritz and St Jean de Luz).  The Catholic pilgrimage town of Lourdes is only 30 km away.  Pau is the capital of the Pyrenees-Atlantiques department and has been capital of the ancient sovereign state of Bearn since the 15th century.

I spent a few months in Pau, years ago as a student at the university.  My first impression was a sea of white houses, red roofs and lots of lush green.  The mild, wet climate explains the abundance of exotic plants.

You can get there in about 6 hours by train from Paris (Gare d’Austerlitz) or by flying to Biarritz or Pau.  I went there last October half-term with my 12 year-old daughter, to visit a friend.  At the moment there are no direct flights from London to Pau, so we flew with Ryanair, Stansted to Biarritz.

There are about 80,000 people living in Pau.  They are referred to as “Palois” and the adjective to describe Pau is “palois”.  I suppose it has an “l” instead of a “u” because you can’t say “pauois”.

The town has a view directly south, over the valley of the river Gave de Pau to the Pyrenees.

“Gave” is the local name for a “torrent” originating from melting snow in the Pyrenees, and the river warrants that name in places as it bubbles along.  Its source is in the Cirque de Gavarnie, an area in the Pyrenees where the mountains form a semi-circle.

The area has been popular with the British since the 19th century, and there are lots of Spanish people too.  I got the impression that the area is thriving:  the nearby Lacq gas deposit has been bringing wealth into the area since it was discovered in 1951 and there is a research centre for the exploration of gas and oil in Europe. The university has helped to keep the place buzzing since 1972.  There are lots of facilities for sports and culture.

The tourist office on Place Royale is crammed with information about the area.  We found the booklet “Balade Urbaine: Pau, Capitale Royale” which describes a town walk taking around 2 hours 30 minutes but we had to shorten it to this circuit: Place Clemenceau – Boulevard des Pyrenees – Chateau – rue du Chateau – rue du Marechal Joffre – Place Clemenceau, and then a wander around the streets radiating from there.

A walk from Place Clemenceau to Boulevard des Pyrenees

Place Clemenceau was established as the centre of town life in Pau In the 1930s when the Palais des Pyrenees was built: two smart blocks of shops and apartments with a view across the Boulevard des Pyrenees to the mountains.  The “Place” is named after Georges Clemenceau, Prime Minister of France during the First World War.  It used to serve as a roundabout, but the area and roads leading from it are now traffic-free, spacious and peaceful.  There are good shops and a large department store, Galleries Lafayette. While we were there in October my daughter had a few rides on an old-fashioned carousel which was running in the evenings.  She also played dodge-the-fountain. 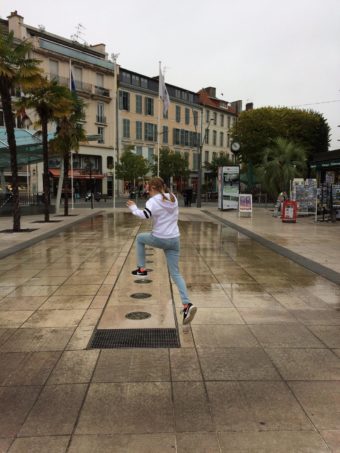 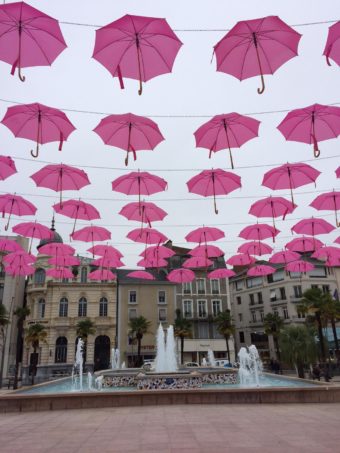 From Place Clemenceau walk straight between the twin buildings of the Palais des Pyrenees, as far as you can, and ahead of you is the Boulevard des Pyrenees.  Turn right and start walking up towards the castle.  You’ll need plenty of time to stop and take in the views.

The 19th century French poet Alphonse Lamartine wrote “Pau est la plus belle vue de terre, comme Naples est la plus belle vue de mer”.  On a clear day the view from the Boulevard is indeed breathtaking.  The first time I walked onto it I was stunned: it feels like the town’s south facing balcony onto the Pyrenees.  You can see palm trees and flower beds just below the Boulevard, then the smart railway station and river Gave de Pau, then the Jurancon hills planted with woods and vineyards dotted with the roofs of villas.  And in the distance, unless there is low cloud, a fantastic panoramic view of the Pyrenees which changes from day to day.  The view is best when there is snow on the peaks.  Plaques attached to the railings identify the different mountains and their heights.  The most prominent one is the Pic du Midi d’Ossau, at 2,2884m by no means the highest mountain in the Pyrenees but the one with the most distinctive shape when viewed from the north: like a cone with two peaks.  Here it is on the left. 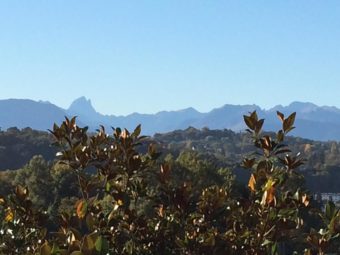 In 1891 the engineer Jean Charles Alphand stated that “Il manque a Pau la promenade des Anglais a Nice”.   His subsequent construction of the Boulevard, with its grand viaduct arches supported by 49 columns, took from 1894 to 1900 and ressembles an enormous platform built into the cliffs above the river Gave de Pau and railway station.  At the time it was built, the upper town was occupied by rich tourists and the lower town by the station, a tram factory, a textiles factory and a flour mill.

The Boulevard stretches 1.8 km from the Parc Beaumont in the east to the Chateau in the west.  A 30m funicular railway was added in 1908 to link the Boulevard (near Place Royale) to the railway station and give travellers an easier access to their hotels and villas. It’s now free of charge and fun for kids to ride up and down on.

Some grand buildings line the north side of the Boulevard.  When the Hotel Gassion (on the approach to the castle) was built in 1870 it was the most modern in Europe.  Its grand ballroom and jardin d’hiver had to satisfy some very demanding guests.  It’s now been converted into apartments, which are surely very expensive.

As you walk along the Boulevard you’ll find it hard to resist stopping at a café for a drink or snack and to take in the sweeping views.  Despite the majestic scenery this is usually a quiet, relaxing place and I always expect to see the sea when I look over the railings. 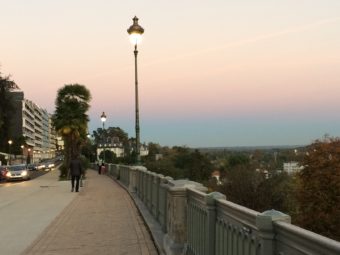 From Le Chateau d’Henri IV back to Place Clemenceau

The Chateau is a mainly Renaissance building thought to have originated in the 11th century, as a defensive fort built by the rulers of the ancient region of Bearn.  It was built to protect the ford there; a strategic point for access to the Bearn valleys and Spain.  It controlled the passage of shepherds to and from the Pyrenees.  The name “Pau” comes from the Bearnais word for the wooden stakes making up the fence around the castle grounds.

The town started to develop as a village around the castle.  The castle towers date from the 12th and 14th century.   By the 14th century the town consisted of 4 roads and about 128 homes, all in the castle district.  By the 15th century the castle had been transformed into a residential palace for the kings of Navarre.  The future king Henri IV of France was born there in 1553 and if you go on one of the daily guided tours (in French) you can view his tortoiseshell cradle.  Apart from the cradle, tapestries and furnishings from the 16th to the 19th centuries can be seen on the tour.  Otherwise you can enjoy the outside of the castle, with its formally laid-out lawns. 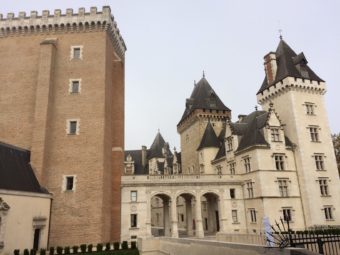 “Le Petit Train” starts its tour of the town on the road just outside the castle and runs from early April until the end of September.  The tour lasts 35 minutes with commentary and runs several times a day.  I’ve never done this but the tour map covers points of interest all over the town and I’m sure they would give you an idea of what you’d like to look at more closely.

The castle district or Quartier du Chateau has narrow streets and grand 17th architecture with restaurants and little shops. 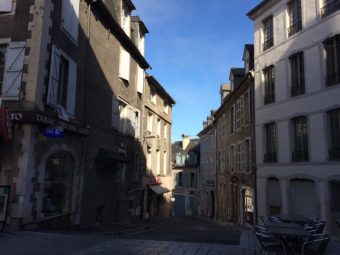 The Rue Joffre, which takes you from the castle district to the Place Clemenceau has been a shopping area since the 16th century and even more so since the 19th century when Pau became a popular holiday destination.  It’s a quiet pedestrian zone, very relaxing for a stroll.   Some artistic window displays drew us in and we succumbed to delicious hot chocolate and macarons (on separate occasions).  The chocolate shop was called Atelier du Chocolat.  Here you choose the type of chocolate you want from a large selection and they melt it into the milk for you.  Yum.  We saved the smart take-away cup it came in. 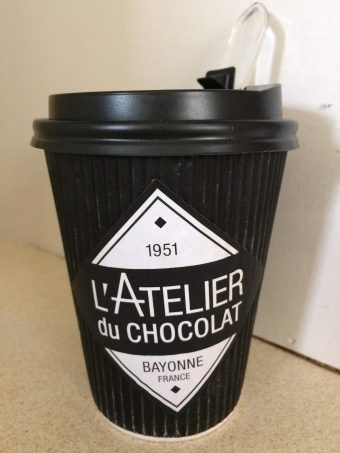 Once you leave the historic castle district and the rue Joffre, most of the buildings you see in Pau date from the 19th century onwards.

At the beginning of the 19th century Pau entered a sort of British era, sparked off by Wellington at the end of the Napoleonic Wars. He left a garrison in Pau in 1814 after fighting a battle at nearby Orthez.  His troops liked what they found and spread the word when they got home.  Then a Scottish doctor called Alexander Taylor visited and advocated Pau’s mild climate for a winter cure, having recovered from typhus while he was staying there. He even has a road in Pau named after him.  The town became a winter refuge for rich northern Europeans who fell in love with the place.

The tone was set by the British, who built villas and luxuriant gardens there and introduced pastimes like fox hunting and bridge.  The continent’s first golf course was built there in 1856.  The railway station below the Place Royale brought even more visitors from 1863 onwards.   St Andrew’s English church was built in 1886.  The British heyday in Pau was La Belle Epoque, lasting from about 1871 (end of the Franco-Prussian War) to 1914.  After that the First World War brought this luxurious climate tourism to an end, but some of the villas and gardens (such as Parc Lawrence) are still standing as a reminder of these wealthy people and their extravagant balls and horse racing.  “I’m from an English family,” said a lady serving me in a shop.  “My ancestors came over at the time of Napoleon”.

The area has continued to be popular with British people working or retiring in France.  There’s a society for “Anglophones” with all sorts of activities from book clubs to walking, and the Victorian church of St Andrews holds services every Sunday.  It’s like an English oasis on the rue O’Quin.

I can see why Brits like to live here.  It’s a lovely town with a lot to offer and a mild climate, not too far from the UK.  If you’re visiting, I’d say autumn is a good time to come.  The daytime temperature was at least 20 degrees when we were there.  And you’re not far from the mountains and the sea, so really there’s enough to do for a few weeks…