The Holy Island of Lindisfarne is a “tidal” island off the north east coast of England – it’s only an island when the tide is in. The rest of the time you can reach it by driving over a 2 mile stretch of sand and mud flats. Driving along this causeway feels like escaping the ordinary world and going somewhere special, especially if, like me, my husband and teenage daughter, you haven’t been outside the UK for a couple of years. We spent a sunny afternoon on Lindisfarne in September 2021.

My husband grew up in Newcastle, and so the “Holy Island” was near enough to be a day trip for his family. My interest in Lindisfarne was sparked not through travel, but through studying Old English as a language option at university. That was when I learned about the Lindisfarne Gospels, the most spectacular manuscript to survive from Anglo-Saxon England. It was created on the island in around the year 715 – 720. I viewed the Gospels at a London exhibition a few years ago and could hardly believe how well-preserved they were, and how detailed the illustrations. 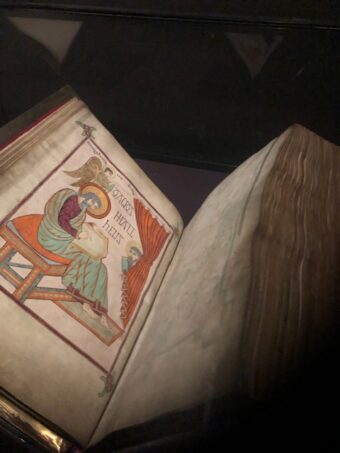 The book is normally kept at the British Library but it’s sometimes brought back to its home in the north east on loan. It’s due to go on display at the Laing Art Gallery in Newcastle Upon Tyne in 2022.

The other thing that interests linguists about Lindisfarne is the origin of its name: it’s a mystery.  “Lindis” could be from the Celtic name for a stream or pool nearby, and “farne” could be from the Old English “farena”, pilgrims or “faru”, journey.

The first islanders on Lindisfarne

The first settlement on the island was the Lindisfarne Priory, founded in AD 634 by Saint Aidan. He was the leader of a group of Irish monks sent from the community of Iona off the west coast of Scotland. They established Lindisfarne as the main base for Celtic Christianity in the north of England, probably encouraged by the fact that Northumbria was the most powerful of the Anglo-Saxon kingdoms. The monks’ aim was to spread the Word and convert the northern Anglo-Saxons from paganism to Christianity.

How the Lindisfarne Gospels were created

The manuscript was the sole work of a monk called Eadfrith, bishop of Lindisfarne from 698 – 722. He copied it in Latin, but during the late 10th century a monk called Aldred added an interlinear/marginal Old English translation to Eadfrith’s Latin texts, which gave them added value as the earliest surviving Old English copies of the Gospels. You can see a page of Eadfrith’s work, with Aldred’s Old English annotations, in the photo below.

The monks made the pages for the book out of calf skins. Eadfrith wrote the text in a dark brown ink and illustrated it with rich colours from animal, mineral and vegetable sources, some from the local area and some from as far away as the Mediterranean. He combined Celtic, Germanic and Roman elements to design animal patterns (especially birds) and geometric motifs. The St Matthew’s Gospel text opens with a portrait of the evangelist, as you can see in the photo above. The initial letter for each gospel was so elaborately decorated that it formed a picture in its own right. One technique Eadfrith used involved applying tiny dots of red lead to make intricate patterns or form outlines. He needed about 10,000 dots for every page, so it’s not surprising that it took him 10 years to complete the whole work.

When Eadfrith had finished, the monks bound the Gospels into a hefty volume of several hundred pages. Their idea was to show off God’s creations and dazzle potential converts on missionary expeditions. Most people couldn’t read, and so it was essential to lure them with eye-catching illustrations. This photo is taken from “Anglo-Saxon Kingdoms”, the catalogue produced by the British Library for its exhibition in 2018. 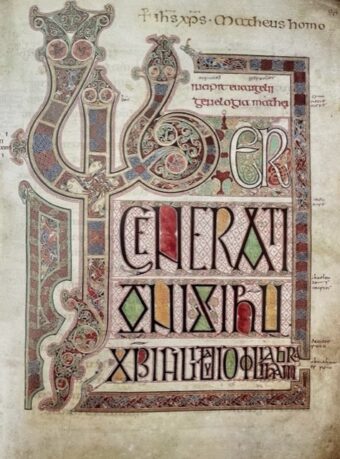 The cult of St Cuthbert

Later in the 7th century the famed St Cuthbert became bishop of Lindisfarne. He was believed to be extra “holy” and able to perform miracles. It seems he was a peaceful man who loved the birds and seals of the region, and in older age he retired to the peace and quiet of a tiny island next to Lindisfarne. The problem with “St Cuthbert’s Island” was that the monks could still contact him by shouting, so he moved further away to the Inner Farne Islands. He didn’t allow anybody to visit him there and he restricted his services to performing blessings through the window of his little cell. After he died in 687, he was buried on Lindisfarne and a constant stream of pilgrims wore a path along the courseway on their way to visit his grave.

The monks’ tranquil life on Lindisfarne continued until eventually it was shaken by a violent and bloody Viking raid in 793. This was the first of the Viking raids on England and it was brutal. The invaders raided the monastery, killing many of the monks and stealing precious artefacts. They kept coming back, and in the end the monks fled Lindisfarne in about 875, taking with them Cuthbert’s remains, the Gospels, and other precious relics. St Cuthbert was eventually buried in Durham Cathedral. Much later, in the 12th century, the second Lindisfarne Priory was established next to the site where the old one had stood, and it was built in honour of St Cuthbert.

Back to present-day Lindisfarne – if you get the opportunity to spend a few hours there, it’s a good idea to choose the best day available on your weather app but still take along good shoes, warm clothes and waterproofs. Maybe take food supplies if you don’t want to spend time waiting in a restaurant or café or at a food stand. And most importantly, check out the tide times, as you can only access and exit the island at low tide. As you drive along the causeway, you’ll see warning signs: “This could be YOU!” and pictures of cars half submerged in the sea. If you look beyond these scary pictures, the beautiful views of the island and coastline will show you why the area has been designated an Area of Outstanding Natural Beauty.

The region is ideal for birdwatching. As many as 330 different bird species were recorded on Holy Island during the year 2016. The whole area has been designated as a National Nature Reserve to safeguard wintering bird populations. Thousands of Brent and Barnacle Geese spend the winter there; 45 species of waders and 24 species of migrant warblers have been spotted. Apparently if you’re a bird watcher, you might be lucky enough to observe a Bartailed Godwit or a Western Subalpine Warbler! Bird watching sites on the island are located here.

The two Lindisfarne Priories and the Museum

We visited the historic sites first, starting with the Lindisfarne Priory and Museum, run by English Heritage. Here you can wander around the remains of the 12th century Priory and imagine the echoes of monks chanting. The rooms are labelled so you can identify the monks’ kitchen or their dormitory. The massive fireplaces must have brought them huge comfort during harsh island winters. This Priory met its end in the reign of Henry VIII, when it was closed by order of the King’s commissioners.

In the Priory Museum you can learn more about the two Priories, the Lindisfarne Gospels, the cult of St Cuthbert, and the Viking raids. English Heritage have produced a book about the 12th century Priory.

The brilliant 7th century monk Eadfrith would have illustrated the Lindisfarne Gospels sitting in the original Priory, on the site of the parish church of St Mary, next door to the 12th century ruins. I wonder if Eadfrith had a fire to sit by, and whether he strained his eyes doing all that intricate colouring in by candlelight, whether he found it soothing, or even whether he had a roof above his head? 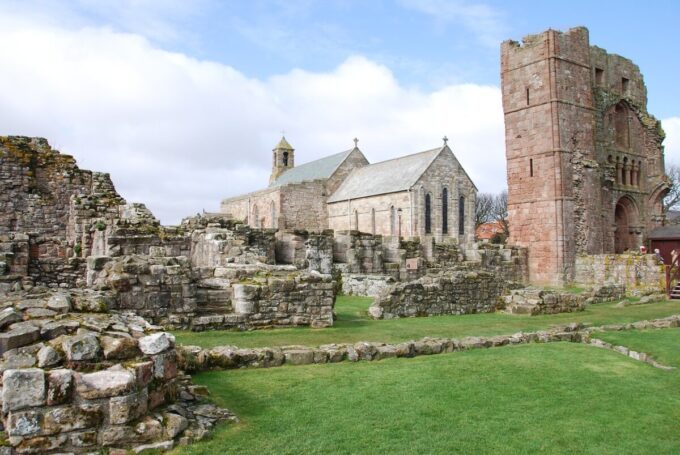 From the Priory site we walked on to Lindisfarne Castle, up a steep hill about a mile from the car park. It was built in 1550 to defend the English from continuing Scottish invasions. For many years after the castle was built the island remained a fishing and farming community, until  tourism started bringing the money in during the 20th century. The famous architect Sir Edwin Lutyens restored the castle in 1901 and converted it into a holiday home. The National Trust runs this tiny castle now, and you can visit the few rooms inside and enjoy the views from the top. Nearby are lovely flower gardens laid out in 1911 by the famous gardener Gertrude Jekyll. This photo shows the castle seen from the garden. 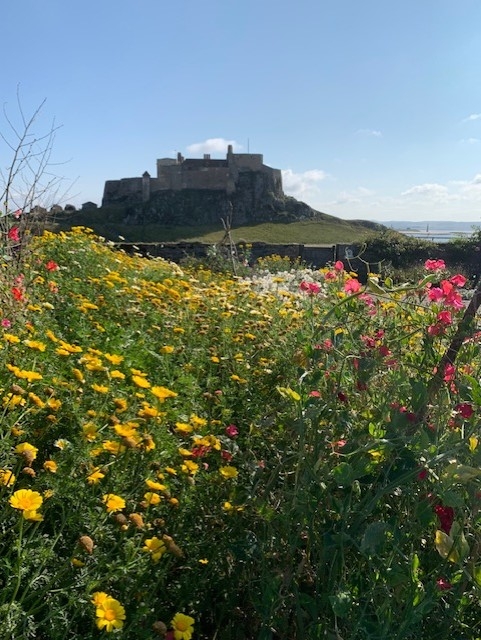 Our walk around the coast

The main aim of our visit to Lindisfarne was to walk around the coast of the island (about 4 or 5 miles) and enjoy some wonderful views across the sea to the Farne Islands. The best beaches are on the north coast, with vast expanses of sand. Most people stayed near to the car park and village, so we found ourselves alone here. A few walking routes are suggested on this local guest house website. 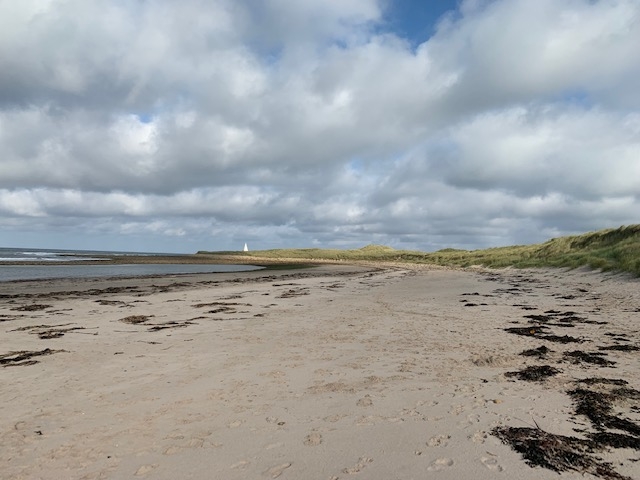 At the north east point of the island is the Emmanuel Head Beacon, a white brick pyramid-shaped structure built in 1810 as a daymark to stop ships crashing into the nearby rocks. 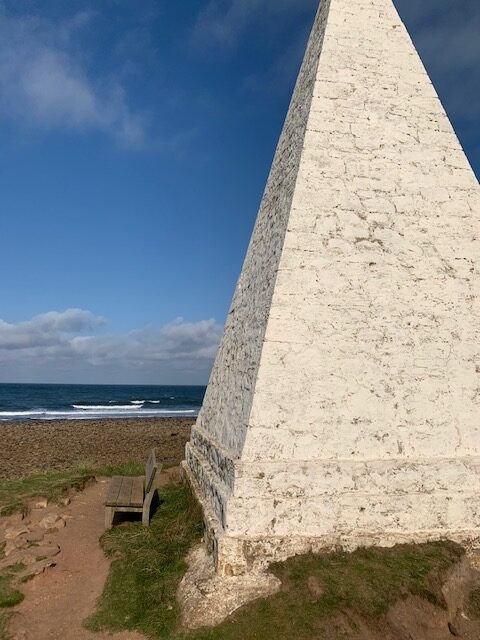 Just as we started exploring the beach where it stands, we heard a ghostly “hoooooo” wailing sound, and eventually spotted a group of seals who had come to rest on the rocks at the last high tide. We watched them from a distance, disappointed that we’d forgotten our binoculars. They’re likely to appear anywhere along the coastline, apart from in winter, and shouldn’t be approached.

Lindisfarne is a special place. It’s easy to get so distracted on the island that you lose track of time and miss the next low tide. Then you’re forced to spend a few more hours there …