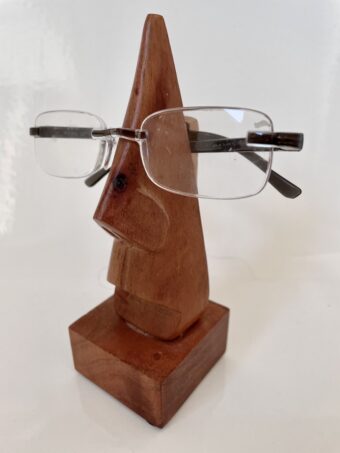 A perfect stand for glasses, and the solution to “Where are my glasses?”

“Lunettes” in French can be traced back to the 13th century, when the suffix  -ette was added to lune to make a diminutive noun meaning any object shaped like the moon.

“Brille” in German can be traced back to around 1300, when the lenses for monks’ glasses were cut from a semi-precious stone called beryl. Rather strangely, “Klobrille”, literally “loo glasses”, means toilet seat.

In English we can say glasses, or spectacles, or specs. “Eyewear” is quite a new word in English, only used in the fashion world or at the optician’s, presumably to make glasses seem like an aesthetic choice rather than a necessity or an encumbrance.

A brief history of “eyewear”

In the Middle Ages, it was monks who invented magnifying glasses, then spectacles to enable them to read, write and decorate religious scripts as they got older. Everybody else just had to put up with blurred vision, which must have been very limiting and potentially dangerous, but probably the least of their worries.

By the 19th century, many elderly and scholarly people were wearing glasses – that is, those who could afford them. Despite design progress, in the 1930s glasses were still considered to be medical devices and therefore socially humiliating. This stigma lasted for decades.

Nowadays we have better education and general health care, so most people wear glasses at some point and although they’re a bit of extra hassle, we would literally be lost without them.

Quote from my Dad: “Go to an optician and you’ll come away with a pair of glasses”.

During the pandemic I’d postponed getting my eyes checked, but after several reminder letters from the optician I made an appointment. I still had my Dad’s words in my head about entrusting the care of my vision to a shop. The ophthalmologist works in a cubicle at the back of the shop but I suspected him of being complicit in the ruse. This is how it went.

(At the end of my eye exam) Optician: “Well, your prescription has changed and you would be much happier with new glasses. These ones are over-correcting your vision.”

Me: “My eyes are getting better?”

Optician: “Yes, it sometimes happens when the eyeball changes shape and you get less astigmatism.”

Well, I took him at his word and ordered expensive new specs. I went back to collect them a couple of weeks later, just hoping he was right. I put the new glasses on and … I couldn’t believe it! Was everything really this sharp? At home I discovered that some of our clothes had been surviving a machine wash at 40° when the (tiny) instruction label actually said 30°.

How I got to this point (me and glasses go back a long way).

From blurry vision to glasses “for the blackboard”

When I was eight I was living life with the Famous Five, imagining (and even searching for) secret tunnels in every old building I went into. I didn’t realize I was paving the way to short sight by spending most of my time reading. By age eleven I had blurry vision but assumed everyone else had the same. Then there was the signpost on our way home from holiday which everyone else in the family could read, but not me.

As soon as we got home I was at the optician’s with my Mum, having my eyes tested. I came out with a prescription for a pair of glasses. “Just for reading the blackboard”, said the optician in a reassuring sort of way, as though there would be nothing else I would want to see properly. My Dad was relieved they were just for the blackboard, because he thought that wearing glasses made your eyes weak.

My parents paid for my glasses and spared me the “National Health” frames which came in translucent salmon pink or pale blue. After we collected them I wore them all day at home and marveled at my sharp vision. At school I lifted my desk lid as a shield and put the glasses on to show my trusted neighbour before I exposed my face to the whole class. I got used to my vision being blurry … sharp … blurry … sharp depending on whether I was sitting in the classroom or not.

Our family photo albums reveal the reason for my Dad’s aversion to glasses. They show grandparents wearing thick, round (and probably heavy) spectacle frames in their youth. These were recently in fashion again, but lightweight and in bright colours instead of black.  I couldn’t take them seriously at first, as they reminded me of my ancestors’ glasses, or the dressing-up glasses in my daughter’s toy box. I suppose the idea was that if you need to wear glasses you might as well make a feature of them.

By the 1970s the designs were getting more adventurous but it was a long haul to convince people that glasses could be worn as a fashion statement and they did not automatically make you into the sort of person who only read books. In the 1980s our family friend Pat still wore clip-on frames from the 1970s which she kept changing to match the clothes she was wearing: red hat, red coat, red glasses. “She did look a noddy”, said my Dad after we’d bumped into her at a local fete.

By age eighteen I was clearly (or not) struggling with my just-for-the-blackboard glasses and dangerously in need of wearing them all the time. But surely if it came to that, my glasses would become part of my face and everyone would think I looked odd without them? My Dad was convinced that if I wore glasses I would lead a lonely life. They would hide my eyes, add to my studious image and no man would ever look at me. One evening when we had guests he kept trying to catch my attention and gesture to me to take the glasses off.

So my next stop was Mr P the contact lens fitter. There I learned to overcome my natural blink instinct and place a plastic disc on the surface of each eye. My eyes produced copious tears the first few times I managed this. I had a special plug-in machine which sterilized the lenses daily by heating them up. At last I could see properly all the time, and over the years I changed my lenses as the science evolved. I went from hard (ouch) lenses to semi-permeable, to permeable, to soft, to disposable.

In those days it seemed that some people avoided wearing their glasses on first dates. They either wore contact lenses or they simply couldn’t see properly, not even well enough to see what time it was by looking at the other person’s watch if the conversation wasn’t going well. My blind date-who-didn’t-wear-glasses and didn’t want us to meet again inadvertently got on my commuter train a few days later and sat down opposite me. We were both wearing our glasses and pretended not to recognize each other.

Later I discovered that wearing contact lenses and looking after a newborn baby weren’t really compatible. The lenses were just too much faff. In any case, glasses disguised my tired eyes – and they weren’t actually clamped to my face, contrary to my teenage fears.

When my daughter was 7 and we were in the middle of a stressful house move,  she decided to wear glasses, to fit in with many of her friends. “My eyes keep going blurry,” she complained. I rushed her to Specsavers. When it came to reading the sight chart, her answers were inconsistent with normal vision but were not typical of any type of sight defect. The optician prescribed the lowest lens power possible and she ended up never getting those glasses she so wanted. It transpired that she was not the first child falsifying eye test results. The optician once had to pay a child 10p for every letter they “managed” to read on the bottom line of the eye testing chart. At primary school I’d been self-conscious about my glasses, but now it seemed they were something to strive for.

Most people get glasses when they turn 47 and have to stop blaming the size of the print or the poor light. Initially they feel better buying a magnifying glass, then they buy reading glasses from a stand in Boots. They wear them for reading, then as time goes on they need them for eating, then for doing the cleaning … For us myopics, there is no outward change, only the invisible change to varifocals. We don’t have to spend time looking for the right glasses: “Has anyone seen my glasses? …. No, not those ones, they’re the ones for driving, I need the ones for reading!”

Even my Dad had to cave in eventually: the print got too small, he went to the optician’s, and he came away with a pair of glasses.

DO YOU NEED NEW GLASSES? 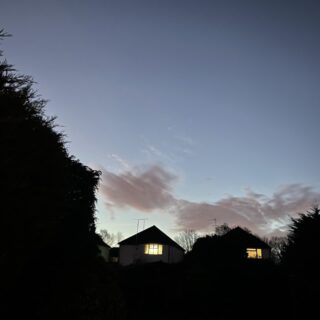