“Whisper this quietly so nobody can hear – this is your chance to play as well, before they go to school.”

Someone gave me this advice when our daughter was about 3 months old.  I’d already decided to play and explore with her whilst I had the opportunity.  It would be fun to slow down and “live in the moment”.  We needed to get to know each other, and anyway when else would I get the chance to chase down a hill in St James Park  or sing in the street, or make hand prints?

Of course, it’s important to spend some of the day with adults too.  At-home parents of babies need to socialize with other parents, and usually that includes going to baby or toddler groups.  It’s best to try various groups and decide which ones are for you – from my experience, they won’t all be!  The groups I chose opened up a new world to us and I made the most of them as everyone kept telling me how fast our child would grow up.  It was another way of enjoying time together and making friends with other young families.

Music is great for babies – and for parents,too

Here I’m going to concentrate on the parent and baby music groups we went to.  It turns out that parents benefit from these alongside their babies.  Scientists have discovered that singing releases chemicals called endocannaboids in the brain, which give us a feeling of well being and can “lift” the mood of new mums or dads who are suffering from low mood, anxiety or depression.  The same mental boost applies to humans of all ages who sing.   Gareth Malone is right!  Obviously the babies can’t sing yet, but their happy reaction to the music is proof enough, as I described in my posts Sing with your Baby and Sing with your Baby Part 2: baby on the move!

The music groups we joined had been established for years before we started attending them in 2005, and they’re all still going strong now, in 2019.

In looking for a music group, your first port of call could be the free-of-charge singing sessions at your local library, held once a week at different times depending on your baby’s/child’s age.  They’ll be called something like Rhyme Time or Wiggle and Jiggle.  Here’s the link to the Surrey Library website, but sessions are held in public libraries all over the UK.  A librarian or volunteer leads the action songs and you’ll get a warm welcome.  Most parents need these sessions to jog their memory so that they can sing with their child at home.  Not many people can remember songs from their early childhood, unless they have other small relatives or (like me) they’ve worked in Early Years education.

Other music groups on offer are local franchises and they’re more specialized.  If you want to try a class, they offer you a session free of charge before you commit yourself to paying for a whole term.  The teachers always come from a musical background and are committed to the franchise for that area, so they’re friendly and enthusiastic and have been trained to work with little ones.  Singing sessions include children’s percussion instruments, toys and puppets.  The songs are “catchy” – in other words you’ll still be able to sing them years later!  Some are traditional and others are adapted or completely new, in case you’re ready to expand your repertoire…

Classes are planned by experts in early childhood development, together with musicians.  Children learn as they play and the main aim is for everybody involved to have fun.  Sessions are based on active music-making and they build concentration, self-esteem and memory skills.

What to expect in class

In music groups, parents and carers sit with their little ones and act as role models to encourage them to join in.  Toddlers learn to leave their parent’s lap if the teacher “needs” a volunteer, knowing that they can return to security immediately afterwards.  As they get older they move a bit further away from their parent to dance to the music, and slowly gain their independence.

Some groups run summer holiday sessions where the older preschoolers stay there by themselves.  My daughter’s Musical Express holiday group made simple percussion instruments to go with the songs, and expressed themselves further by painting and constructing props for their music topic.  The topic was “Pirates” on that occasion – I remember the cardboard telescope and the island treasure map she brought home.

How to use what you’ve learned at home

Parents and children can play about with the songs they learn in the group.  They can add new words when they sing together at home, fill in the rhyming words and clap or play a drum to the beat of the music.  One idea I never tried is drawing while listening to music, to see what images it inspires.

These are the three music groups we went to regularly:

We joined our local Gymboree centre when my daughter was 9 months old and did a lot of our socializing there.  It was the first music group we joined. The class was on Monday mornings, good timing as we found ourselves suddenly home alone after the weekend.  Our lovely teacher was called Jodie.  We caught up with her again when my daughter was four years old and started attending her fun pre-school drama class at Gymboree Wimbledon.

The Gymboree website shows a video example of one of their classes and they describe their philosophy as “playful parenting” in a party atmosphere.  They use lots of colourful props in their sessions. 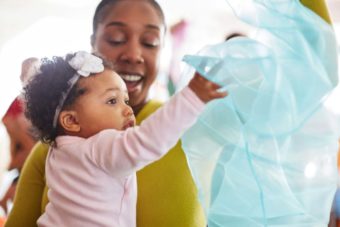 As well as music classes they also run classes in art, baby signing and “play and learn”, which involves guided soft play as well as music.  One day I was sitting talking to the teacher in the soft play session when we noticed a huge soft ball rolling towards us, all by itself.  We couldn’t see the driving force behind it: it was my daughter practising her exciting new walking skills.

Young children/babies are divided into these age groups at Gymboree music sessions:

The teacher uses children’s instruments and props to support lots of happy songs which parents can continue at home.  Babies learn melody, pitch and rhythm. 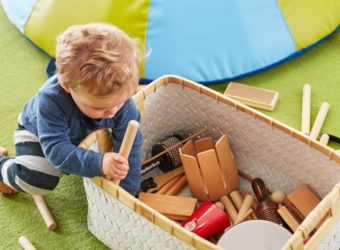 Dance is added to the mix, using different musical styles to encourage self-expression.

Turn-taking activities and games are added and listening skills are developed further.

When my daughter was about 18 months we couldn’t attend the Gymboree class any more so we started the Monkey Music classes in Beckenham, London.  We used to visit the local bookshop and Kelsey Park swans and swings after the sessions. I bought the CD of the Monkey songs; “When Monkey hears the music he goes up and down” was the first song our daughter danced to, bending her knees and smiling.

Songs, music and games support all aspects of early learning in these sessions. The music is mainly original, in case you’re ready for a change from the traditional songs!  My daughter was transfixed by these lessons and couldn’t wait to volunteer to “help” the teacher. 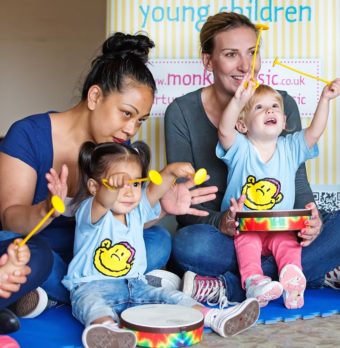 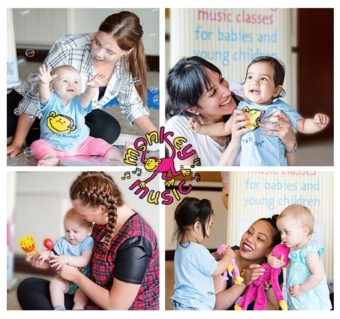 By 4 years children have a sound musical knowledge from these classes, and they’re ready to learn a simple musical instrument.  My daughter started using a colour code to play her Early Learning Centre saxophone.  She loved the independence of producing a melody herself.  Non-customers of the Early Learning Centre were astonished when she told them she could play the saxophone.

I’ll be writing about this company in a future post about baby signing – but I’m listing them here as well, because the classes gave us a lot of musical fun.  They concentrate on the same aspects as the other music groups we went to, but with ”baby signs” added to support key words in the songs.  Here’s their website.

Music in our lives now

All these groups aim to spark off an interest in music as a gift for life.  My daughter’s 15 now, and loves playing piano, singing and dancing.  Music is one of her favourite subjects at school and it’s an interest we’re able to share as a family.

As for the exploring together: we’re still having fun doing this, although we have less time for it these days.  The places and activities we explore are changing as she gets older.