In my last post, Sing with your Baby ,  I wrote about singing with babies up to the age of 6 months.  This time I’m writing about that stage between 6 and 12 months when babies are “on the move”: sitting, crawling and pulling themselves to stand.  Babies progress from lying on their backs to getting mobile in an incredibly short time.  At 6 months they’re starting to sit with support, and hidden away in their brains hundreds of new connections are forming every second.  This science article describes a study carried out in babies’ homes when they were 6 months old.  By showing the babies various pictures the researchers discovered that they were already able to link certain words and concepts.  The researchers emphasized the importance of treating babies as real communication partners to support their brain development.

An article published by Great Ormond Street Hospital for Children in London confirmed what “singing parents” already know: babies and children respond best to live music rather than recorded music.  And of course they prefer the voice to an instrument.  It’s about communication, so facial expressions are important, and we can vary these according to the child’s mood and to what’s going on in the song.  If we do play instrumental music, one instrument on its own is best – more than one at a time can be confusing.

Going back to the journals I kept about singing with my daughter, we rejoin the story when she was sitting up and enjoying a completely new view of the world….

Now she was taller, my daughter could sit on my lap and look straight into my face for the songs without having to pull herself up to standing.  If she knew there was a song coming she would flap her arms up and down in excitement.  A flap of her right arm came to mean she wanted more songs.  This action became a message to me, to tell me to “hurry up and get on with it.”

Many of the “smiley” photos taken of our daughter at this age were captured by singing to her. 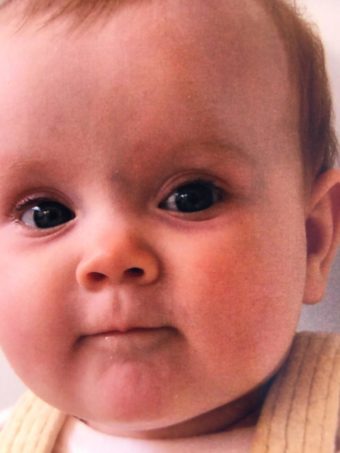 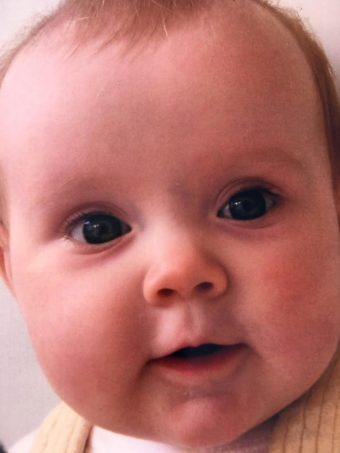 The song has started. 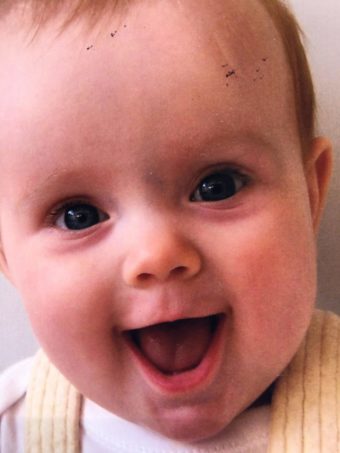 I bought a few CDs of children’s songs.  These couldn’t rival “live” singing because they didn’t involve any interaction, but they had a soothing effect on our baby if she was playing with her toys by herself in her “den” (playpen).  She would look at the CD speaker and smile if she recognized a song I’d been singing with her.  She smiled if the CD changed from singing voice to talking voice – from songs to rhymes or short stories.

To us adults, playpens look like cages for babies, but babies don’t see the bars that way.  I knew I could leave her there for about 20 minutes whilst I did something else.  I started getting her used to it before she was able to crawl, so she didn’t feel restricted.  She learned to spend a bit of time alone and the break was good for both of us.  She would be safe in there, and she had plenty of toys to play with and music to listen to.  The secret, I found, was to lift her out as soon as she showed signs of having had enough, so she felt in control.  Sometimes she would even fall asleep in the den.  Here she is listening to one of her music/story CDs. 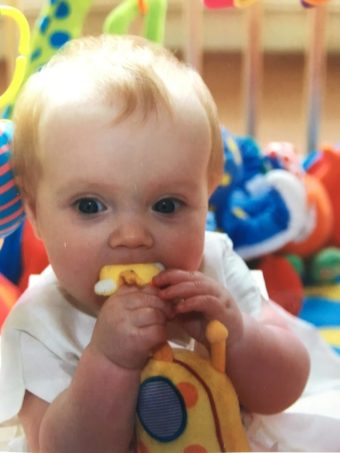 Once we were sitting together on the sofa singing our usual songs.  I started to sing the first song from Annie Henry’s CD: “Are you ready to sing a song with me?”  and she turned and looked at the digital display on the stereo.  She was telling me that she knew that the song was from the CD,  I made a positive response and so she knew we were communicating.

She still loved to sit on my knee facing me and listen and watch me singing.  There was one difference: unlike when she was younger, she sometimes looked around instead of at me all the time.  She was getting more interested in her surroundings,  because at this age babies can turn their heads about 180 degrees rather than only 90 degrees at two months old.

She still smiled when I said “Shall we sing a little song?  What shall we sing, what shall we sing?” Then I looked thoughtful: “Errrr…”  and she looked expectant.  When I started to sing she clapped her hands, one hand open and one hand closed.  This beginner’s version of a clap didn’t make a sound, but it still seemed to be fun.  She started clapping to show that she was happy.

We were sitting on the sofa, and I was singing one of her favourite finger rhymes “Five little ducks”.  She smiled when it started.  When she knew the rhyme was finishing – and the ducks were going to respond to their mum’s louder quacks by coming back – she clapped her hands and smiled.  She started crying, until I sang it again.  Then she was satisfied – I had responded to her request!  I started singing “The bear went over the mountain” and she recognized it within the first few words, smiled and clapped.

Rhymes and action songs are like miniature stories being acted out.  They’re the first stories a baby experiences – for us, a sort of precursor to the many puppet shows we were going to enjoy together later.

That same day she was sitting listening to her “Animal Fair” CD in her den, thumb in mouth and swaying as she was nearly asleep.  She also loved to lie back in her den, listening to the voice singing or telling a story.  This CD had a great mix of songs and stories.  If I read this list I discover that I can still hear them in my head; it’s like going back to a different world… 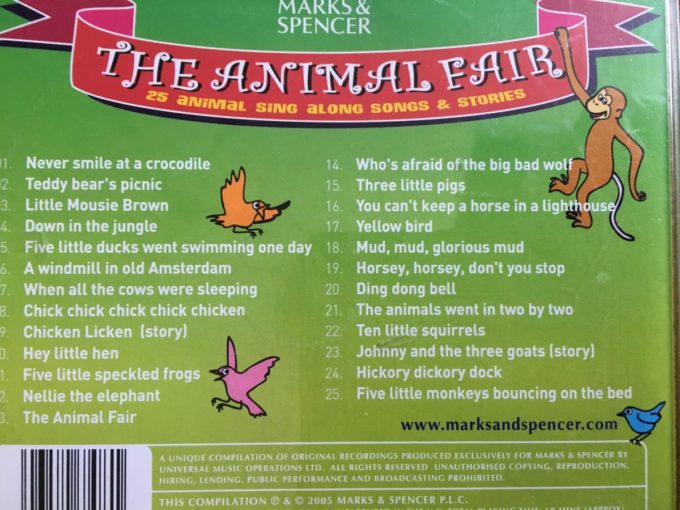 She smiled when the story of Chicken Licken started, and listened intently.  Then there were more songs, then the “Three little pigs” story – she smiled when the pig replied to the wolf: “No no, by the hair on my chinny chin chin, I won’t let you in.”

We started going to a baby music group called Gymboree Play and Music.  She stared at Jodie the teacher, and smiled every time she started singing.  At “The wheels on the bus” she turned to give me a big smile (“That’s what we sing at home”).

I sat with my daughter and sang some of our usual songs.  She smiled and clapped when each one started.  She especially enjoyed the ones which included clapping.  She still stared into my eyes to ask for songs and rhymes, but not so often now, as her world was expanding.  She had other interesting things to explore, away from me, crawling, and pulling herself up to standing.

In her “den” she lay back sucking her thumb and listening to her CD of short stories, each just a few minutes long.

Our baby loved her “live” songs and rhymes with me.  Her favourite rhyme was “Five Little Ducks”.  At the end, when the mummy duck quacked really loudly and the stubborn ducklings finally came back, she laughed, then cried because the little story was finished.

In my finger rhyme “Five little peas” she clapped in anticipation of the “pop” at the end.  For the song “Row row row your boat” she imitated the little scream at the end.  So she was just beginning to play an active part in the songs.  There was lots more eye contact and smiling at us.

Participating in songs led to participating in a game.  She played “Peekaboo” as the active person for the first time.  She was on the other side of the bed from where we were standing.  Daddy said “Where’s Baby, Where’s Baby?  Peeka….” She pulled herself up to standing and her smiling head bobbed up, Daddy said “Boo!” and we all laughed and laughed – at our first family joke.

With her new mobility, she was able to climb onto my lap for songs and a little sleep.  She also watched my songs from her highchair vantage point at mealtimes.

She loved the traditional children’s song “Wind the bobbin up, wind the bobbin up and pull, pull, clap clap clap”.  and clapped in anticipation when the song started.  I realized with dismay that this song originated from children working in the cotton mills.  Some nursery songs originate from 150 or 200 years ago, often evolving as they’re passed on.

From the lawn, she smiled at me as I stood in the window, and clapped.  She did that when she was happy or as a “well done” to herself or someone else when they managed to do something, like when her  baby cousin pulled himself to standing.

At Gymboree, she watched the teacher and banged the instruments for 25 minutes.  Normally she concentrated on watching the songs and only banged the drums at the end when there was nothing else to do.  For the “Five little peas” rhyme, she anticipated the “pop” at the end and clapped beforehand.

Singing is something which older relatives can join in with; it takes them back to when their own children were small.  Here’s Auntie Gladys singing with our daughter in the pub we once went to for lunch.  It filled a gap where boredom could have set in, but more important than that – the two of them were communicating, forming a bond and having fun together.  We had come a long way: from me trying out a song on her at 7 weeks, to singing “on demand”, to recorded songs, to baby music group, to singing in the wider world. 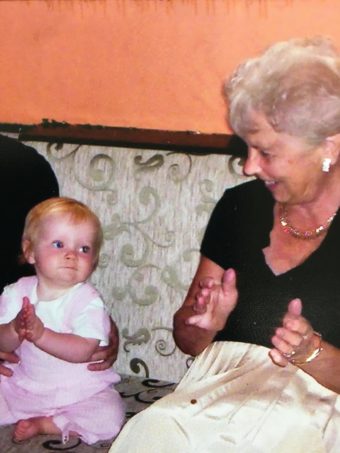 « Sing with your baby
“Dictionaries can be dangerous things” »