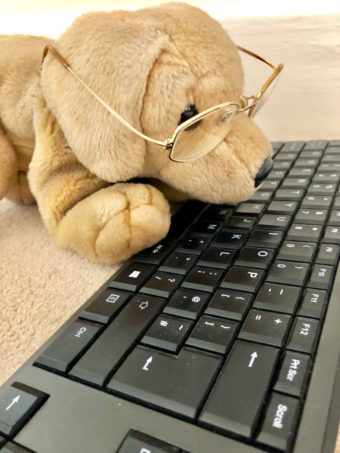 Our relationship with the QWERTY keyboard has changed a lot since the 1980s.  In that decade huge progress was made with typing machines: manual and electric typewriters gave way to word processors and then PCs.  Kids nowadays are good at typing but would probably not recognize a typewriter.  Not unless they’ve read this book: 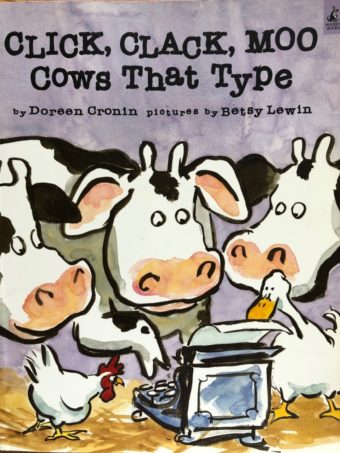 This is a brilliant picture book by Doreen Cronin, with illustrations by Betsy Lewin.  When my daughter was little we read it loads of times, but I still laugh out loud when I read it.  I’ll just say it’s a story about a farmyard strike.  My favourite line in the story is “Duck was a neutral party, so he brought the ultimatum to the cows.”

Anyway, back to the 1980s.  In those days women graduates were warned not to learn to touch type.  There was a fear that if you learned to type, you would “end up as a secretary”.  The job of Bilingual Secretary (or Secretary Linguist) was an exception as it gave you higher status.  Working as a secretary in the arts field could also offer you a pathway into a more creative job.  And plenty of women enjoyed secretarial work and were given a lot of responsibility.  But men never learned to type; they left that to their secretary or to the women in the typing pool.  Nowadays men can’t stop typing, hunched over their laptops in Costa or their phones on the train.

Back in 1987  I learned to type and I worked for six months at a long defunct bank in the City of London.  I was secretary to the two general managers.  Please note, their names have been changed for this story!  There were two main aspects to the job:  translating specialist financial material, and being a servant to the two men.  1987 was the year after the “Big Bang” in the City of London.  The first PCs were arriving in the bank, and everyone was struggling to learn to use them.

Tom smoked cigarettes all day long.  On my first day his lunch guest was late, so he strolled out to me with his head in a cloud of smoke, asking “Where the f*** is my lunch guest?”  This gave me an idea of what was to come.  He dictated letters to me with his feet on the desk. Afterwards I had to type the letters on a machine called a word processor, really really hoping I’d be able to make sense of my shorthand notes and compose a letter which Tom would recognize.

The worst task Tom gave me was to send flowers to his wife on their wedding anniversary.  I think I got the accompanying message wrong and this contributed to my dismissal after the 6 months’ probation period.  The other incident which didn’t help me was when an anonymous tabloid journalist phoned me to ask for confirmation that Tom’s ex-wife was having an affair with an actor from a soap opera.  I didn’t know anything about that, so there was no way I could have told him anything.  That didn’t stop the journalist from writing: “A spokesman for Mr X said…”.

Jerry smoked cigars.  He would call from his office: “Jane, cough, cough, I’m so sorry to bother you…”  On one memorable occasion, he entertained his freemason friends to a long lunch in the bank’s dining room.  He walked back to his office unsteadily and all he could do was ask me to book him a taxi to his home in Essex. I had to book his family holidays for him.  One time I had to get his shoes repaired, but this was nothing compared with Tom’s broken shaver.   At least he didn’t give the shaver to me. The bank’s messenger was instructed to return the shaver to the shop where it was purchased, only to be told that it didn’t work because it was full of Tom’s shavings.

Tom and Jerry would eat their lunch in their respective offices, and I would have to collect their dirty plates afterwards, complete with cigarette ash, and scrape them into the bin in the kitchen.  “This isn’t really the job for you, is it Jane?” said my new friend from HR as she watched me flip open the pedal bin.

The one perk to that job (apart from my friendly, supportive colleagues) was that I was regularly invited to lunch at smart hotels, by charming salespeople hoping to get lots of business from the bank. There was indeed such a thing as a free lunch!  As both my bosses regularly took 2 hours for lunch, I followed suit on these occasions, but it didn’t quite work like that and this also contributed to my dismissal.

On the day of my dismissal Jerry was out of the office and Tom didn’t bother me with anything.  I sneaked off at lunchtime for an interview for another job – and when I returned Bob, the affable head of HR asked to see me.  It turned out he’d been given the task of telling me the Bad News.  He said the reason I hadn’t seen Tom was that he’d been using the fire escape to go downstairs rather than walking past my desk.  “Have you told her yet?” he’d asked Bob.  The foreign exchange dealers had all been puzzled to see Tom sitting with them in the dealing room reading the paper.

I hadn’t passed my probation because Tom claimed I had “the wrong priorities”.  The bank generously gave me three months’ extra pay as a “sweetener”.  This didn’t stop me from enjoying another free lunch at a posh hotel the following week, and a week-long banking course which the bank’s HR had enrolled me on before they knew they were going to sack me.

Through typing I “ended up” in a few other interesting jobs.  I did “temping” for about 10 different organisations, which gave me short insights into workplaces (and people) no other skill could have provided.  At a company called Corporate Development Consultants I typed up reports with names like Corrugated Cardboard and Labelling in Western Europe.  I had no idea there was anything as boring as that.

I worked as PA to the kind and friendly director of a German company which manufactured all sorts of endoscopes: did you know they can also look into engines and under the earth as well as down your throat?  The director gave me plenty of responsibility: I helped to recruit new office staff and I translated information about the very latest medical instruments.  Very often I was the first British person to find out about an instrument which had just been launched on the market.

Well, it was a good idea to learn to type, because it comes in very useful.  I type so much nowadays that my handwriting has deteriorated.  It’s essential for my translation work – and for writing stories about some of the adventures I’ve had.

« Music groups for babies: generating a lifelong interest
A train journey to Jungfraujoch: the Top of Europe »