Quote from my husband: “It’s just a little baby – that’s all it is!”

Gareth Malone’s “The Choir” programmes have proved that singing is energizing, fun and sociable.  It’s known to be good for our mental health.  It helps with memory and language learning.  But what about singing with a baby, before the age of six months, before they can even sit up?  In the early weeks babies seem to be sad quite often –  when they’re uncomfortable or hungry – and if singing to them makes their lives more fun, it’s a winner as far as I’m concerned.  Happy baby = happy parents.

Scientists have researched the calming effects of singing on babies.  According to a BBC report in autumn 2013, researchers at Great Ormond Street Hospital, London found that traditional children’s songs such as “Twinkle Twinkle Little Star” and ”Five Little Ducks” reduced pain and improved well-being in sick children under three.  The researchers measured the impact of the songs on the children’s heart rate and pain response levels.  They compared this with the impact of sharing a book with them.  The singing proved to have a far more relaxing effect.  A neurologist explained the reason for this: the singing was directly stimulating the emotional part of the brain, whilst the cortex was analysing the melodies.  The conclusion of the research was that music therapy should play a greater part in children’s hospital treatment.  From these findings we can conclude that singing must be beneficial for all babies and children, whether or not they’re ill.  It simply makes everyone feel better.

Just as I’m thinking about this, a song pops into my head: “Little Peter Rabbit had a fly upon his nose” – and it’s on repeat.  My brain has scrolled back to when my daughter was a baby.   The song won’t go away, and now I’m remembering all the actions that go with it …

I started off singing with our baby for just one reason.  It was to see if she would like it – and I ended up singing on demand!  “All she wants is to be sung to all day,” said my husband after a few weeks of songs.  The following is the story of how that happened.

“Do you sing to her?” asked my friend Adele, who visited us when the baby was 7 weeks old.  No – I hadn’t thought of singing as early as that.  I’d read that babies can hear the rhythm of their mother’s voice in the last trimester of pregnancy and they can recognize her voice when they’re born, but I didn’t act on it because it was so hard to imagine.  Then I remembered the vast repertoire of children’s songs I’d had when teaching signed singing to deaf children.  I dug out my old song file from a box in the attic.   I tried one song just to see whether she would like it and I felt a bit silly as I thought she was too small to show any reaction.  I sang the song regularly to see if she would grow to enjoy it.

I had no idea what I was letting myself in for.

Three weeks later, at 10 weeks old, she was well into the singing.  I was holding her on my lap and she was facing me, eyes wide, tongue moving – hoping for a song.  When the song started she gave a big smile.  She’d already been showing happy reactions to all sorts of things, like seeing us when she was crying in the night, being put in the pram or getting ready for the bath.  So the songs were a bonus.  At 10 and a half weeks she started sleeping through the night.  It was all quite tiring.

Before you conclude that I have an incredible memory, I have to admit that this was the same week I started a journal – at 10 weeks.  I scribbled down whatever struck me about the singing, and about everyday new-mummy life in general.  It was a way of keeping hold of it all.  “You won’t get this time back again”, said my mother-in-law.

We’ve got a video clip of the singing.  I expect all parents look at footage of their kids as babies and think: “Is that really the same person?” because they’ve grown in front of your eyes.  On the screen our daughter, transformed from teen to small baby, is watching my face intently, moving her mouth and tongue as she watches me sing. 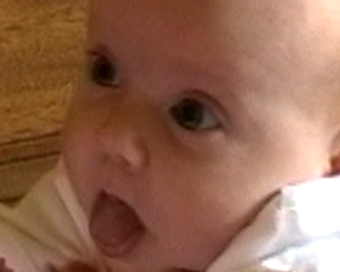 It was all a bit “full on”, because I knew so many songs off by heart, with actions, and she so obviously loved them.  The present-day version of my daughter laughs in amazement when she sees the video: “Is that really me?”

I’ve picked out the notes in the journal that refer to the singing, and added a few other details to give them some context.  It’s hard to separate the singing from all the other communication that was going on, including the baby signing and the languages and the general chat.  Phew.

By 12 weeks our baby had managed to get me into a proper singing routine.  It seems like sometimes my singing was quite amazing. 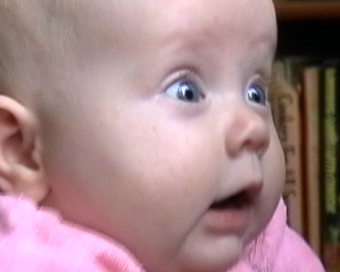 On my lap, she liked to “stand” to bring herself up to my eye level.  As I was holding her under her shoulders, she pushed herself up easily with her legs.  From there she stared intently into my face.  Me, to a visiting friend: “Just a minute, she’s asking me for a song!”  And to the baby: “Shall we sing a little song?  What shall we sing?”  I always got an excited reaction, and smiles when the song started.  She opened her mouth and gave a sort of giggle noise as she breathed in.   A few days later she started to smile as soon as I asked the question “Shall we sing a little song?”.  She knew what was coming.

By 15 weeks she loved finger rhymes as well as nursery songs.  There was anticipation involved in “Five little ducks went swimming one day”: she looked for what the “ducks” would do next.  The same thing applied to the finger rhymes “Here is the beehive, where are the bees?” and “Two little blue birds”.  Once she was familiar with the rhymes, along with the sequence of the actions, they all made her smile because she could predict what was going to happen next.

At 16 weeks  I added some large-scale action songs.  For these I had to be standing up.  My daughter liked to watch them from the premium seat, her bouncy chair in the kitchen.  I became her personal children’s entertainer as I prepared the dinner.  She gazed at me then smiled when each song started – “I’m a little teapot”, “Heads and Shoulders”, “The Easter Rabbit”..   Just like the finger rhymes, the actions explain the meanings in these songs.  So for hearing kids there’s really not much difference between signed songs and action songs.  The vocabulary range from all these songs was wide enough to include most of the words from a baby’s or toddler’s world.

In her moses basket, in the morning – she lay waiting, looked up and saw us, smiled and made a chuckling noise, throwing her arms up at her sides.

At 18 weeks, facing me as I held her on my lap, her standing up technique never failed.  She pushed with her feet, swung her arms out and backwards and stood up easily.  I held her upright.  These regular squat exercises were making her legs look very strong.

At 20 weeks, I was singing the classic children’s song everyone knows: “The wheels on the bus”. She smiled at each set of repeated sounds, like “beep beep beep” for the horn and “swish swish swish” for the windscreen wipers.

At 21 weeks she cried and waved her arms at her sides when I finished a song, then brightened up when a new one started.  For the song “Heads and shoulders knees and toes” I sang the action song and did the actions on myself, then on her.  When my cold fingers touched her near-bald head she smiled, closed her eyes and squealed.  She loved finger rhymes especially when I kept the yellow washing-up gloves on to add a bit of variety.

At 5 to 6 months our daughter cried when one song stopped, then smiled when the next one started.  She loved the little songs and finger rhymes.  She stared at my eyes and mouth while I was singing.

In the meantime she was trying to turn herself over from lying on her back, and would soon be on the move (my next blog post about our singing).

I read an interesting article about why interaction must come before language.  Right from birth, babies are using eye gaze, facial expression, sounds and actions to communicate with us.  Our baby was using all these things – staring, smiling, moving her mouth and tongue, crying, squealing, giggles, arm actions – to get me into the singing routine she wanted.  None of these things had any meaning until I responded to them, with enthusiasm.  Then she started to send the messages intentionally.  That’s how back-and-forth interactions start, and babies develop their pre-language communication skills.

Singing was definitely making our baby happier, and it probably improved her mood the rest of the time, not just when she was listening to the songs.  If the going got tough she knew she could always ask for a song!

« Realizing childhood dreams
Sing with your baby part 2: baby on the move! »