We’re getting deeper into autumn now and nature’s making it obvious. It’s easy to take beautiful tree photos this time of year, but this one’s rare: it’s a mist photo.  I took it in our local park at around 8 am.  The mist was hanging in a sort of ribbon which divided the scene in front of me into a trees-and-sky section and a ground section.  Apparently when it’s cool enough at night for dew to form on the grass and there’s just a gentle breeze in the morning, the tiny droplets waft upwards and you get a layer of low cloud like this.  I’ve heard this said about it in German: “Die Füchse kochen Kaffee” – the foxes are brewing coffee. 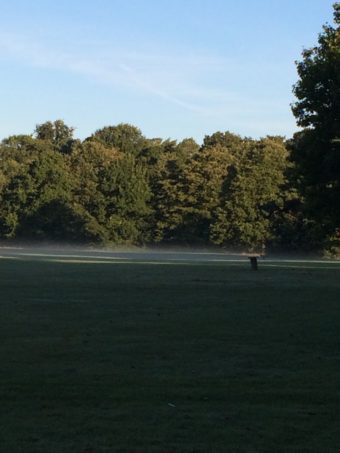 It’s National Poetry Day today (4th October), and my mist photo reminds me of this short poem, Septembermorgen, by the German romantic poet Edouard Mörike.  He wrote it in 1827.  It describes my photo perfectly!  In English we distinguish between “mist” and the more severe “fog”; similarly in French between “la brume” and the more severe “le brouillard”.  In German you don’t often hear the word “der Dunst” for mist: “der Nebel” is generally used.  Mörike refers to the mist in his poem as a “Schleier”, or veil.  In my photo the mist does actually look like a bride’s delicate veil.

Just re-read this poem if someone tries to tell you German isn’t a beautiful language.  You can listen to it here.  I remember it from A Level German lessons when I was a sixth former.  It was pinned on the book cupboard door and I don’t think we ever discussed it but I liked just reading it there.

The translator Charles Cingolani translated the poem into English in 2012:

The woods and fields dream on:

Soon you will see, when the veil falls,

The blue heaven in all its splendour,

And a world in autumn colours

Stream forth in molten gold.”

Then I thought of the beginning of Keats’ poem To Autumn, which he wrote in 1819:

“Season of mists and mellow fruitfulness,

Close bosom-friend of the maturing sun,

Conspiring with him how to load and bless

With fruit the vines that round the thatch-eves run;

To blend with apples the moss’d cottage-trees,

And fill all fruit with ripeness to the core;

You can find Keats’ fruitfulness in an orchard or in your local greengrocer’s shop.  The fruits there look and smell and feel so much nicer than the ones trapped under plastic masks in the supermarket.  I like picking our own fruit: usually blackberries, and this year’s ones were delicious but they finished ages ago – they’ve reinvented themselves as a fruit of high summer.

On the other hand plums are definitely an autumn fruit.  We used to have a family dog who adored plums.  The branches of our plum tree were hanging low with the weight of the fruit one autumn, so my Mum propped them up with a garden chair.  Later she was puzzled to find plum stones scattered on the grass surrounding the tree.  It turned out the dog was using the chair to climb up the tree to branch level, then scoffing the plums and spitting out the stones.  Her nose even detected plums left on a window sill to ripen – from the other side of a closed door.

German plum cakes and how to make them

Back to the present: I’ve made several German plum cakes this autumn, as they bring back happy memories of September in Germany with that delicious, sociable tradition, Kaffee und Kuchen.   I remember visiting friends I hadn’t seen for a long time, the smell of the yummy plum cake wafting from the oven, the anticipation of sitting around the table and catching up on all the news.  Plum cake is everywhere in Germany at this time of year.  Germans never seem to actually buy their plums (Pflaumen, or Zwetschgen) – they seem to get truckloads from their own gardens or from friends.  Are there really lots more plum trees in Germany than there are in the UK?

Here in the UK, I was a bit in denial about the arrival of autumn.  I was too slow off the mark to get the dark purple damsons, which are closest to the kind of plums Germans use for their baking.  The UK damson season is really short – it seems to be over by mid-September.  Damsons have a lovely intense flavour when cooked, but unlike other types of plums, they’re a bit too sour to eat raw.  As the damson season was finished, I started off with Victoria plums, which are much paler in colour but very tasty, whether eaten raw or cooked. 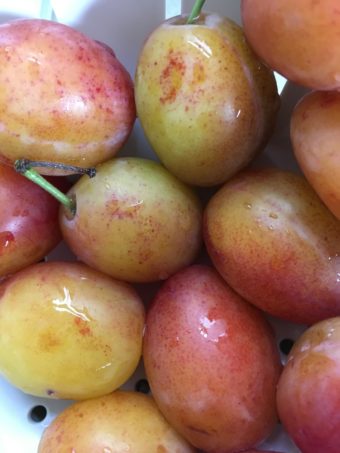 By the beginning of October, Victoria plums are finished but I found those round, purple Spanish and Italian plums still hanging on at the greengrocer’s.  They make a very nice cake too.  You can also substitute greengages for plums in all the plum cake recipes.

As a base for plum cake you can use Mürbteig, which is sweet pastry (a shortbread mixture with an egg added); or you can use Eischwerteig, which is a Victoria sponge mixture; or Biskuitteig, which is a fat-free sponge. I’ve tried them all, but my favourite is the traditional German “Zwetschgendatschi” plum cake.  I followed this recipe, in English.  The resulting cake was delicious, although I ignored the writer’s instruction to arrange the plums with their cut side downwards – in Germany, this would be “unerhört”!  Definitely not on.   The cut side of the plum is meant to absorb the sugar and cinnamon coating as it cooks, so it should be facing upwards.

Zwetschgendatschi is made on a baking tray, which you cover with a sweet bread (yeast) mixture, “Hefeteig” in German.  After leaving it to rise you simply cover it with ground almonds if you like them, then rows of sliced fruit.  Sprinkle it with sugar and cinnamon, like this 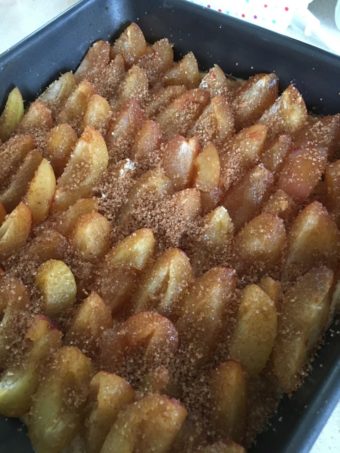 and when it’s cooked eat it still warm from the oven, with whipped cream, some friends and a cup of coffee.  Very “gemütlich” – it would be worthy of  the Danish “hygge” concept. 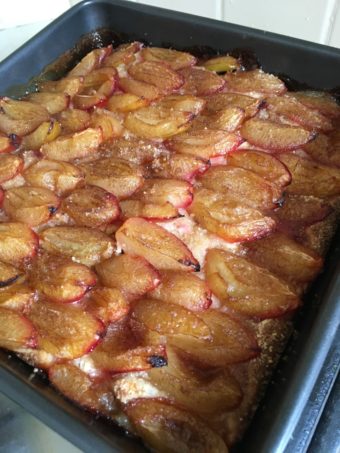 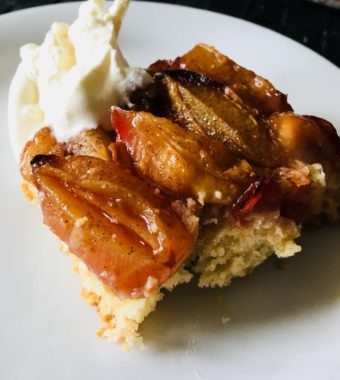 You can use any kind of tin you want really.  You can sprinkle a Streusel (crumble) topping over the plums if you want, but I like them without.  There’s something refreshing about that tangy fruit when it meets a cloud of soft cream….

There are lots of variations on German fruit cakes, including adding meringue toppings or layers of vanilla custard.  In my German recipe book, meringue topping has the lovely name “Schneehaube” (literally, “snow bonnet”).  A quick vanilla custard can be made from powder which comes from a packet by Dr Oetker.  It’s called “Pudding” in German, which should be classified as a “false friend” for Brits who might be expecting treacle sponge when they hear that word.  I never expected Dr Oetker to catch on in the UK – the brand name sounds so medical.  But it’s made it all the way to the shelves of Waitrose.

British fruit cakes and puddings – a contrast to the German ones

It’s funny that we’ve never thought of baking fruit on top of a cake in the UK; by tradition we hide our cooked fruit inside pies or underneath crumbles.   British plum pudding (Christmas pud) is  fake!  It doesn’t contain any plums at all but is made with densely packed dried fruit.  The name comes from before Victorian times when, amazingly, “plum” used to mean “raisin”.  And that leaves me wondering what they used to say for “plum”.

We do have a couple of idioms about plums in English.  The “plum job” is a very easy, choice job, where you do little work for a lot of money.  It comes from the 17th century slang word “plum” meaning £1,000 – which was a huge sum of money in those days.  Also, if someone talks “with a plum in their mouth” it means they have an old-fashioned aristocratic accent.  In French, there’s the idiom “pour des prunes” – for nothing.  This saying is thought to have its origins in the 12th century.  Legend has it that some crusaders came back to France with nothing but cuttings from plum trees.  People laughed at them and said, “Ils sont allés là-bas pour des prunes!” – “They went there just for plums!”  They could do worse.

« Asterix in Britain: Rene Goscinny’s comic creations
A French market on your doorstep: “France At Home” in the UK »