French markets in the UK

For a short time, in a small space, you can be in the UK but pretend you’re in France.  You just need to visit one of these French markets coordinated and organized by Muriel Charles, the manager of the French company France At Home.  They’ve been running since 1994, and consist of around 15 French stallholders who come over to the UK between March and December every year and set up in various town centres.  You need to bookmark the calendar on the France At Home website as they only show one month of planned locations at a time.  They sell traditional French foods such as cheeses, meats, fresh bread, crêpes, pâtisserie, honey, vegetables and fruit.  They also sell other goods such as accessories, music, gifts and clothes.

The France At Home website gives information for town councils on how to book a visit from the French market, and on the facilities they need, such as a pedestrianized area, electricity supply, and rubbish disposal.  Stalls are strategically placed to avoid competition with existing shops selling similar goods.

Our visit to the Leatherhead French Market

My daughter and I didn’t arrive at the French Market in Leatherhead, Surrey, until around 3.30 pm.  As the market had opened at 8 am I wasn’t expecting to find much left, but in fact we were still able to buy some delicious French goodies.  And presumably we missed the early morning crowd: we were able to take our time, get a good look at everything and chat to the stallholders.   They were really friendly and informative and professional, and although they speak good English, they’re also quite happy to speak French with you if you want to.  So if you limit your range of vision to the stalls while you’re there, you could be in France.

We bought bread, forest honey, tomatoes and tarte tatin.  We couldn’t wait to dig in when we got home.  I can’t say much about the tarte tatin, because it disappeared while I was out later in the evening, due to a misunderstanding about who’d “already had some”.  That’s a good sign, I suppose.  The bread was just as you’d expect, straight out of a French bakery, the sort of thing you miss when you’re in the UK.

When it came to the honey, I chose “le miel forêt” because I love strong, coffee-coloured honey which tastes and smells of flowers and reminds me of a French summer.  Merci, les abeilles! 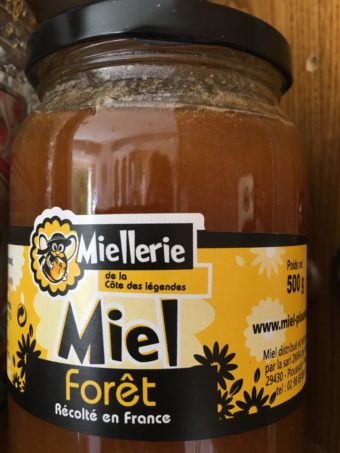 The stallholder let us taste the honey to make sure we’d make the right choices.  The selection was huge: 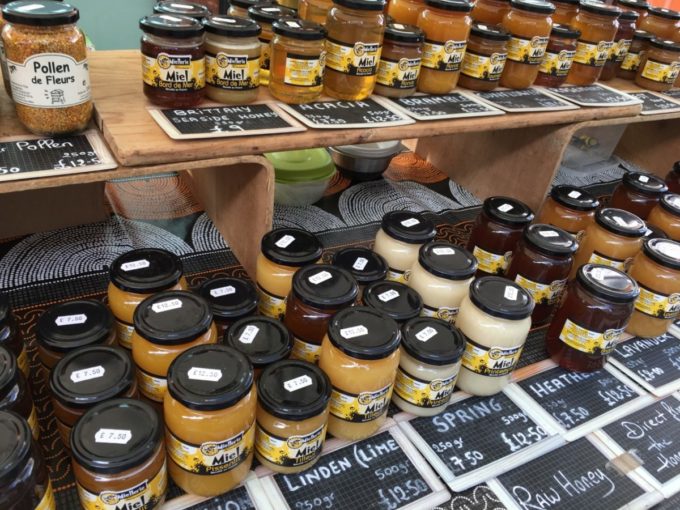 As “raw” honey hasn’t been pasteurized or filtered, the delicate flavour and aroma is preserved and it crystallizes quickly.  Unlike the tarte, I think the honey will last us quite some time because our supermarket honey comes in a squeezy bottle for those in a hurry at breakfast time.  Also, the intense flavour of the forest honey means you might eat less in one go.  Unless, of course, your name is Pooh.  In “Pooh goes Visiting”, one of my favourite stories in Winnie the Pooh, Pooh visits Rabbit, a politely reluctant host:

“…he was very glad to see Rabbit getting out the plates and mugs; and when Rabbit said, “Honey or condensed milk with your bread?” he was so excited that he said, “Both,” and then, so as not to seem greedy, he added, “But don’t bother about the bread, please.”

The tomatoes were the real “eye-opener” for me, as I didn’t realize there were so many different types.  Information about the tomato stallholders can be found at www.princedebretagne.com.  They sell organic vegetables and fruit from Brittany, and their website includes recipes and cookery hints.  The stallholder advised me to keep my tomatoes at room temperature, not in the ‘fridge, as they’re actually a fruit and cooling them spoils the flavour.  He even called after us when I forgot my leaflet of cooking hints.  All the tomatoes had a lovely rich, ripe colour: 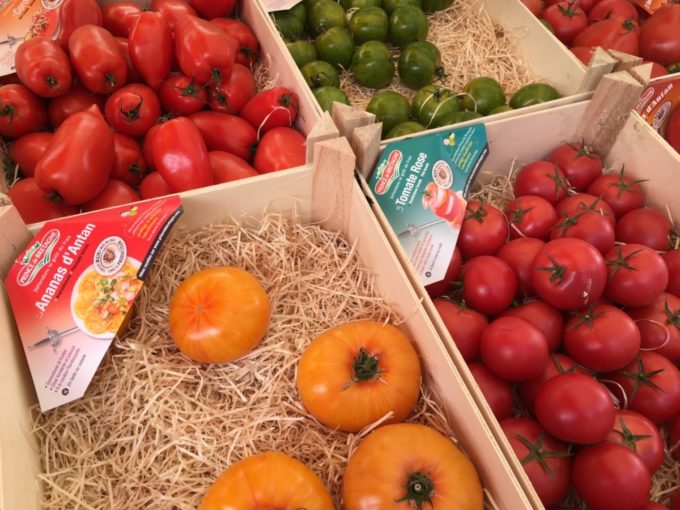 The leaflet he gave me illustrates the various shapes, colours, textures and flavours available, and how best to use and/or cook them.  It names the different types: 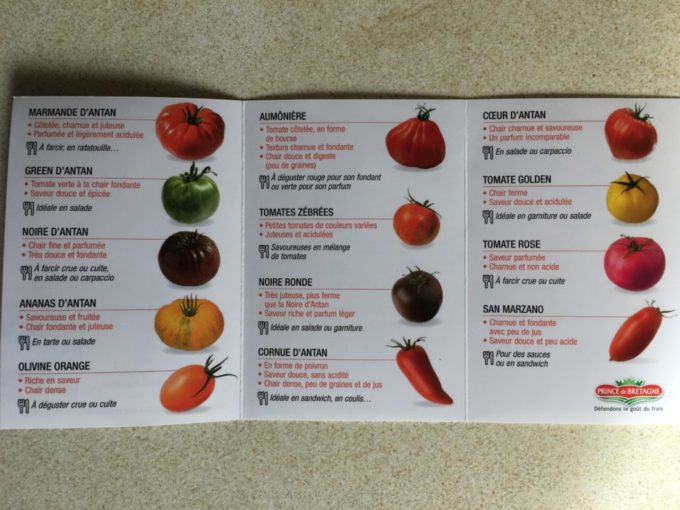 The best name, I think, is Tomate Zébrée: a zebra tomato!  I included a Noire d’Antan in my shopping bag, to get me over my innate suspicion of black tomatoes.

Some interesting tomato words are:

Once home, we ate some of the tomatoes raw and some roasted.  Miam/yum… 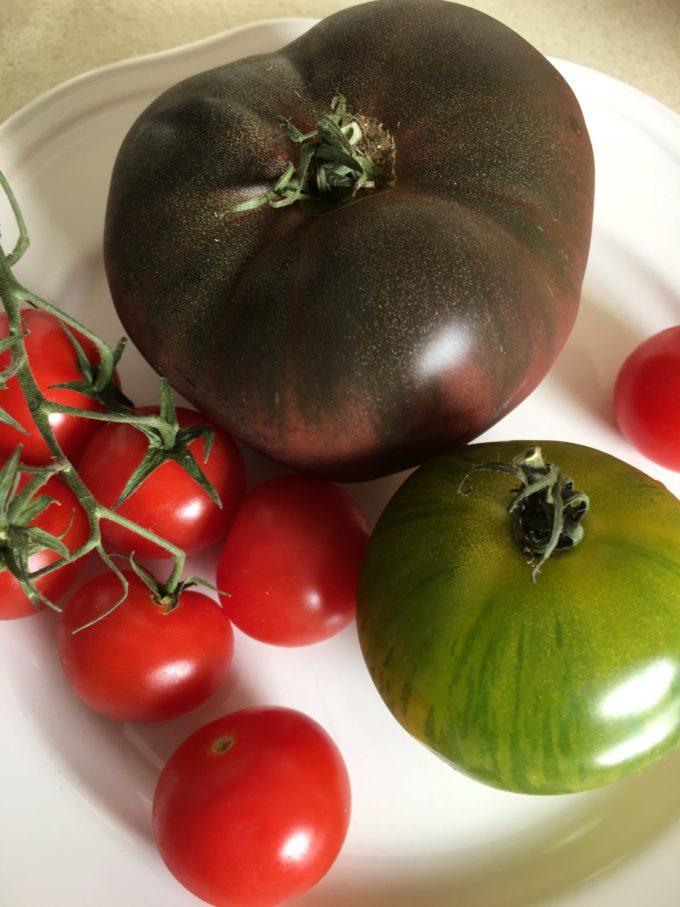 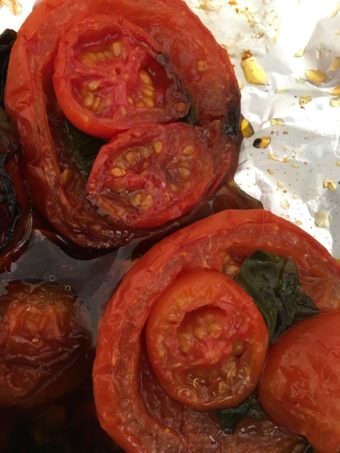 One colourful idea in the leaflet is “Millefeuille de Tomates” where you pile up slices of different coloured tomatoes, interspersed with slices of mozzarella and topped with basil leaves.  I can imagine enjoying this with some olive oil and French bread.  So this is something to plan for next time, which I hope will be soon. 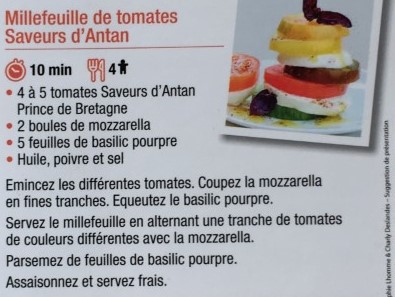