Literally, “Es zieht” means “It’s pulling.”  Air is being pulled from outside the building or vehicle and causing a draught. There are so many graphic words in German, especially the compound nouns.  Think of “Staubsauger” (vacuum cleaner; literally, dust sucker), or “Handschuhe” (gloves; literally, hand shoes).  They’re easy to learn.  Anyway, coming back to draughts – Brits don’t really notice them but Germans worry about them a lot.

“Mum’s on cold patrol!”  That’s me in winter, tutting and closing the door behind my daughter when she’s gone in to the (unheated) utility room or husband when he’s nipped out to top up the bird feed.  The person crossing from warm into cold is never aware of the icy blast they’re releasing behind them and I visualize the heating bill going up another notch as the boiler struggles to keep up.  We do have insulation in our house but we could probably do better.

I’ve read an article about the lack of insulation in many British houses:   www.theguardian.com/business/2018/apr/15/uk-government-inaction-citizens-advice-insulating.  Apparently many of our solid-wall houses need better insulation if we’re to meet emissions targets.  These houses are among the draughtiest in Europe.  Good insulation reduces heating bills too, but it takes a few years to pay for itself and so people don’t see the financial benefit straight away.

In the north of England, where I grew up, anyone who felt the cold was urged to toughen up.  They were “soft”.  There’s even a Yorkshire dialect word for feeling the cold: “nesh”.  It was mainly older people who had this attitude, and they were the ones who needed to keep warm.  I’ve heard that in Newcastle Upon Tyne, in freezing January, Friday night club-goers can be seen strolling along the streets in their t-shirts.

I grew up in a “character” Victorian house well above sea level in a Derbyshire village where the vicar zipped from granny to granny supping Harvey’s Bristol Cream.  Our unique, spacious house was so draughty that it wasn’t worth the expense of installing central heating upstairs. 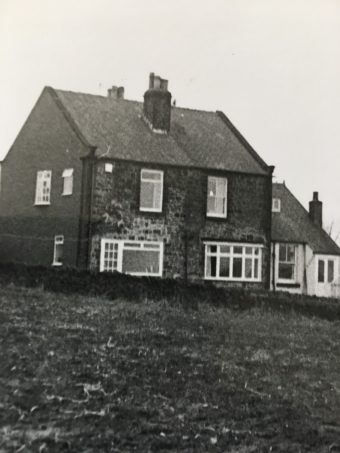 Intricate ice patterns formed on the inside of the windows in January; people who have double-glazing do miss out on these.  They’re beautiful and in German they’re called Eisblumen (ice flowers).  I used to keep a pair of “reading gloves” on my bedside table.  “Put another sweater on”, said my Dad if I complained of the cold.  The living room was the place to be, roasting in front of a roaring fire (I know, hygge).  The dog would be asleep as close to the hearth as she was allowed.  If someone left the room and closed the door too quickly the remaining occupants of the room shouted “Smoke!” as puffs of soot rose up to darken the black mark on the ceiling.  So nowadays, I want to be warm.

Warm German houses, and the German fear of draughts

When I was 17 and it was April I was excited to go on an “exchange” visit to Germany, where I was immersed in German for 3 weeks and came out more or less fluent, out of necessity.  My parents were happy for me to be visiting “friends of friends” on my own and I would have happily spent another 3 weeks there with my new friends.  An unexpected bonus was that they had heating upstairs.  If you opened a window, which nobody ever seemed to do, there was another window behind it!  This was an old house, but in Germany even old houses have been built to withstand a “continental” winter climate.  My German friends survived a visit to us one December: “Im Schlafzimmer kann man den Atem sehen!” In the bedroom you can see your breath.

I learned a new phrase, “es zieht”, there’s a draught.  Whenever he had some time off, the Dad of the family took us all out in the car to show me the area.  It was a whole new world to me; fascinating.  One time he opened the car window.  “Jane, wenn es zieht, musst du sagen.”  Tell me if you’re in a draught.  I wondered what the dangers were of being in a draught – perhaps a “stiff neck”.

A good few years later I was on holiday with my husband in Austria, BC (before child).  We were sitting in the sunny hotel conservatory eating breakfast.  A nearby window was open, letting in some fresh air – or a draught.  My husband was enjoying the fresh air, but the German lady on the table next to us thought it was a draught.  She closed the window without a word.  To her, the natural state of the window was closed.  To him, toughened up by a childhood in the northeast of England, its natural state was open.  So they had a disagreement and I can’t remember if the window ended up open or closed.  For Germans, it seems like draughts can be lethal.  Perhaps that’s why lots of them wear scarves indoors, even in summer.

Are UK houses getting warmer?

I think we in the UK are slowly catching up when it comes to insulating our houses.  In the rest of Europe everyone seems to accept that it will get cold in winter, and it might even snow, but here in Britain we hope for the best and get caught out when it snows.  Lots of Brits like “character” houses, which usually means old houses, Victorian at the very least, and of course it costs loads to heat them.  Old houses built in Britain were supposed to “breathe”, and you were meant to heat one room at a time.  A Spanish friend frowned at the thought of a house with “character”: “But I can go to a museum any time!”

Previous Post: « A French market on your doorstep: “France At Home” in the UK
Next Post: b small publishing: a review of their new “Hello Languages!” series »