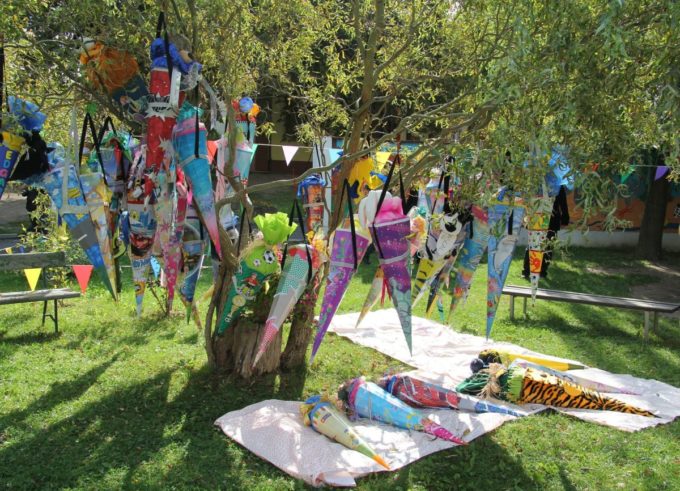 In Germany nobody’s afraid to turn the transition from Kindergarten to Grundschule (primary school) into a party!  I’ve never heard of that happening in any other country.  It’s a chance to celebrate a new phase in a child’s life, and Germans take parties seriously. The child’s status is changing to Schulkind, or school child.   Everyone knows that the first day is different and it only comes round once.   I haven’t experienced this event in Germany, so I’m writing about what I’ve read and been told, but it sounds fun.  It’s called “die Einschulung” (literally “schooling-in”, like “running-in”).  After 2 years in Kindergarten most 6 year-olds are ready for the Grundschule, but they’re assessed first to be sure.  That makes sense.

On holiday in Heidelberg one August, my daughter was hugely impressed to see large colourful Schultüten (“school cones”) on sale in shops everywhere, ready for the First Day at School.  They’re in the shape of gigantic ice cream cones, like this: 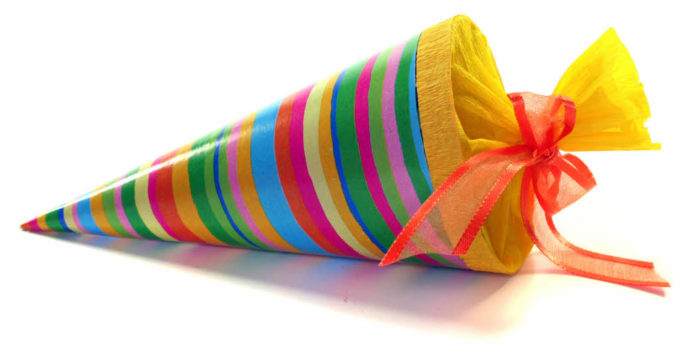 They all look different and they can be personalized for the child depending on the sort of things they like.  Some are bought and some are made, at home or in the Kindergarten, and they’re been tradition since the early 1800s.   German families fill the cones to the brim with chocolates, stationery and small toys, and the child proudly carries the cone to school. 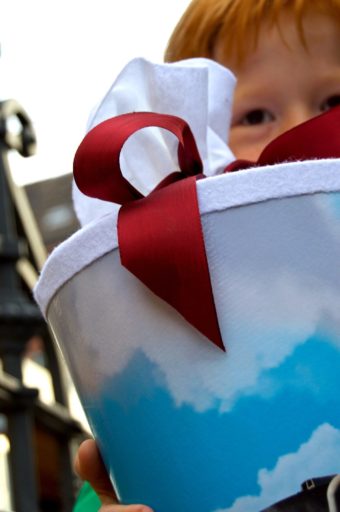 In Germany I’ve noticed lots of kids being taken to school on foot.  Often the grandparents or other family members go along on this first day too, and they might take the child out for a meal the day before.   When all the new kids and their families have arrived in the school, an older class puts on a special performance in the school hall to welcome them.  Then the newbies and their families go to their classroom together to meet their teacher.  After the teacher’s welcome, the relatives go to the hall for refreshments and come back to collect their children later.  The kids pose for the school photo and go home to empty the cone and do their first homework task ever.  It’s good that they wait until they get home to open the cone: they (maybe) learn the self-discipline of waiting for treats, and they can’t compare the contents of their cone with the other kids’ presents.

My daughter read “Conni kommt in die Schule”, by Liane Schneider in her first year at school and felt very envious of the German kids.  The book tells kids what to expect on their first day at school, and it debunks stereotypes of terrifying teachers in old films.  At the same time the book is realistic about some of the challenges in this new life, telling them about school bells and the crowds of children they’ll have to negotiate. It’s important not to oversell!

There’s a video on https://www.youtube.com/watch?v=B9hK9eCVUkY, of a German mum and teacher called Sally helping her daughter make her Schultüte at home.  We also see them in a shop choosing her Schulranzen, or schoolbag.  This seems to be taken very seriously – the bags look high quality and can be adjusted as the kids grow.  In another video Sally makes a truly spectacular Einschulungstorte – or First Day at School Cake: https://www.youtube.com/watch?v=xYHmuW4k6jM.

Here in the UK the first day at school is viewed with apprehension.  Kids start school at a younger age, some at just 4 years old, and that makes a big difference.  Our school day is also longer.  Netmums forums are full of anxious mums at the end of August.  I wish my daughter had had a Schultüte and a big welcome into school.  A British child would enjoy a school cone at home but they’d stand out if they walked to school with it!  You could still do other things though – the weather’s still good enough for ice cream in the park after school.

A familiar sight on the first day of term outside a UK primary school has always been a small child going into school in tears and the mother walking away from the school in tears.  There’s something about seeing your child “lining up” in the playground…. British kids used to spend 6 hours a day in “Big School” from the start, with all the British formalities of uniform, assembly and lining up for everything.  Many years ago when I started school, I spent part of my first day in Reception hiding under a table.  Parents weren’t allowed through the front door of the school.  Even nowadays the philosophy seems to be “We start as we mean to go on”.  On changing schools at age 8, about 6 years ago, my daughter spent an introductory afternoon with her new class.  She emerged chatting excitedly and telling me that she’d been given orange squash and a *biscuit.  The headteacher overheard and intervened firmly: “That’s only for today, you won’t be getting that normally”.  No parties there!

In the UK so much depends on the particular school, and on the class teacher.  There’s no traditional celebration for reaching this milestone, but a kind and creative teacher makes a huge difference.  They can make the first day fun for the kids so they’ll feel excited about the learning ahead of them.  And they’ll have happy memories of that day.  Nowadays, thank goodness, there’s more likely to be a “staggered” entry for the reception kids, with shorter days and smaller groups in the first few weeks.  Parents might bring their kids into school at first and the classroom might be set up like a nursery one to begin with.  We’ve become more aware of kids’ emotional needs.  First Day at School cards are on sale in the shops.  I’ve seen parents photographing their kids outside the school before they go in, making it into a fun occasion and probably sharing it among friends as they would other family events.   It seems that “schooling-in” is getting happier in the UK.  It would just be nice if we dared to have a proper celebration to mark the new way of life. 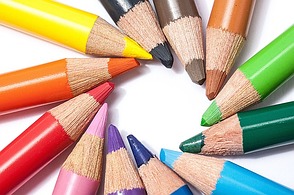 *“Healthy Eating”
Most UK schools proudly display a Healthy Eating award, a great idea but it’s a funny one, this.  The letter at the beginning of term informed us: “In accordance with our healthy eating policy, only fruit should be brought to school for the mid-morning snack”.  But then, at lunchtime, the school canteen served a choice of jam tart with custard or bubble-gum flavoured ice cream for dessert.
« “Dictionaries can be dangerous things”
Asterix in Britain: Rene Goscinny’s comic creations »