Trio is a Norwegian action and adventure series which has been a great success on Kika German television – and at our house.   It’s been dubbed (German “synchronisiert”) into German, so it’s available in Norwegian or German.  You’ll need a good understanding of German or Norwegian as there aren’t any subtitles.  The DVD cases state “ab 6 freigegeben” but I think Trio can be enjoyed by any age from about 9 to adult.  Three series have been made and each one has 10 episodes of 24 minutes.  Here’s the second series, the Cybergold adventure.  The series are also available on YouTube. 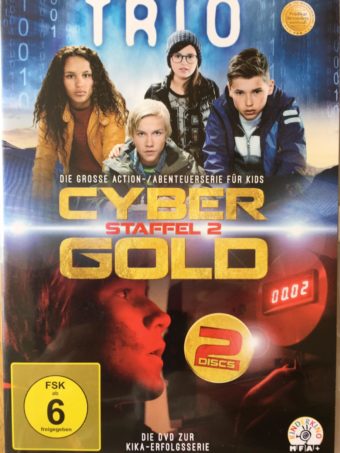 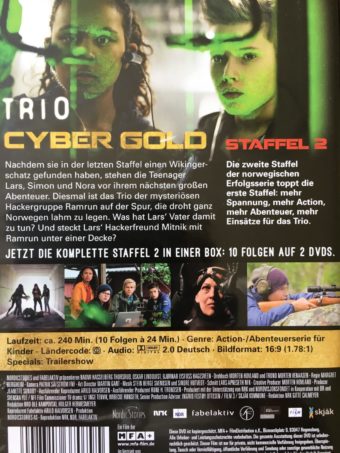 We’ve got a collection of DVDs in French and German, and from the point of view of language learning I find the series more useful than the long films.  With a series you get to know the characters better, and it’s easier to get the repetition you need.  You’re more likely to find the time to re-watch a favourite 24-minute episode than to search for the point where you left the action in a full-length film.

The “Trio” are 3 friends in their early teens who solve crimes together.  13 year-old Lars is the brains behind the investigations.  Following an accident, he has to use a wheelchair.  He’s the leader of the Trio, a computer expert, and he follows the other kids’ escapades on screen when he can’t take part himself.  Simen is his best friend, and Nora is the feisty girl motivated by her intolerance of any injustice.  All the kids are shown against a background of their family problems, so they seem more real and kids can identify more easily with them.

The first series, Odins Gold (Odinsgull in Norwegian) made in 2014, is about the Trio’s search for hidden treasure near their home village.  They have their hands full:  on their way to solving the crime they also have to deal with attacks on migrants via cyber-bullying, and cheating at a kids’ boxing camp.  All’s well that ends well, though, as they hand over 3 criminals to the police!

The second series is about a hacker called Ramrun who blackmails the government for a huge sum of money.  She (yes, a female criminal, “eine Hackerin”) threatens to bring the country to a standstill (German “lahmlegen”, literally to lay lame).  She shows she means business by triggering a nationwide power cut.  Her aim is to get hold of  vital data from the government – das Cybergold.  As usual, the Trio are kept busy with other adventures on their way to solving the crime.

The third series, die Kepler Diamanten (Keplerdiamantene) involves the attempted kidnapping of Nora in Hamburg.  There’s a romantic spark thrown in, between Nora and Simen.

The series can be enjoyed by adults too – providing a fun Familienfernsehabend!  The episodes are exciting without any need for murders, or violence or gory scenes.  As usual in kids’ adventure series, adults play a minor role and are sometimes annoying because they don’t believe what the kids say.

“I’m watching Cybergold episodes again at the moment.  I love the characters.  They have strong personalities you can look up to, for example Lars, a 13 year-old wheelchair user.  He doesn’t let the wheelchair hinder him in terms of his greatest talent: hacking and cracking codes.  The Norwegian setting is spectacular.  The highlight of this series has to be the plot.  It’s realistic but thrilling.  Lars and his friends Simen and Nora join forces with Lars’s internet friend Emma to solve a mystery about a hacking group posing a threat to the whole of Norway.  A plot twist reveals Lars’s dad being framed by the culprits!  I really enjoyed this series and would recommend it to anyone over 6 years old.”

It’s a shame this series isn’t available in English.  Some Scandinavian detective fiction has been translated into English, but it isn’t aimed at kids or teens.  More translations would raise awareness of the attractions of Scandinavia and boost tourism there.  I went cross-country skiing in Norway once, and I’ve been to its northernmost city, Tromso, to enjoy the midnight sun.  I’d love to experience more of its mountains and sea in the summer, and get to know the way of life.