Would you like to learn sign language?  If there’s no opportunity at school or in the family, most people don’t get an opportunity to learn it.   The reason to learn to sign is of course to communicate with D/deaf people.  But as a bonus, signing  can also help hearing people to express themselves more freely and clearly.

Here are the links to my other blog posts about signing:  there’s Sign Language and how to learn it, Sign Language: why did the chicken cross the road?  and Fingerspelling: how to sign the alphabet onto your hand.

It’s national Sign Language Week this week (March 2017).  British Sign Language is used by the UK deaf community of around 151,000 people and hopefully this special week will raise public awareness of BSL.  The UK government has officially recognized it as a language, but hasn’t yet given it full legal status so it still doesn’t have the same kudos as a spoken language.  Just like spoken languages, basic BSL can easily be taught at primary school and at secondary level it could even be offered as a GCSE subject.

Facial expression and body language are a vital part of BSL

Here’s the BSL sign for “friend(s)” – the meaning is clear, but something vital is missing: the face! 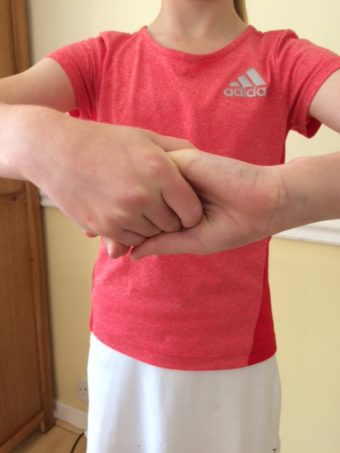 Without the right facial expression and body language, a deaf person won’t understand you.  At BSL classes you learn that facial expressions are part of the signs, so for example you can’t sign “happy” with a blank face.   I remember feeling self-conscious about this in my first signing lesson, so my signs were very small and my face very tense!  As you progress on a BSL course, you get more confident about using facial expression and body language.  Among older hearing people it’s sometimes considered rude to be very expressive, especially perhaps if they’re British.  They think it looks odd because they’re not used to it.  But if you watch people signing fluently it looks graceful and dynamic.

Young children are naturally expressive and uninhibited, so they can have a lot of fun with sign language straight away.

You can watch signing on the BBC programme “See Hear” or on any sign language interpreted programme.  Children’s programmes are fun to watch with sign interpretation – and easier to understand.  On the internet there’s the lovely http://www.signedstories.com.  And for the little ones there’s always “Something Special”on CBeebies, with Mr Tumble.  Some guided tours of museums and galleries are simultaneously interpreted into BSL.  If you want to learn to sign, basic BSL courses are available online, but learning face-to-face with a deaf instructor is more fun and more effective.  You might be able to find an evening class in your area.

A video by the journalist Hannah Gelbart appeared on the BBC website last week, http://www.bbc.co.uk/news/education-39274661 : “Should children learn sign language?”  She filmed some deaf children teaching hearing children from a nearby school to sign, and her film also appeared on CBBC today: http://www.bbc.co.uk/newsround/39346960. It showed you the kids helping each other and making new friends.  The deaf children said it made them feel “happy and confident” to play with hearing children who could use basic sign language, and they obviously loved teaching it.  The hearing children will go on to be able to communicate with other deaf people as well; it’s a skill for life.  The hearing children said that signing was fun, they enjoyed having a “secret language” and it came in useful when they were somewhere noisy.

I used to sign all day when I was teaching primary deaf children.  We invited some local hearing children to play, and they invited our children to their school.  All the children learned a lot about communication.  I went on to teach in a secondary school where most of the students were hearing, and some had varying degrees of hearing impairment.  We ran an after-school “signing club” and everybody was invited.

There’s been an online petition asking for BSL to be taught in schools.  The government replied that there’s no time on the curriculum, but schools are still free to teach it if they want.  It’s easy for primary children to learn basic sign – you don’t need many sessions to learn the finger alphabet and a few signs.  Animal signs are particularly fun for young children to learn.

The signs for emotions are particularly useful for “emotional literacy”.  Kids can practise a whole range of facial expressions to fit the different emotions.  I think there’s a link between being able to sign and having an aptitude for drama.  And the signs can be used to teach the kids foreign languages.  I worked as a primary supply teacher for a few months, and sometimes only had one day with each class.  I had a sign language lesson ready so that if we had time they could learn some signing and I could offer them something new.  For teachers who’d like to introduce some sign, this website provides some useful materials: “Let’s Sign”: http://www.deafbooks.co.uk.

I did “baby signing” with my daughter, which involves using a few basic signs from BSL to help babies communicate while they’re learning to talk.  She soon dropped the signs when she didn’t need them anymore, but we kept some of them going and she can still finger spell and use a few signs.  This can be useful when you’re on opposite sides of the swimming pool and you need to communicate!  Or when she’s trying to do aerial cartwheels in the garden and wants me to watch through the window.  Even if your signing gets “rusty”, I think the benefits linger.  It still helps kids and adults to express themselves, and most importantly to communicate with deaf people.