Just for a change, I’ve been traveling in time for this post!

How I was given a family travel journal from 1912

When I started studying French and German at university my Grandmother unexpectedly gave me a leather-bound travel journal written in 1912 by her German grandfather, Johann.  Until then I had no idea that part of my family originated from the kingdom of Württemberg, now in the state of Baden-Württemberg.  My Grandmother was born in 1902 and she had apparently always felt awkward about her German family because she’d lived through the two world wars.  My great-great grandparents emigrated from Eberbach, in Württemberg to booming industrial Sheffield in 1869 when they were aged about 20. They came from a poor rural area but both sets of parents were farmers so they knew how to turn pigs into sausages for the local Sheffield steelworkers.  They worked for a German pork butcher, then set up a family business (they had 13 children) which thrived for over 100 years.

I was probably the first person to read the journal all the way through.  It describes part of a trip Johann made back to Germany to visit his relatives when he was 63.  It seems that he took at least one family member with him each time he went back.  This time he was with his daughter Anne, his brother Friedrich, who had established himself as a pork butcher in Rotherham, and Friedrich’s daughters Lena and Rosie.

My Great-Great Grandfather’s journey in 1912

Johann travelled to Germany by steamer boat and steam train.   He starts writing his journal in Dusseldorf, then visits Wiesbaden and Frankfurt before going on to Heidelberg.  From Heidelberg his journey takes him to nearby Mergentheim, Langenburg and Eberbach, Berndshofen and Kuenzelsau, then he starts his journey home by boat from Mainz. 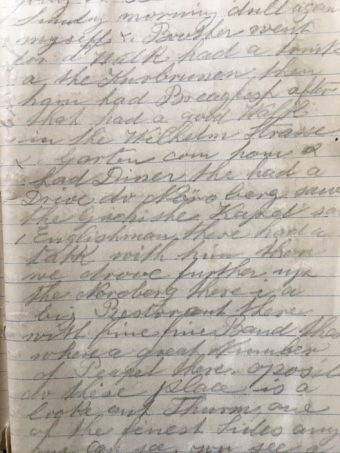 Here’s a page from the 16-page journal.  It describes one day of the family’s trip to Wiesbaden.  You can see why it took me ages to decipher the writing, which is in English with some German mixed in.  It’s in pencil because Johann’s only alternative would have been a dip-in fountain pen; not practical for travelling.  The spiky old German script he uses, called “Kurrentschrift” was taught in Germany from the 19th Century into the 20th Century.  Johann had the good fortune to have learned to read and write in German as a child; education had been compulsory in Wuerttemberg since the 17th Century.  It wasn’t compulsory in Britain until 1875.  I assume he learned English as he went along, once he got to Sheffield.

The spelling is eccentric and some words are written as they are pronounced in Sheffield, eg. “mortar” means motor car. In those days people called these innovative vehicles “motors” for short, not “cars” yet.  It was early days – one of the first cars available to buy was the Ford Model T, produced in 1908.

We make a similar journey in 2016, and see the differences

Last summer my husband, my daughter and I spent a few days in Heidelberg.  It was interesting to compare our trip with that of Johann 104 years ago.  I was reminded of the travel documentary series “Great Continental Railway Journeys” on BBC2, where Michael Portillo uses Bradshaw’s Continental Railway Guide 1913 to plan train journeys.  He visits places of interest picked out in the guide and makes comparisons with the modern world.  I’ve done this here, on a much smaller scale, by comparing our experiences with Johann’s.

I’ve corrected the spelling in this short excerpt from the diary to make it easier to understand.

Left Frankfurt 5.12, arrived Heidelberg 6.36.  Went through very pretty country.  Got lodgings at the Reichspost Hotel.  Had supper, cost 11M90 with 3 glasses of beer and a small bottle of wine for Anne and Rosie.  Lena had coffee and everything is awfully dear here.  After supper we went to the Stadtgarten.  Our girls were not dressed as nicely as they are here, they are dressed equal if not superior to England.

For our trip in 2016, we flew from Heathrow to Frankfurt.  The rail journey from Frankfurt Airport took 50 minutes, changing at Mannheim.  So the rail journey is a lot quicker nowadays, as you’d expect. By steam train in 1912 it took 40 minutes longer.   I can’t say we went through “pretty countryside”; a few industrial estates have sprung up since 1912.

The Reichspost Hotel used to stand on a corner of the Bismarkplatz but it’s no longer there and we couldn’t work out where it would have been.  Heidelberg escaped bombing in the Second World War so the hotel must have been demolished at some point to make way for new buildings.  Here’s a postcard showing the hotel in 1912. 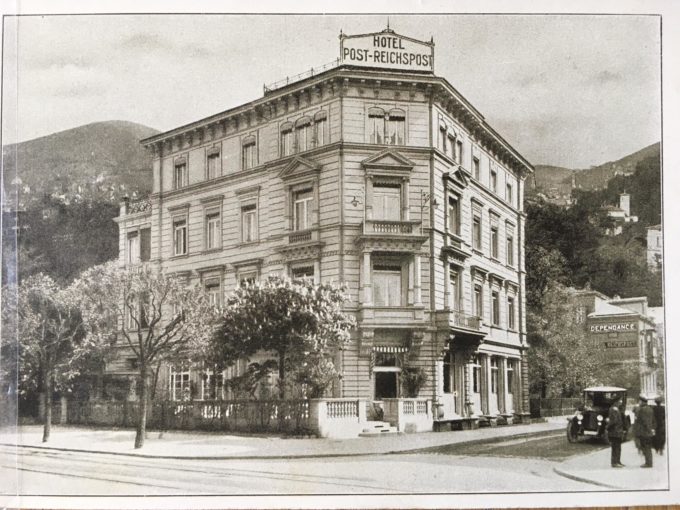 On the back of the postcard we read that the telephone number was 150 or 151 and that there was running hot and cold water in some of the rooms.  So at least 151 people in the town had a telephone in 1912.  The family didn’t have to book ahead – they “got lodgings”.  No need for Tripadvisor.

As for how “nicely” people were dressed, despite the warm weather most people we saw were wearing jeans, even more than you’d see in the UK.  In H & M clothes shop on the Bismarkplatz we noticed that the clothes were better quality than H & M at home and there weren’t so many t-shirts with slogans.  Of course, in 1912 the men and women would have been dressed more formally, the women in quite long dresses.

As can be seen by the postcard there were very few cars (“mortars”) and you’d have to get about town by electric tram, or by horses and carriage – the 1912 equivalent of a taxi.  This is what Johann means when he writes about a “drive”:

Had a drive over the Neckar Bridge to Neuenheim, up the hill between the vineyards and down over the stone bridge, past the university protestant church, up the hill to the Schloss.  Paid for the drive 8 shillings, then discharged the driver and went up to the Schloss.  Paid 1 Mark each to see everything there was to be seen.  The girls went up the steps to the top of the barrel.  The large one holds 22 000 litres.  It has been filled for one of the feasts.  Then had a look at the Scheffel Monument.  Had dinner at the Schloss restaurant, 2M50 without any drink, then down again.

Left Heidelberg at 4 pm for Mergentheim, fare for one 3.40.  Bought at the Schloss: 1 picture 11M50, 1 pipe  1M50, and sending the goods 2M50 or 1M25 each.  Came straight to the station and took the train to Mergentheim.  All very pleased to see us, especially little Flory…

The “drive” they did was the same as the circular walk we did from the town, over the Neckar Bridge, along the Philosophenweg and over the stone bridge back into the town.  We used the funicular railway to get up to the Schloss, but they couldn’t use that as it was not built until 1916, four years later.  Like Lena, Rosie and Anne, we went up the steps to the top of the wine barrel.  Outside the castle we went out to stand on the Scheffel terrace dedicated to the 19th century poet.  This is a painting of the view the family would have seen from the terrace.  It’s from a 1912 postcard. 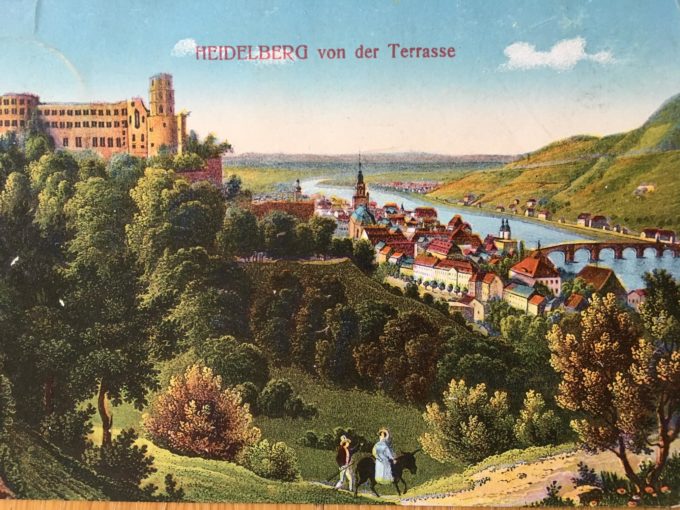 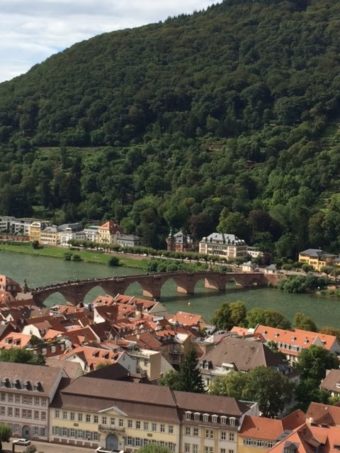 In the castle shop we could have bought any number of pictures of the Schloss, but certainly not a pipe, and we wouldn’t have been able to have the things sent home for us.  The postal service in 1912 must have been amazing!

Johann and his brother took a carriage and a pair of horses for their drive to their birthplace, Eberbach, and picked up their brother-in-law Mr Weckert on the way.  In those days the roads would have been very dirty (all those horses!) so you had to watch where you were going.  Not so poor Mr Weckert:

While me and Uncle received our sister and their daughter, Mr Weckert got off the seat with the driver, missed the step and went all his length in the muck.  He was up again before we saw him.  All had a good laugh.  (Presumably he would have been covered in mud and horse poo).

Funny to think that in those days there were radio transmissions but no radio programmes, no TV, hardly any cars or air travel, and no internet or computers of any kind.  Hardly anyone had a telephone (what we now call a landline), so there were several postal deliveries every day and that was how people kept in touch with each other.  I wonder how Johann and his family would have reacted if they’d seen a laptop or a smartphone, or a rail ticket issued by computer.

Do you keep a travel journal, and who is it meant for?  Most travel bloggers wait until they get home to write a full blog post.  When on holiday I make a few notes each day about what we’ve done and any funny/interesting things that have happened or been said.  Then we can look back together and remember.  Paper might preserve memories for longer than something recorded online.  Johann refers to his brother as “Uncle” so it seems that he kept the travel journal for his children and grandchildren back home in Sheffield.  The “little Flory” he refers to was his youngest daughter who must have been already there, staying with relatives. I don’t suppose Johann thought his family would be reading his journal 105 years hence.  I’ve heard the saying “Keep a diary and one day it will keep you” but it might also keep your descendants!