The Parc Animalier is one of the top wildlife parks in France, and we were fortunate to have a sunny day trip there with our friend Jacqueline during our visit to Pau in October half term 2016.  It’s in the foothills of the Pyrenees, about 10 minutes’ drive south from Lourdes, at a village called Argelès-Gazost (I wonder if this is a Basque name).  Its slogan is “A chacun sa nature”, a play on the popular saying “A chacun son goût”, each to his own (taste).  It means “each to his own nature”: the animals are kept in an environment which suits each one of them rather than us.  Most of the animals are typical of the Pyrenean wildlife and they’re encouraged to breed in the park.

The wildlife park is home to about 100 different species, and they’re accommodated on a steep tree-covered slope, the side of one of the foothills.  As we approached the entrance from the car park I wondered how the park could be that big, as nothing is visible when you look at the hill.  The answer is that they’ve made clever use of the mountain contours.  The footpath winds up the side of the hill with areas on either side for the animal enclosures.  The “petit parcours” is the lower route, accessible to wheelchairs, prams and people with disabilities.  The “grand parcours” is a steep path adjoining it, which takes you up to the top of the hill.  This part of the route is more “sportif” and if you have a pram you’ll have to abandon it and carry the child – good idea to take a baby carrier for this.  You’ll need to allow two or three hours for your visit.  The park is open from the beginning of April to the end of October.

After you’ve paid your entrance fee (well worth it) of 18 Euros for an adult, 13 Euros for a child aged 3-11, you walk past some ponds with lovely water birds; a relaxing start.  The whole park was quite peaceful when we were there and it probably gets a lot more crowded in summer.  If visiting in summer you’d definitely need your sun protection and drinks as it gets quite hot.  Even more relaxing than the water birds were the otters – it’s something about their graceful swimming, I could watch them for ages.  As for the marmots, they were so relaxed that they were asleep in a heap.  I think we saw them just before they went into hibernation.  In German I’ve heard the phrase “wie ein Murmeltier schlafen”, to sleep like a marmot.  If you go before they start winding down for the winter you get to cuddle them!  The next enclosure made up for this slight let-down: we spotted a majestic lynx with perfect balance, sleeping high up in a tree.

The route led us through the “musée”, a building containing a collection of stuffed African animals.  They were well displayed but a bit unexpected, as the rest of the park is mainly for animals from the Pyrenees.  Anyway, it was interesting to appreciate the full size of these animals from close quarters, which you can’t usually do when they’re alive.

For me, the brown bears (les ours) were a highlight: one of them swimming in the pool complete with waterfall, one of them catching grapes thrown by a friendly warden.  Just look at the size of its feet… 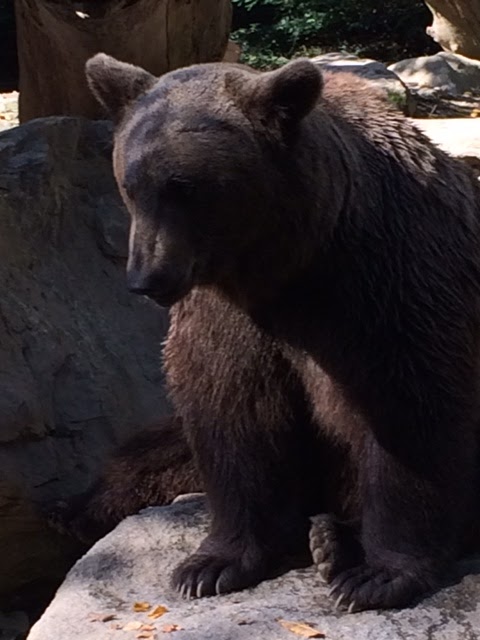 We were surprised to see vultures (les vautours) in another area.  Then we read on a notice that these birds had been badly injured by flying into wind turbines.  They had received emergency treatment before being given a home here. 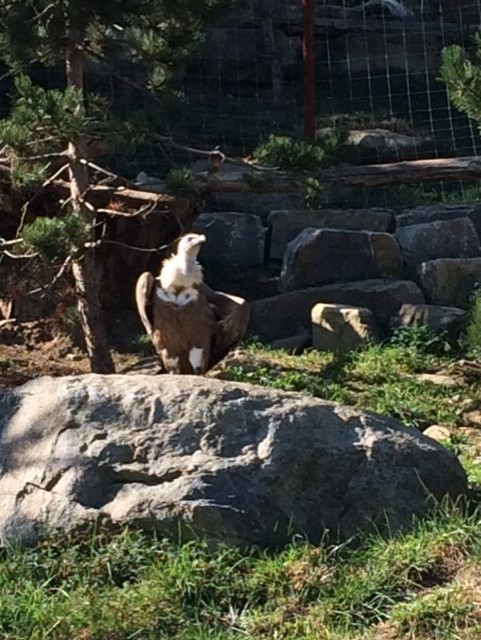 From the photo below you can see the wolves (les loups) blending into their background, standing in a line as the warden throws them huge chunks of meat.  My daughter was struck by the leader of the pack: “a big one with blue eyes”. 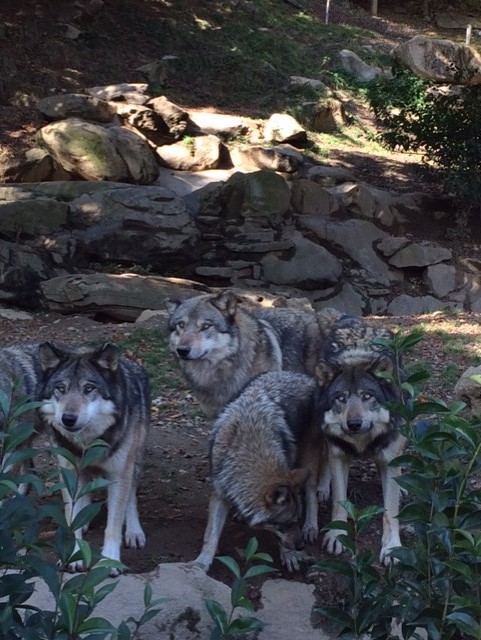 The “grand parcours” led us to the summit of the hill where there were deer and mountain goats.  One tiny deer just outside the wolves’ enclosure was sitting with its own supply of water and food, and was happy to be stroked by my daughter.  Along with other parents and children we climbed into the goats’ pen with the baby ones, stroked them and fed them with the food provided.  There is a picnic area alongside, quite full of families on the day of our visit but with a very calm atmosphere.  One family had even laid out their own tablecloth!  There is plenty of space for kids to run around, and everyone can enjoy the spectacular views. 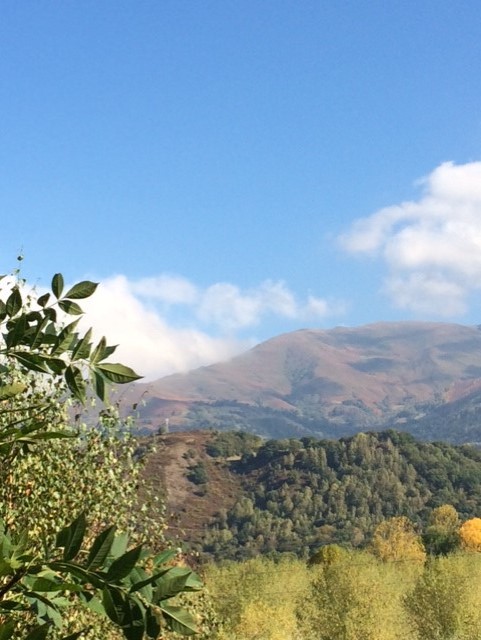 A surprise discovery on the route back down the hill was the “sentier nature” or nature path, with a bee hive (une ruche) and a row of different types of mushrooms growing alongside the path.  This one is called “pied de mouton” or sheep’s foot, but in English it’s called a hedgehog mushroom! 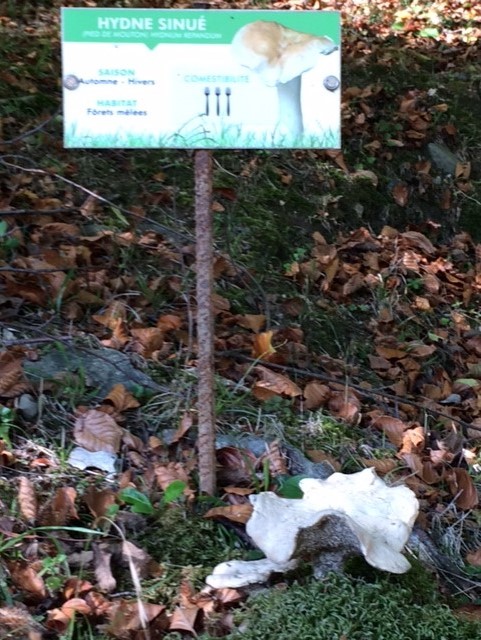 The park was clean and the animals seemed well looked after.  In some zoos I’ve found myself constantly saying “I wonder what that is” but here there was enough information provided without it being overwhelming.  It’s often the case with animal parks that the more freedom the animals have, the more difficult it is for us humans to actually spot them, which is fair enough.  In this Parc Animalier they’ve managed to achieve closeness without cages.

At the entrance/exit to the park there’s a café, a snack bar and a large shop where you’re bound to find a suitable souvenir for any age, including toys and clothes.  It was still quite warm so we sat outside with our ice creams before heading home with our wolf fridge magnet and lots of animal memories.