When I was writing my blog post about Biarritz last month, I was reminded of spending happy months in that area of southwest France as a student.  I was fascinated by the culture of the “Pays Basque” or Basque country, a beautiful area which lies to the north and south of the Pyrenees, stradddling both France and Spain. 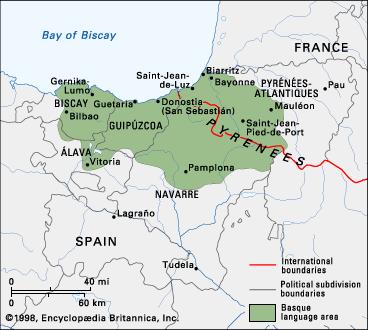 As I mentioned in the Biarritz post, the houses are white, with traditional Basque red shutters and roofs.  I’ve even seen the same colour in table linen you can buy there and I haven’t seen that shade of red anywhere else.  Here it is in the village of Sare, about 14 km inland from Biarritz: 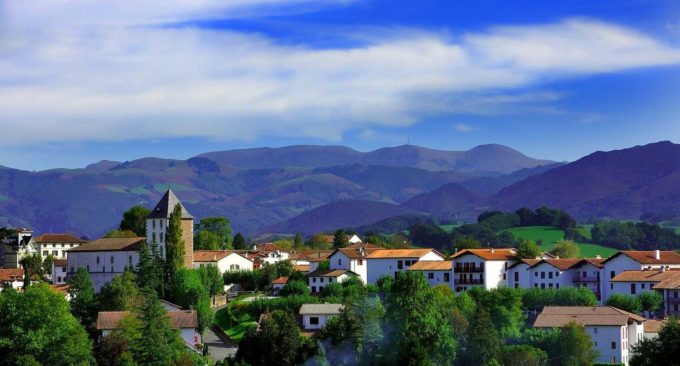 About 7% of the French Basque population speak Basque and there’s a strong culture of music, sport (such as the ball game pelota) festivals and food.  The villages look as though they haven’t changed in centuries.  The traditional cuisine of the area includes local fish, ham (Jambon de Bayonne) and a rich, almond-flavoured cake, the Gateau Basque (I know, cake seems to feature in most of my blog posts).  One of my friends at the university in Pau was called Maïté, a Basque name meaning “beloved”.  She told me that the origins of the language were a mystery and that her family spoke Basque as well as French.

At this point I can’t resist looking for some up-to-date information about the origins of the Basque people and their language.  I wonder if there are any new theories about where the language came from.  Well, it seems that researchers have still found no link between the Basque language, Euskera (pronounced e-ooskara) and any other language in the world.   Unlike all other western European languages it’s not an “Indo-European” language.  It originated in an early form in the Stone Age and remained isolated and unaffected by waves of migration by the Indo-European tribes about 6,000 years ago.  These people were “warrior pastoralists”, travelling farmers who overwhelmed the farmers of Neolithic (Stone Age) Europe, then conquered parts of Asia as well.  Studying history of language at university I was puzzled by how they could have been so effective – until I read that the migrations coincided with the taming of the horse.  On horseback they would have been in a stronger position to invade small communities and cover large areas of land.  Various Indo-European groups and cultures started to develop all over Europe and Asia.  Most of the pre-existing languages were erased, but we know Basque was an exception.  It’s a truly ancient language.

Much later in history, 2,000 years ago, Basque was still spoken North and South of the Pyrenees, at that time all the way from the Bay of Biscay in the west to the Mediterranean in the east.  France (Gaul, as it was then) was invaded by the Romans but they neglected the area around the Pyrenees and so the Basques were surrounded by, but never overcome by, yet another language – Latin.  The Romance languages French and Spanish developed from Latin; like Celtic and Germanic and other language “families” they are descended from the Indo-European language.

There are some written records of Basque from this time.  Latin inscriptions from the Roman period in southwest France record a few proper names which are obviously Basque.  From the year 1000 onwards proper nouns and even phrases and sentences in Basque become more and more numerous in writings discovered locally.  The first Basque book in 1545 marked the beginning of a writing tradition which didn’t really expand until the 19th century.  The influence of surrounding languages on Basque is shown in some loan words from French, Spanish and Latin, such as “bake” (peace) from Latin “pax, pace” and “errege” (king) from Latin “rex, regis”.

There are several dialects – Euskara is the standardized version.  The basic word order of a sentence in English and French is subject-verb-object, so “The dog chased the cat”.  In Basque it’s subject-object-verb, so “The dog the cat chased”.  The grammar is very complex; for comparison, German has four cases, Basque has eight.  Each noun takes one of eight different endings depending on the role it plays in the sentence.  As one example, the suffix -a is added to the noun to mean “the”, and -k is added if the noun is the subject (ergative or nominative case) in the sentence.  So “oin” is foot and “oinak” means “the foot” when it’s the subject of the sentence.  Here are two example sentences:

These common words show how different Basque is from any other languages we know:

I’ve read that Finnish is another pre-Indo-European language and that it was probably spoken by people living in the Ural Mountains in western Russia, who migrated westwards.  All languages change so gradually throughout history that we can’t pinpoint, for instance, at which point one of the branches of Indo-European became Latin.  All languages are developing and changing all the time, over thousands of years.  Perhaps we should say that all languages are equally old because they date back to when humans first started to speak!