At October half-term we spent some happy days with our friend Jacqueline in the town of Pau, southwest France, a lovely area worthy of a lot of blogposts.  It’s a cold and murky day in London so I’ve decided to start with a post about our sunny day in the seaside resort of Biarritz.  There aren’t any direct flights from the UK to Pau out of season, so we flew to nearby Biarritz with Ryanair, convenient afternoon flights which take about 2 hours. The airport is about 3 kilometres from the town centre.  Before our flight back to Stansted we spent a few relaxing hours exploring the sea front at Biarritz, which has no fewer than 6 beaches. 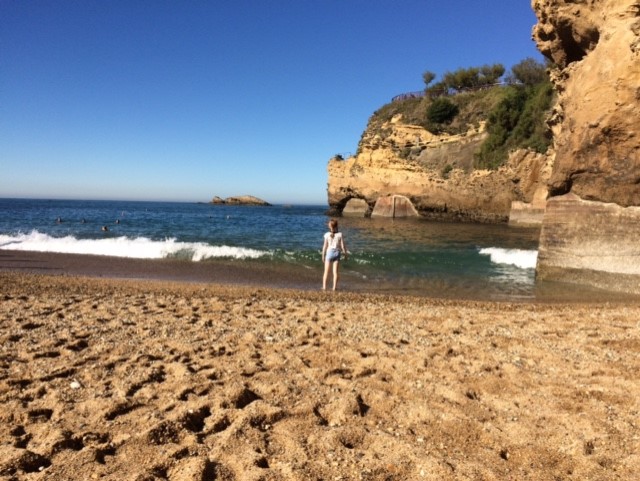 Biarritz is on the Atlantic coast, 35 km from the Spanish border.  I used to wonder why its name doesn’t sound French.  It’s actually a Basque name, as it is part of French Basque country, which extends down into Spain.  On our wanderings we heard French, Spanish and Basque around us.  About 7% of the French Basque population speak Basque and signposts give directions in both languages.  At this point I can’t resist looking up some information about the origin of the Basque people and their language.  The language, Euskera, is not related to any other language in the world, which intrigues me so I’ve decided to find out about it and write about it in the next blogpost.

I spent 4 months in this area as a student and the first thing I noticed then was that despite the warm April weather the locals thought it was cold and were wearing their coats.  The second thing was the traditional Basque white houses with the roofs in that unique Basque red and the lush green setting, in contrast to the Riviera.  The reason for the greener environment is more rain, but I don’t mind that with these temperatures.  This was the third time we’d been there in October half term and each time it’s been like an extension to the UK summer, about 22 degrees when it’s sunny.  Apparently there can be mild days in winter too.  You can eat outside all year round and one family told me they’d been paddling in the sea at Christmas.

Sea bathing became popular in Biarritz in the 19th century.  The writer Victor Hugo wrote that he loved the place, but feared it might become popular.  With this mild climate and the beautiful setting he was right to be concerned.  It became a summer retreat for European royals in the mid-19th century when Napoleon III built a dazzling palace on the seafront for his wife Empress Eugenie.  Since 1883 it’s been a luxury hotel, the Hôtel du Palais, now 5-star with spa facilities.  The address fits the splendour:  no 1 avenue de l’Impératrice.  Some street names, like “avenue de la reine Victoria” and “avenue Edouard VII” reveal the subsequent royal following, and plenty of well-heeled Europeans have kept up the trend ever since.  It’s still a smart holiday spot with elegant promenades and buildings typical of the Basque, neoclassical, art deco and art nouveau styles as well as some more bland modern ones.  According to the Tourist Office website, the town “offers us the tonic blast of a region of unselfconscious luxury”. 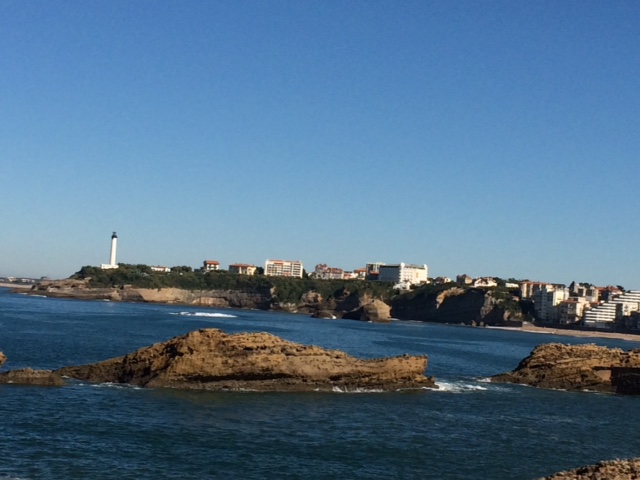 The beaches are beautiful, with clean golden sand and huge rocks for the sea to crash against.  The Plage de la Côte des Basques is the famous surfing beach with dramatic waves and athletic figures in wet suits.  Biarritz is the French capital of surfing and a competition was being held in the rolling waves on the day we were there.  I once had a go at this sport on Croyde beach in Devon, a much cooler climate than Biarritz but the same principle involving perseverance, great core muscles and amazing balance.  After 3 hours’ tuition and of course a lot of time spent underneath the surf board I called it a day.  It takes a lot of practice to be able to stand up and I figured that for the effort involved I’d rather stick to the easier “bodyboarding”, the thrill of catching the wave without the shock of falling under it.   For those who do get the hang of surfing, it becomes an exhilarating passion they can indulge all year round.  Some of the surfers we saw at Biarritz had driven a long way: we saw a group who had driven from Germany.  According to the Tourist Office, Biarritz “surfs on a wave of effervescent youth”.

We walked along the seafront admiring the lovely views.  This last weekend of the UK school half term break was also part of the French school “Toussaint” holiday and it was busy without being overcrowded, a relaxed, holiday atmosphere with everyone enjoying the sunshine.   It’s worth crossing the footbridge to the “Rocher de la Vierge”, a rocky outcrop with a statue of the Virgin Mary. 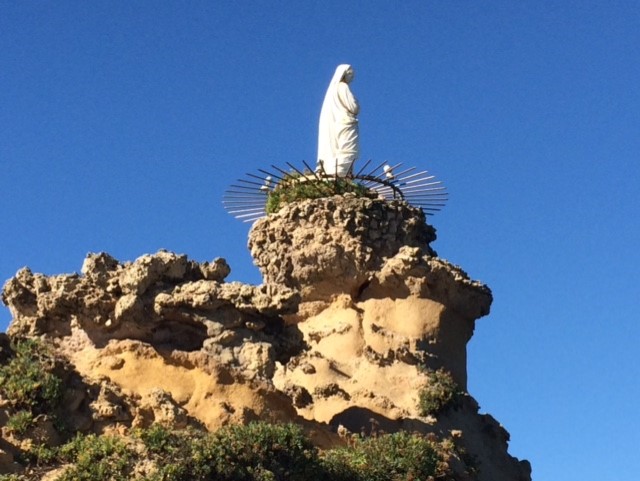 It was built in memory of a boat wrecked in the 19th century and offers really sweeping views of the Bay of Biscay. 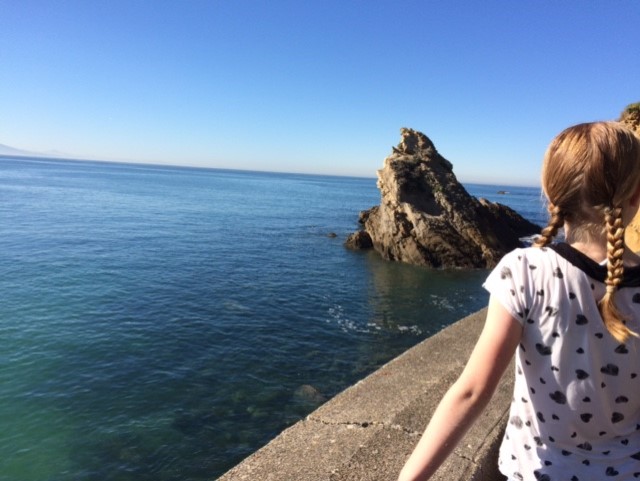 At another spot we saw some people playing the Basque ball game of “pelote”, which involves hitting a ball against a wall.  I’d never seen a racket that shape before – it looked like a long, curved basket.

Last time we came, 3 years ago we visited the amazing “Musée de la Mer”, now renovated and renamed “Aquarium de Biarritz”.  It’s now said to be even better, but we couldn’t fit that in with the time we had available.  We were quite happy with what we managed.

As for the shops and restaurants, there’s quite a contrast between the upmarket boutiques and eateries and the surf shops, but everything looks smart.  We were particularly drawn to the “chocolate shops” with their lavish window displays.  We bought some yummy sandwiches from one of these shops, to eat on the beach after our walk and paddle in the (not cold) sea.  Some people were swimming in the sea, without wetsuits.  There was no time to walk up into the town and try the “hot chocolate to die for” Jacqueline had told us about – my daughter and I had had several hot-chocolate-tastings in shops and cafés in Pau so we had built up a bit of a reputation.  Instead, we bought a chocolatey-custardy cake for the journey home to London, to a temperature drop of about 10 degrees.  However much I like the idea of #cosywinter, I love the sea air and I’d rather be on the Biarritz seafront any (sunny) autumn day than doing “hygge”.

« Fingerspelling: how to sign the alphabet onto your hand
The Basque Language »