Finger spelling does look difficult.  You might have seen a sign interpreter on TV fingerspelling a place name, and been amazed at the speed of it and daunted at the thought of trying to learn it.  But it’s easier than you think.  Here are some “stills” of finger spelling, seen from the speller’s point of view:

If you look at the pictures above, can you see how the handshapes for British Sign Language fingerspelling look like the written letters?  It doesn’t take long to learn the “manual alphabet”, but it takes practice to get some speed up and be able to “read” other people’s fingerspelling.   I’ve always found that hearing kids enjoy learning the manual alphabet – they find it fun and look at it as a sort of code as well as a way of communicating with someone who’s deaf.  Of course it would be difficult to have a full conversation using fingerspelling only, but at least you can communicate some words this way.

As I explained in my first blog post about sign languages, BSL is a language in its own right and has its own grammatical structure.  I explain more about this structure  in my post Sign Language: why did the chicken cross the road?  Hearing people often express surprise that sign language is not the same all over the world.  Just like spoken languages, sign languages arose out of necessity in each community – they were never some kind of international project.  Deaf people needed to communicate with each other and so they found a way.  All sign languages have a fingerspelling system to use as an “add-on” for proper nouns like names of places and products which don’t have a recognised sign of their own.  Once you’ve learned the shapes, you can practise by fingerspelling words for each other to “read”.  You could do a race to see how fast you can finger spell your name or even the whole alphabet from A to Z!

It’s thought that the “manual alphabet” was invented by monks in the 8th century.  They had taken a vow of silence and needed another way of communicating.  Well, that must have been exhausting, signing every single word!  They went on to teach fingerspelling to deaf people.

Deaf people often fingerspell very fast, and I ask them to repeat it more slowly.  It’s actually more difficult to “read” fingerspelling than to produce it yourself, because you’re looking at it “back to front”.  When you’re reading the fingerspelling, it’s best to use phonics:  sound out the words to yourself as children do when they’re learning to read written words.  This method works much better than saying the names of the letters to yourself.

The fingerspelling system used in BSL uses both hands, whereas most systems only use one hand, including ASL (American Sign Language).  You can see from the chart below that most of the actions look like the written letter.  If you’re right-handed, the right hand signs onto the left hand, and vice versa.  The only letters which don’t look like the written ones are the vowels, but these are easy to learn.  They go across the tops of your fingers.  You tap your thumb for A, your index for E, middle finger for I, ring finger for O and little finger for U.  On a course run by SENSE I once learnt how to communicate with deaf blind people by signing onto their left hand with my right hand.

Here’s a chart showing all the letters of the alphabet.  It shows how they look to you, the signer.  The “reader” sees them from the other side. 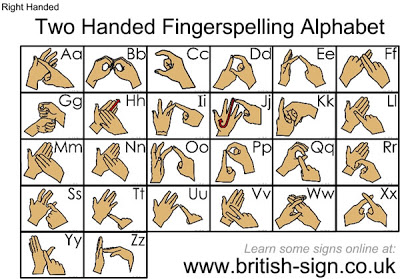 And if you’re left-handed: 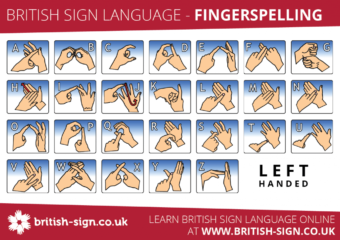 It’s worth remembering that if you look at one of the charts above, you get the impression that finger spelling is static.  It isn’t.  A finger speller’s hands are on the move all the time while they’re spelling out a word.  It’s a good idea to learn to sign the phrase “slowly, please”!

Do you think hearing children should learn to sign?  I’ve written about that here.

« Hygge, and how we recreated it at home
Autumn sun in Biarritz »