The first thing we noticed when we arrived in the beautiful town of Heidelberg was the enormous castle, or Schloss.  It’s set against the forest on the Koenigstuhl hill and towers over the Neckar River and the Altstadt, or Old Town.  We were spending a few days in Heidelberg at the end of the school summer holidays and our castle visit took up most of our first day there.  I was going to write a post about our visit to Heidelberg and include the Schloss, but decided it deserved its own entry.  The rest of Heidelberg can come later; there is so much to see in this lovely town. 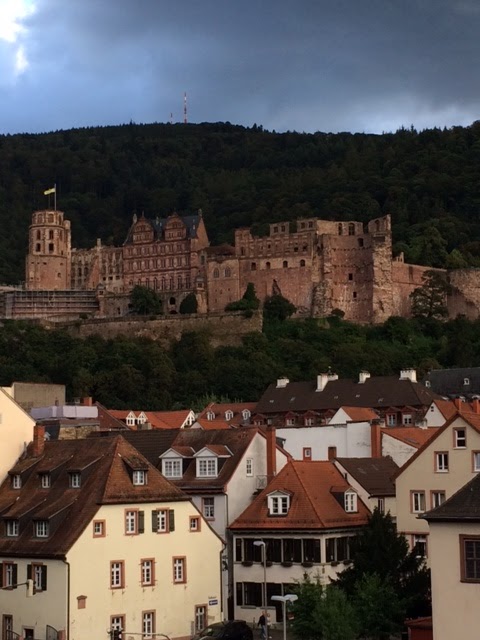 We bought Bergbahn (funicular railway) tickets to take us up from the Kornmarkt to the top of the Koenigstuhl for lovely views of the Neckar valley and wooded walks. 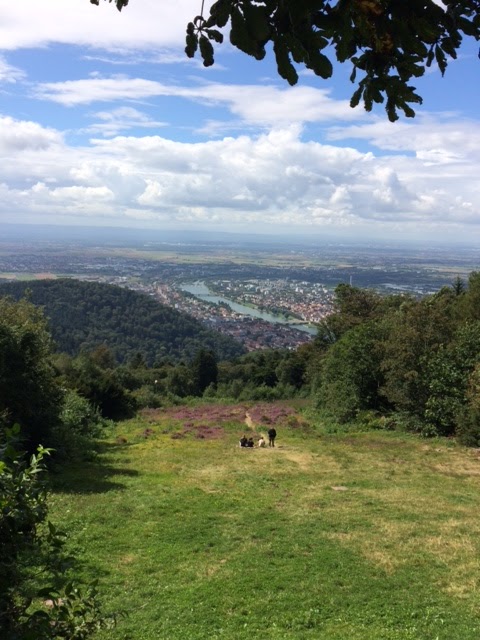 The price of 7 euros for adults and 4 euros for children included entrance to the castle on the way up or down.  The Bergbahn is 100 years old and it was funny to think that all those years ago people were sitting on the same glossy wooden seats.  One thing we didn’t realize was that there are parts of the castle not covered by these tickets; to see all parts of this vast palace you need to pay a bit extra (5 euros for adults, 2.50 euros for kids) when you get there and go on one of the hourly guided tours.  Anyway, we found that there was enough to keep us busy on the tickets we had bought.

First of all, a bit of history.  The Schloss started off as a defensive castle (called a “Burg” in German) for the local rulers and was first mentioned in 1225.  The buildings were initially built of wood and then gradually replaced with stone structures. By the end of the 14th century a simple defensive fortress was no longer considered grand enough for these rulers.  So under the local sovereign Ruprecht 1, founder of the University of Heidelberg, it was expanded into the kind of residence which he thought would reflect his rank.

By the beginning of the 17th century the Schloss had become one of the most famous building complexes in the Holy Roman Empire. You can see the mixture of renaissance styles in the grand facades around the central courtyard.  Here’s one of them, the Ottheinrichbau. 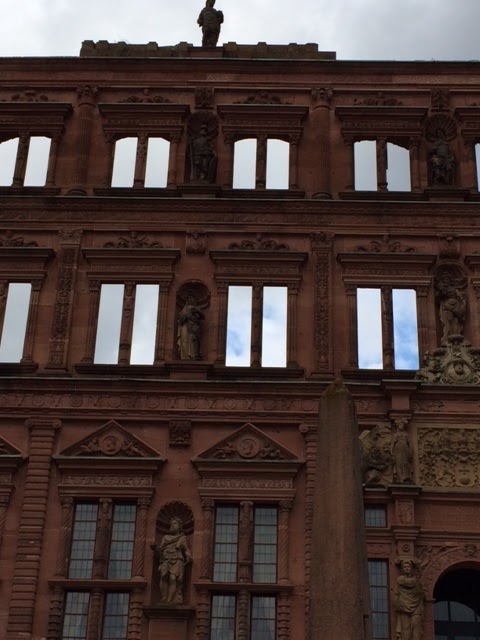 In the late 17th century the castle was repeatedly attacked and heavily damaged by the French, and afterwards some attempts were made to repair it.  Then in 1764 it caught fire after two lightning strikes and was left in ruins.  For some time after that the locals helped themselves to stones from the ruins to build houses in the town.

With the rise of the Romantic Movement in the 19th Century Heidelberg Castle became a national monument. It was seen as a monument to German history and attracted many romantic poets and artists (including William Turner) who loved the combination of ruins and nature, and the brooding atmosphere.  Since 1893 there has been some restoration but the Schloss is still regarded as a ruin, attracting around one million visitors a year from all over the world.

We were amazed by the size of the Schloss.  Lots of families were visiting when we were there and kids love castles!   My favourite outdoor spots were the huge terraces, because of their size and beautiful views over the city, Alte Bruecke or Old Bridge, and Neckar River. 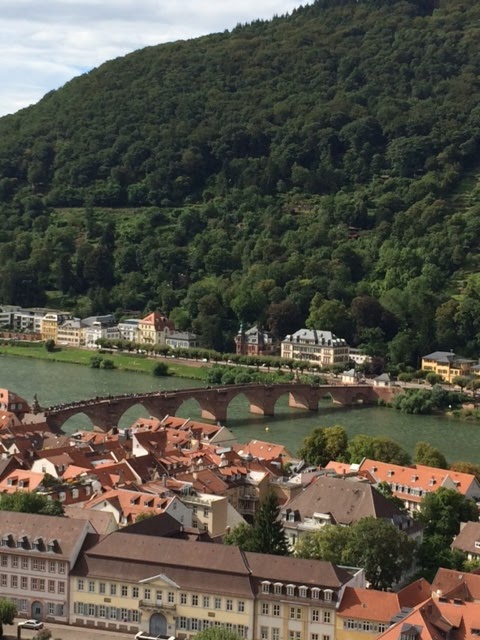 We thought the best one was the “Scheffel” Terrace named after one of the 19th Century romantic poets.  I should mention that major renovations are taking place in the castle’s extensive gardens and so parts of the terraces are barricaded off at the moment.

As for the castle itself, I loved the Fasskeller, or Barrel Cellar.  The first thing you see when you go in there is people sampling local wines and eating pieces of cake.  It was a bit early for the wine so we opted for other drinks but didn’t miss out the cake.  Himbeerkuchen mit Schlagsahne – fresh raspberry cake with whipped cream – gave us enough energy for another couple of hours’ exploring.  Cake is one thing we always include on trips to Germany, wherever we go.  And it turns up in the most unexpected places.

I’d heard about the enormous wine barrel in this room.  It was constructed in 1750 and held 200,000 litres of wine, which used to be pumped via a pipe into the adjacent banqueting hall.  We spotted a huge barrel and excitedly took a photo of our daughter in front of it to give an idea of the size. 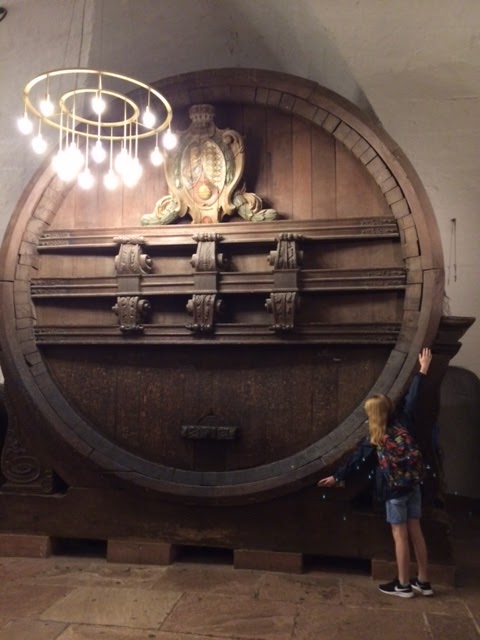 But wait!  I’d read that you could climb up some steps at the side of the barrel and walk on the platform on top of it, which was designed to be used as a dance floor.  Where were they?  No steps or platform were to be seen, and it was then that we noticed the real great barrel.  It was much bigger than the one we’d thought was huge.  It’s the largest wine barrel in the world, made from 130 oak trees and 7 metres wide.  We climbed up the wooden staircase to the side of the barrel and walked about on the top of it, where the privileged guests at the castle banquets used to dance. 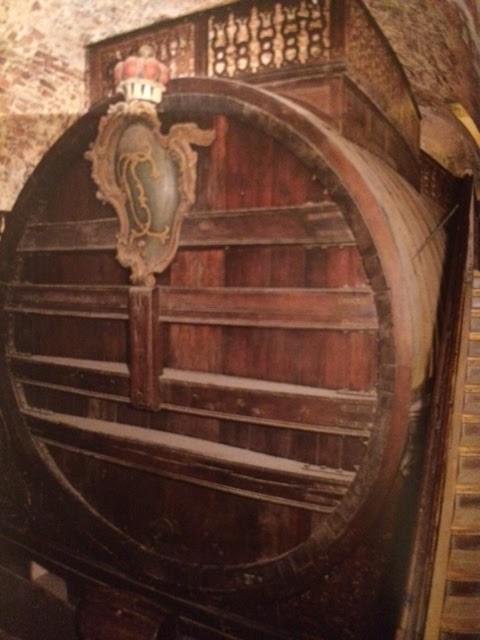 I forgot to mention that your approach to the barrel will be watched over by the painted wooden statue of a court jester called Clemens Perkeo, who according to legend could empty the entire great barrel in one gulp.

« What to watch in French: vintage TV series for kids (and adults wanting to chill out)
Funny books in French or German: Tom Gates, by Liz Pichon »