My daughter giggled her way through these books, and she read each one several times over.  As soon as I tried the books myself I understood why.  Although they’re thought to be aimed at boys aged around 10, I think they would go down well with anyone who likes a fun read.  The stories are full of affection and gentle humour.  The author, Liz Pichon is a children’s illustrator as well as a writer.  She plays with the type size in these books and intersperses the text with very funny doodles, making the stories especially tempting for reluctant readers.  Thirteen books have been published so far, and the latest one is due out in October 2017.

All of us can identify with the things that happen in Tom’s life.  The stories, originally in English, reassure us that it’s OK to get things wrong sometimes.  Tom has to find ways to cope with a very annoying boy called Marcus.  When his Grandma comes she makes exotic meals he doesn’t like, especially not cakes made with vegetables (have to admit that I’ve got a recipe book full of these).  At the same time he respects and loves his family and he likes having fun with his friends and (obviously) doodling.  He sings and plays guitar in a band and in one book they get a gig playing in an old people’s home.

On a visit to the well-stocked “La Page” French bookshop in South Kensington, my daughter spotted one of the Tom Gates books in French. “Les Friandises A Gogo (ou pas)” (literally, treats galore, or not) has been translated from the English “”Extra Special Treats (Not)”.  At the beginning of the story the annoying Marcus has won a badge for being the star pupil of the class, and he won’t stop going on about it.  Tom notices that all the teachers smile at you when you win that badge, and he’s determined to win one himself.  We have to wait until the end to find out if he does.  A snowstorm causes chaos (very British) and his family organizes a surprise party for this grandparents’ 50th wedding anniversary.  In a really positive message about learning languages, the author thanks her publisher in about 30 different languages – speech bubbles coming from cartoon characters.  At the back of the book there’s a key to this and a couple of fun games to make.

This photo of a page from the book shows Tom trying to eat loads of chocolate raisins without his mum noticing.  I’ve experienced both sides of this story!  It’s so funny, and if you’re not sure of the meaning of some of the words the artwork gives you plenty of clues. 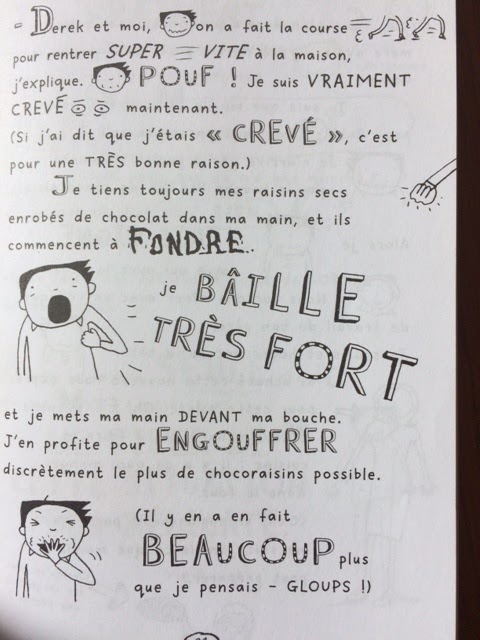 On our recent short break in Heidelberg, Germany we went in a huge bookshop, Thalia, and came out with a couple of baking books for me (another post) and yet another Tom Gates book my daughter hadn’t read in any language.  This one was “Ich hab fuer alles eine Loesung (aber sie passt NIE zum Problem)”.  Literally, this means I’ve got a solution for everything (but never the right one for the problem).  The original English is called “Genius Ideas (mostly)”.  In this hilarious book Tom goes on a school trip (Klassenfahrt) to the sort of place where you have to do lots of uncomfortable outdoor activities and stay in an uncomfortable hostel (shudder).  In the episode below, Tom is sitting in class at school and unwittingly comments out loud on his teacher’s huge eyes that never look tired. 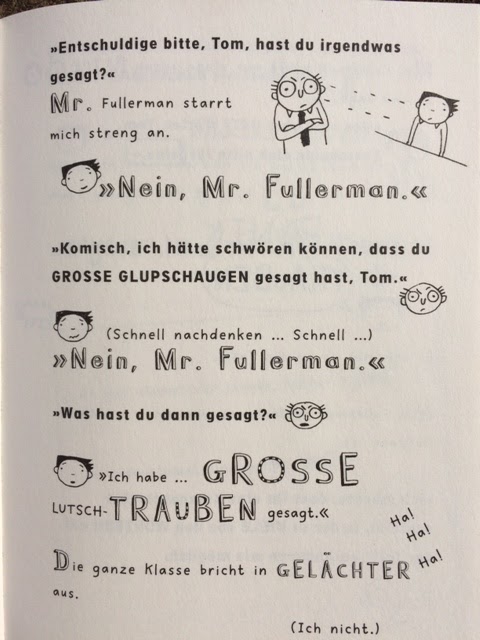 Through these books you can learn lots of useful, up to date words and phrases such as French “Youpi” for the English “Yay” and German “Genial” for the English “awesome”.  The best thing is sharing a laugh with your child or adult.