This was the scene last Sunday morning at our house: the weather didn’t look promising, and my husband had just dragged his cases out of the front door on his way to a business trip.  Something fun was needed, and a new Astérix film was showing at our local cinema.  It was “Kids’ Club” so that meant £5 for the two of us, not much more expensive than my daughter’s caramel fudge cooler from the cinema cafe.

There are plenty of laughs in this film.  We’re transported back to the year 50 BC, where Gaul (France) is completely occupied by the Romans.  Only one small village in Brittany is still holding out and Caesar (English version voiced over by Jim Broadbent) has realized he must change tactics.  Force doesn’t work, so he tries charm (infiltration) instead.  He instructs his legionnaires to build a luxury housing complex called “The Mansions of the Gods” near the village.  The idea is that the villagers will be lured by the business opportunities and the Roman comforts.  The village will be absorbed into Roman culture.  Of course Caesar reckons without Astérix (small, clever and bossy) and his friend Obélix (huge, not so clever, but of course by trade he’s a supplier of monument stones so he’s pretty strong).

Here’s the poster advertising the arrival of the film in French cinemas 2 years ago: 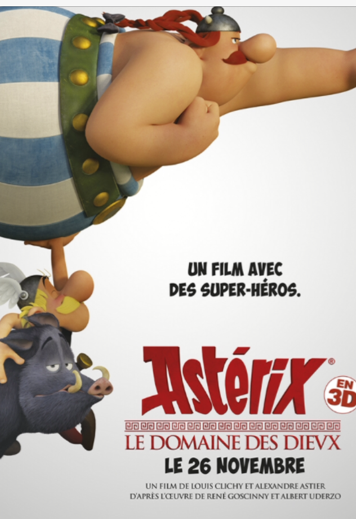 My daughter has just started Latin, so she could appreciate the other “Latin” names in this film, for example:

There’s an ecological message here, as the Roman slaves fell lots of trees to make way for the mansions and the Gauls find ways to stop them.  I don’t want to give away how the story unfolds, but here are a few of my favourite bits:

You see the Gauls charging towards the newly-built mansions, ready for battle, then they skid to a halt as they see a crawling baby in their path, and the Roman families standing behind.  So they are stopped in their tracks – these are real people, not just buildings.

Back in the Circus Maximus in Rome, the Romans are being “sold” the mansions by means of advertising on tablets of stone, the residences being “only 3 weeks away from the centre of Rome”.

The slaves felling the trees go on strike and actually manage to get paid for their work.

Some facts about the background of the film

The film, 85 minutes long, was released in France in 2014, and in the UK in August 2016.  That explains why the original French film is already available on DVD, whereas the English one won’t be available until 12 December 2016.  In the meantime you might catch it at the cinema.  Rated PG, it’s the first 3D computer animation of Astérix; at the end of the film I sat through all the credits so that I could get a glimpse of the huge number of animators involved!

The film closely follows and expands on the story in the Astérix comic book no. 17.  It was first published in 1971 and the English translation appeared in 1973.  Goscinny, also famous for that lovely book “Le Petit Nicolas”, wrote the Astérix stories and Uderzo illustrated them.  Graphic novels are popular in France and are known as “bandes dessinées”.  I’ve never read any, but I’d like to give them a try and I think this funny Astérix story would be a good place to start.  I’ve ordered it already.