Well, it’s 4 days since the EU referendum now and after that shocking result we have certainly got the cockroach (“on a le cafard”) at our house.  In fact, it feels like we’ve got a whole plague of them. 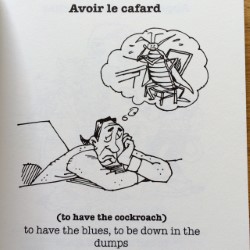 This cartoon is from the book “101 French Idioms” I wrote about in my last post, “We’re pedalling in the semolina“.  Idioms are established sayings which are recognized by most native speakers of the language.  They have a meaning which differs from the one suggested by the individual words.

The turkeys did indeed vote for Christmas.  They cut off their noses (or their beaks) to spite their face.

As a bit of a distraction I started thinking about other idioms and whether they’re similar in different languages.  I haven’t got any pictures for these but it could be fun to try and draw your own, or to get your child to do it!  Here are some examples I found.

French: Faire d’une pierre deux coups (Do two hits with one stone)
English: Kill two birds with one stone
German: Zwei Fliegen mit einer Klappe schlagen (Kill two flies with one hit)
Dutch: Twee vliegen in een klap (this one is provided by a Dutch friend, and seems exactly like the German one)

French: Dans un trou perdu (in a lost hole)
English: At the back of beyond
German: Wo sich die Füchse gute Nacht sagen (where the foxes say goodnight to each other) (this one is my favourite)

French: Courir deux lièvres à la fois (run after 2 hares at the same time)
English: Have your fingers in more than one pie

It would be interesting to find out the origins of some of the idioms and why they’re similar/different in different languages.  The German idiom “Ins Fettnäpchen treten” means “to put your foot in it” in English.  It comes from the days when a bowl of fat was kept near the front door ready to be applied to people’s boots, and if you knocked into it or trod into it by accident you were in trouble.  Just like some people get into trouble by making a gaffe.

I like the English idioms below because they’re such fun to visualize, but can’t find any equivalents in the other languages:

Any ideas for these in another language?

Previous Post: « French idioms for Brexit (1): we’re pedalling in the semolina
Next Post: What to watch on kids’ TV: German and French »