My daughter and I watched the recent “Victorian Bakers” programmes on BB2 and were shocked at what a hard life the Victorians had.  The series showed what arduous work it was in the Victorian bakery, with huge manual hand cranks, progressing to steam-driven machines, and no electric machines until around 1900.   We didn’t much like the look of the things they ate. Someone was making a bone marrow sandwich for their lunch, and we saw them slicing up a very tongue-shaped tongue. I’m sure a Victorian butcher’s life was even tougher.

Watching this series reminded me of stories I’d heard about our German ancestors the Kraemers, who actually were Victorian butchers.  My great-great grandfather Johann Kraemer migrated from rural Germany to Sheffield in the 1870s, worked as a “butcher’s boy” and then opened his own pork butcher’s shop. The business expanded and was run by the family for over 100 years.  At the moment Channel 4 is running a series about migrants in the Page Hall Road area of Sheffield.  One of the Kraemers’ shops was on Page Hall Road, so the migrants starring in the Channel 4 series were by no means the first to settle there.  Sausages and pork pies were affordable Victorian “fast food” and went down very well with the local population of steel workers.

In the Victorian Bakers programme we were told that in the late 1880s half the bakers in London were German.  They were escaping political and financial problems at home and Industrial Revolution Britain was booming.  The borders were open and they didn’t even need a passport.  I wonder how they learned English!  My Grandmother told me that Johann (her grandfather) was escaping military service, and he and his wife Anne came from very poor farming families in Wuerttemberg. When a farmer died his land was usually passed on to the eldest son, and the others had to fend for themselves. Life expectation was short.

The migrants from these poor rural areas knew how to slaughter and butcher their own pigs, and they brought this skill with them to British industrial cities.  The Kraemers were well known in Sheffield for using every single part of the pig. They even made sweet things: cakes (“Schmalzgebackenes”) out of lard.  My Grandmother used to love to eat pigs’ trotters and pigs’ cheeks, and I remember being horrified at seeing the side of a pig’s face lying on the side in her kitchen.  It was too recognizable!

How to make a sausage

Here’s a picture of a Victorian sausage-making machine. It’s a photo taken from Sue Gibbons’ book “German Pork Butchers in Britain”, published by the Anglo-German Family History Society in 2001. To work the machine, you attached the sausage casing (pig’s intestines) to the end of the nozzle, fed a minced pork mixture into the barrel and turned the handle.  The mixture was piped out of the nozzle into the casing.  If you didn’t pack the mixture tightly enough, bubbles of air would get into the sausages and they would live up to their name of “bangers” when cooked. 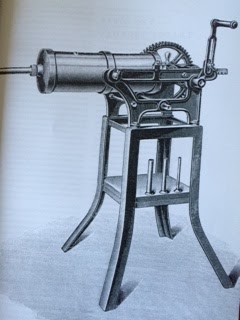 The Victorian Bakers programme was obviously a spin-off from the hugely popular programme “Great British Bake Off”.   A series called “Victorian Butchers” might not have the same visual appeal for the viewers, with whole pig carcasses instead of cake mixtures.  I’ve never been keen on sausages or ham; the family pork-eating tradition seems to have fizzled out…..