Today is one of our special Galette des Rois cake days.  We always feel a bit “flat” when we’ve taken down our Christmas decorations.  Most people go back to school or work this week and it’s the end of all that special Christmas food.  The Easter eggs are in the shops already.  Hardly anyone waits until January 6th to take the decorations down.  The “Twelfth Day of Christmas” is barely noticed here in the UK.

In some countries with a Catholic tradition January 6th is still celebrated.  I heard that in Poland the local priest blesses chalk and people use it to write the initials of the magi and a blessing above their front door.  In Spain, the “Three Kings” bring presents for the children and there are spectacular parades the day before.

To brighten our day and start a new tradition in our family, we investigated the French Galette des Rois or Epiphany/Three Kings cake.  Different areas of France have their own types of cakes, mostly puff pastry with a frangipan filling but also various types of brioche (sweet yeast dough) cakes.

A porcelain figurine called a “fève” (lucky charm) is hidden in the cake and baked with it.  The person who finds the charm in their portion gets to wear a paper crown and be king or queen for the day and have the others do things for them.  Or that’s the idea. In some families the youngest child (this could also be an adult!) sits under the table while the cake is being cut and shouts out the name of the person who should receive the next portion.   For young children, disappointment can be too much to bear and the cake-baker might want to distribute several lucky charms in the cake.  I had an image in my head of someone breaking a tooth on the charm or swallowing it, so I  put a red kidney bean in our cake instead of a porcelain figurine.  I didn’t think far enough in advance to buy a figurine and anyway the bean would be safer.  For well-organized bakers there are all sorts of lovely figurines to buy and some people collect them.

You can buy Galettes des Rois in French bakeries throughout January, which is a good way of brightening up a dismal month.  If you haven’t got the time or inclination to invite friends for a full meal you could invite them for tea/coffee and cake instead.  And the person who gets the lucky charm could be the next person to buy or make the cake.

There are loads of French Galette recipes on the internet, in both English and French (gâteaux d’Epiphanie or galettes des rois).  We chose a brioche recipe with vanilla custard (crème pâtissière) filling.  It was in a book called “Tartes et Gâteaux”, by Paulette Fischer, published in 1985 and full of mouth-watering photos.

When it comes to kneading the brioche dough, anyone can have a go, even a two year old.  My daughter started helping me make bread at age two and used to love handling the dough and seeing how much it had risen after an hour in a warm place.  Another fun part is making the crème pâtissière because you can watch it thicken in the pan and it smells like ice-cream.  You won’t want to eat custard made from yellow powder after you’ve tasted this. 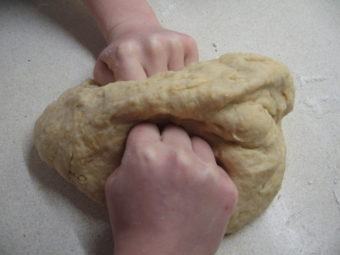 The difficult part was waiting for the cake to cool down enough after baking to split it and fill it with lots of sticky vanilla custard.  Just a sprinkling of icing sugar on top and it was ready.   Miam, miam, yum yum!  My husband found the bean in his portion, put the paper crown on but was disappointed in its effect.  After all, by tradition it’s his job to put  the decorations away in the loft.  My daughter was disappointed to see her Dad crowned “king” for the day and maybe this is a good reason to have another try next week! 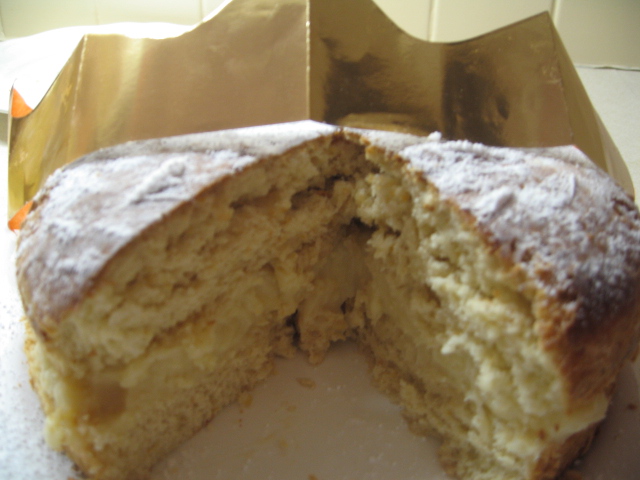