This article includes a guest post by my canine friend Jessica.  To start with, she kindly posed for her photo in the garden of the house where she lives with her humans. 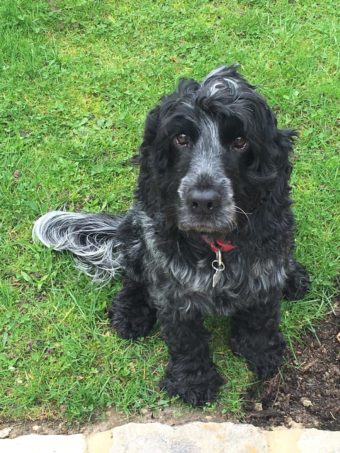 This is what inspired me to ask Jessica to provide the guest post:

The other day the website www.borrowmydoggy.com was advertising a new smart collar (both meanings of the word “smart”) for dogs.  This special collar monitors heart rate, temperature, pheromones and motion to detect how your dog is feeling, and speaks accordingly.  Here’s the link for the collar: www.hollacollar.co.uk.  Well, I’ve seen some funny dog accessories before – including dog perfume in a French shop – but this one takes the biscuit.  The special introductory price of £24.99 ran out at midday on April 1st and it seems they don’t have any left.  That’s a shame because the collar looked promising: “Wondering if your dog is barking at the neighbour’s cat, or trying to scare off the postman?  Using and adapting groundbreaking technology the collar translates your dog’s thoughts into human words, so wonder no more – wooftastic!….A waterproof microphone speaks over 50 words, from walkies to belly rubs to food.”  There’s a picture of a dog “saying” SQUIRREL, which must be one of the most frequent words in a dog’s vocabulary. You just might be able to guess what your dog is saying by the situation and its body language….

I enjoyed this joke, and it reminded me of the works of cartoonist Gary Larson, popular during the 1990s for his surreal cartoons comparing the behavior of supposedly superior humans with other animals.  A lot of them are based on the silliness of humans or on a “What if?” scenario.  He’s also an environmentalist, retired from cartoon drawing now, and he’s asked his fans to stop sharing his work on the internet.  So I can only summarize my favourites:

We see a man burdened with all sorts of heavy equipment.  He’s finally managed to invent a machine which translates dog’s barks.  As he walks along the road he discovers that each one is saying the same thing: “Hey! Hey!”

A man is reading a note left by his dog, in childish writing and with miss-spellings and reversed letters: “Master, Me and Rex took the kar to town, stay home!  STAY! Ha ha ha ha, the dog.” And in the picture below we see the dogs riding along in the car, punching the air and enjoying their freedom.

Well, it’s April 12th now, so I’m stretching it a bit, but here’s Jessica’s guest post.  She’s keen to give us humans an insight into what life is like in Doggy Day Care.  I’m told by her humans that this is (seriously) an accurate picture of life in a dog nursery.

My days at Doggy Day Care

“My name’s Jessica.  I’m a cocker spaniel with glossy black fur and a white patch on top of my head.  I live in London with my three humans.  I get plenty of fun and walks with them, apart from when they’re all at school or work.  That’s when they don’t want me to spend all day in the house by myself, like those dogs in the Channel 4 documentary.  A hidden camera showed us those lonely dogs howling and pacing about, and the solution put forward at the end of the programme was a dog TV channel.  But I don’t want to watch other dogs leaping about in the fields when I’m stuck at home on my own.  I want to be part of the action!

Whenever my humans are out all day, I get to go to Doggy Day Care.  It’s a bit like those nurseries you see for small humans.  The human who runs it is called Anna, and when I was a puppy she got to know me by coming to our house and taking me out for walks.  Then she took me for a short visit to the day care house and garden.  At first the smell of other dogs was overwhelming, especially in the garden, where the smell of wee and poo knocked me backwards on that first day.  Well, now I spend two days a week there and I hardly notice it.  Humans seem to be unaware of it because their noses are so much smaller than ours.  I’ve noticed among my friends that the longer the muzzle, the keener the sense of smell.

When our car pulls up outside the dog day care house I see the downstairs curtain move aside as the earliest arrivals have a peek to see who’s coming in next.  I trot up the drive and straight into the hall to the waiting wagging tails and sniffing noses.  It’s funny how all the boys go straight into the garden to cock their legs and we girls don’t bother.  Wherever the boys go they make sure they always have a drop left to mark out their land.

Once all the dogs have arrived, some of us are taken out to the park while the rest stay in the house.  We don’t get the free run of the house;   Anna has learnt from experience.  We have to stay in the kitchen or the “quiet room” where all our beds are. Some of us bring our own beds and others like to sleep in crates.  Haizy, a mixed breed from Battersea, lives here all the time, sleeps upstairs and I wonder if she’s allowed on the humans’ beds.  When the first group get back, the rest of us are taken out.  New dogs stay with Anna all the time.

I’m one of the dogs who’s allowed off the lead in the park, so I can follow whatever smell trails I want and make new friends.  I’m careful about who I approach.  If anyone looks the least bit threatening I retreat and make myself look as small as possible.  I just don’t want any trouble.  I’ve learned that big dogs aren’t always aggressive.  One of my friends at day care is Chester, a large and gentle golden doodle.  There’s  a puppy living at his house called Jelly, who was probably a bit wobbly when he was little like we all were, and  I know he’ll be starting with us soon because he’s been for some short visits to get him used to it.  I’m quite honoured to be set free in the park.  Anna knows now that I’ll come back when she calls, so I can bounce around and play-fight with my friends while some other unfortunates have to stay on a lead.

The names of the dogs might tell you the personalities their humans want them to have.  We don’t have anybody called Tyson or Brutus.  I’m glad about that.  We have schnauzers called Murphy, Frankie and Ralf, and those names suit them somehow, with their bushy eyebrows and beards.  Some of the names are the ones you hear for new humans, like my name, Jessica, and Millie (also a spaniel) Ruby, Alfie and Pippa.  Those must be the favourite names left over when the humans have stopped having little ones.

When we get back after our first walk of the day, we can play inside the house or in the garden, if the weather is dry.  If we get too excited outdoors and do too much barking, Anna rattles her tin with all the treats in and we all go into the house, have a biscuit and calm down.  We need to spend some time in our beds, or we get exhausted with all the excitement.  I don’t always feel like going to my bed when I’m told, so I try to sneak off, but in a small group it’s hard to get away with that.

There are two types of dogs at our day care house: day dogs and holiday dogs.  The holiday dogs stay overnight while their humans are on holiday, sometimes for as long as two weeks.  Even after a year’s absence they still seem to remember the house and the routines.  Some dogs are here every day, for a few hours or all day, so they know each other and there are always one or two extra dogs to make it more interesting. We get on well together and Anna gets to know our personalities.  If we bring our own toys from home there can be problems, and Anna once had to sort out a dispute over a ball somebody had brought.  I’ve seen her putting toys from home in a “safe place”.  Special porcelain bowls from home get the same treatment.

Our toys are communal: we have balls, ropes and frisbees.  Anna soon notices if one of us is possessive about a certain toy, and she acts quickly.  Just as we’re having fun, and doing a lot of growling, she intervenes and takes our toy away.   She once bought us a fluffy toy from a charity shop but Murphy (Spanish waterdog) and Monty (mixed breed, a bit like a wolf) played tug with it and it ended up shredded all over the lawn.  One of the humans was worried that her dog might be upset and pine for her on the first day, so she left her sweaty running shirt for the dog to smell.  Anna later intercepted four dogs in the garden, who were pulling the shirt in all directions and stretching it to fit a human giant.

Most dogs only have one meal a day, in the evening, so we don’t have lunch at Anna’s.  One of my friends regularly has breakfast at home, but not when he comes to us.  He recognizes the signs at home that it’s a dog nursery day, and gets so excited that he can’t eat his breakfast and has to bring it with him and eat it after the morning walk.  Any food from home is kept in a special box and labelled, eg. “Willis’s box”.

In the afternoon we get our second walk, and that involves some road walking on the lead.  Some dogs are better at this than others.  I’m pretty good at this and can walk next to my human without pulling them over.  I’ve noticed that some humans make their dogs take jackets to nursery for going outside in winter.  That’s not for me, because of my thick fur, and because I don’t want to look like a human, but it probably helps my whippet and terrier friends.

Later in the afternoon the humans start to arrive to pick us up.  Frankie’s lucky, he gets picked up by a younger member of his family on his way home from school, so he probably gets some forbidden titbits when he gets home.  I’m always really happy to see my humans, and I love meeting their friends.  Everyone makes a big fuss of me.  But Doggy Day Care days are really good fun and I can’t wait for the next one”.

Back to me now.  In my post “Give a dog a good name” I’ve written about our borrowed dog, Hamish, and about the names we give to dogs.  I’ve also written a short Dog Phrasebook.  If you have any stories about your dog’s language please write about them in the Comments section below!

« Schönbrunn, Austria: so much to see!
Dog Phrasebook »