As you can see from the photo below, we couldn’t very well miss this baroque church, on the Karlsplatz not far from our hotel.  The green dome of the beautiful Karlskirche, or St Charles Church is a prominent feature in the city centre and on the Vienna skyline.  The church holds regular concerts in the evenings, with great acoustics and atmosphere.  Vivaldi’s The Four Seasons was being held while we were staying in Vienna in August 2017.  Tickets for the concert cost 38 euros, and 28 euros for children. 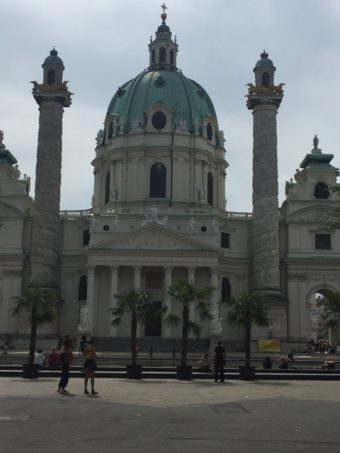 The church turns out to have an extraordinary history.  In 1713-14 a plague epidemic killed 8,000 people in Vienna.  When it ended Emperor Charles VI vowed to build a great church to honour St Charles Borromeo, the patron saint of plague sufferers.  On the portico at the front of the church there’s a massive carving showing dead people being carried away and the survivors begging for an end to the plague.  Construction of the church took 20 years and even remote parts of the Hapsburg Empire were instructed to contribute by sending building materials and money.

When we arrived in front of the church we were surprised to find a patchwork of building styles from different periods and cultures.  There’s the portico which resembles a Greco-Roman temple and the tower rooftops like Asian pagodas.  Then there’s the baroque dome 74 metres high, and the huge columns and towers in the style of Byzantine and Ottoman architecture.  All these combined were intended to glorify the emperor, endorse Vienna as the capital of a world empire and give thanks for Vienna’s deliverance from the plague.

When you enter the church (for an entrance fee) you receive an information booklet explaining the art and design inside the church.  I was amazed by the huge marble pillars and ornate white and gold décor.   Some of the greatest painters of that time created the works of art in the six side chapels.

Then you notice the scaffolding.  Let your eyes follow it up and you’ll see spectacular frescoes way above your head on the inside of the dome.  I was left wondering how they managed to paint these at a height of about 70 metres in the early 18th century.  These dome frescoes, which are world famous, are being renovated; visitors can use the temporary glass lift by the scaffolding to get a really close view of them.  The central image apparently shows God answering St Charles’s prayer for an end to the plague.  Another image shows the church surrounded by symbols of the celebration of Holy Mass.  The lift takes you up the equivalent of about 7 floors, which my husband and daughter braved as they both have a good head for heights.  This trip is not for the faint hearted.  My daughter said later:

“When we got out of the lift, we walked on a large platform to look at the wall paintings.” 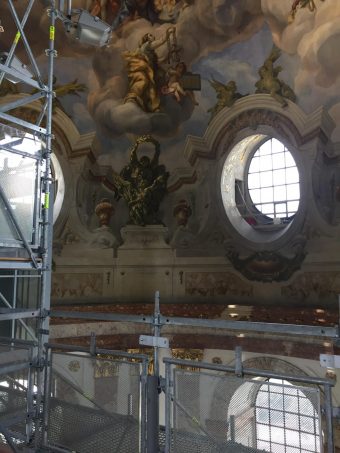 “Then we climbed 10 flights of wobbly stairs, and I took this photo about half way up.” 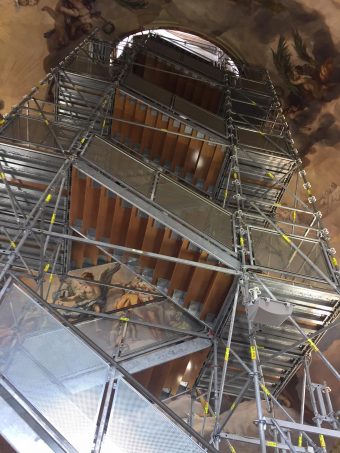 “We arrived at the very top of the church, with only the tiniest dome above us.  There was a painting of a dove radiating light and clouds and cherubs surrounding it.  This is meant to represent heaven.” 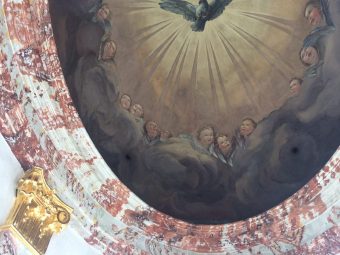 We couldn’t look down into the church; we were so high up that it was too scary!  I remarked on how brave the wall painters must have been to face this height every day.  Dad admitted that he’d rather be unemployed than do that job!”

Well, the climb was a bit too scary for me so I opted to sit and admire the magnificent high altar instead of going up in the lift with them.  On the right hand side just before the altar is the first floor window where the emperor used to sit when attending mass.  At the high altar are the most impressive decorative columns of the whole church.  A feeling of a “pull towards heaven” is created with the carving of St Charles in his cardinal’s hat, rising towards heaven, and above him a huge wreath of clouds.  God’s light is breaking through the clouds and the dazzling centre of this light bears the name of God in Hebrew script.  The light is of course streaming in through a window and is much brighter than it looks on the photo. 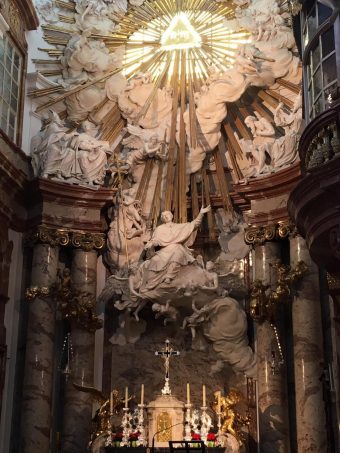 So you see, even if you don’t like heights, you’ll still find enough works of art to admire from the base of the Karlskirche.  If you can manage the 70 metre trip up to the top of the dome you’ll be rewarded with a unique close-up of 18th century paintings.  Awe-inspiring.  It’s hard enough just painting your bedroom ceiling, and that’s only in one colour.

Previous Post: « French films for all ages
Next Post: Where to linger over coffee in Vienna: the famous Cafe Central »