My top three films for adults and kids to watch together

Our family favourite is: Le Petit Nicolas (2012, certificate PG, 89 mins), based on the first book in a very funny series written by René Goscinny and illustrated by Jean-Jacques Sempé. I think of Nicolas as a sort of French precursor to the Wimpy Kid and Tom Gates.

This is the DVD: 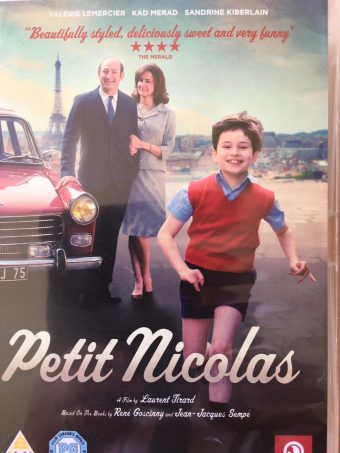 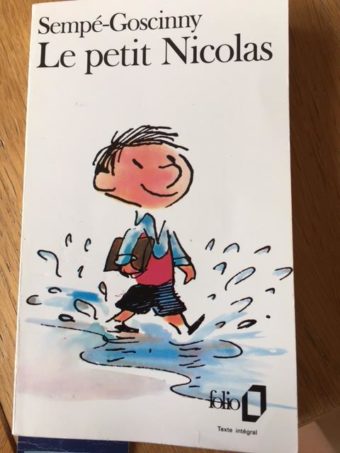 The film’s in French with English subtitles, so even non-French speaking adults can laugh with their kids at the adventures of 8 year-old Nicolas and his mischievous school friends. The story is told through Nicolas’s eyes and I love being the same age as him for an hour and a half.  The adult world baffles these boys.  They’re growing up in the 1950s/60s, with TV sets as deep as they are wide and a dubious taste in wallpaper.  That’s to say nothing of having to write “lines” for misbehaving at school and – worst of all – being shown up in front of the whole class for getting a poor school report.

Nicolas is the only child of doting middle class parents.  He’s happy to be an only child: “Ma vie est chouette et je ne veux changer rien”.  One of his classmates gets a new baby brother and is full of shocking stories about how his life has been ruined by the intruder. The boys gather in the playground to listen and offer advice.  Shortly after that Nicolas misunderstands a conversation he overhears at home and thinks his mum is pregnant.  He’s all too aware of the horrors to come and imagines himself abandoned in the forest like Tom Thumb so that his parents can look after the demanding new arrival.  To stop this from happening he enlists the help of his imaginative classmates, who cook up all sorts of pranks.

The humour is drawn from situations, and from misunderstandings of the adult world.  It’s a kind-hearted film, although the class smarty pants, Agnan, “le chouchou de la maitresse” (teacher’s pet) reckons the others would end up thumping him if he didn’t wear glasses.  The characters are all likeable: there’s Geoffroi the rich boy, Alceste the foodie, Clotaire the dreamer and Eudes the troublemaker.  All these characters play their part in the pranks.  Agnan can take charge of the class and Eudes can distract the teachers at the right moment.

There’s a twist at the end of the film which I’m not going to reveal; I’ll just say that it all turns out happily in the end.

We found the sequel to this film, “Le Petit Nicolas en Vacances”, disappointing as it’s a bit too contrived.

In second place, Une Nuit de Chat (A Cat in Paris) is a brilliant animated drama for everyone from about age 9 upwards.  It was made in 2012, rated PG and is only one hour long.  Our DVD allows us to watch it in French with English subtitles, or in dubbed English: 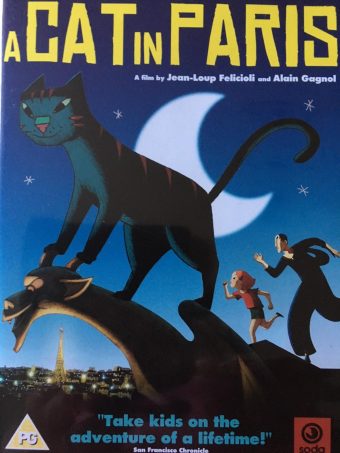 It’s an exciting, fun animation about a cat who is a girl’s pet during the day and an assistant to a burglar at night.  The accompanying jazz music is great, and the artwork amazing.  It touches on some serious themes like loneliness, betrayal and revenge, which is why I wouldn’t recommend it for younger kids.

In third place is the documentary film Etre et Avoir (2009, I hr 40 mins, French with English subtitles) a beautiful portrayal of country life in France. The French is slow and easy to understand.  Some kids might find the action a bit too slow.  It’s about a small village school in the Auvergne and follows the headteacher’s and children’s day-to-day life for a year, so we witness the changing of the seasons in the countryside.  For a child brought up in urban Britain this film is an eye-opener. 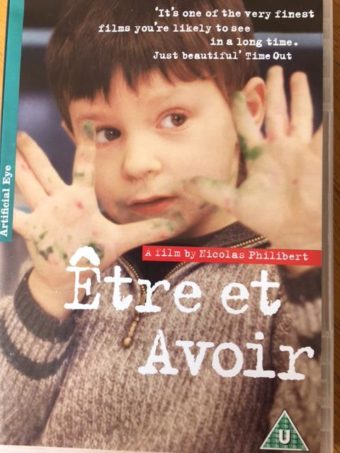 There are only 12 children in the school, aged 4 – 10 and as you’d expect they each have their own strengths and difficulties.  The dedicated headteacher, Georges Lopez is in his final year before retirement and after teaching for many years he’s still sensitive and patient with the children.

Otherwise, I’ve often simply chosen to watch a film in a different language.  My daughter has loved the film Totoro since she was about six; it’s the French version of My Neighbour Totoro.  This is a simple, beautiful Japanese animation by Miyazaki. It features two strong, independent sisters who are befriended and helped by the whimsical forest creature Totoro and his shy little friends.   If this had been an original French film it would have tied for first place.  Stunning. 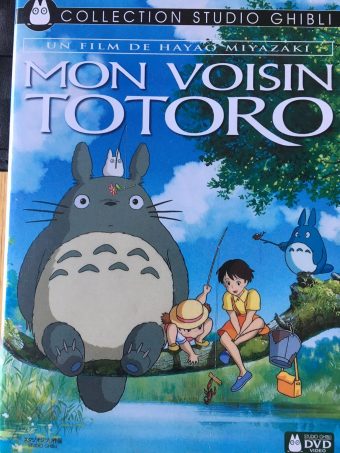 French children are not expected to be as sentimental about animals as British children (and adults!).  Only you know what your kids can handle.  When my daughter was younger I was constantly explaining that stories needed to have a “problem” or sad bit in the middle which was then solved, otherwise there would be no story.  Sometimes these problems turned out to be a bit too serious for a sensitive child (or adult!) to bear.  And once you’ve seen a film once you can’t “unsee” it, which I found out for myself once when I watched Nicolas Roeg’s terrifying film Don’t Look Now (shudder).

La Gloire de mon Père (1990, 107 mins) – I like this film, but it’s most suitable for teens and adults.  It tells of the childhood of filmmaker Marcel Pagnol, who was born in 1895.  Our DVD is in French with French subtitles, so this one’s better for viewers who know some French.  If you know the language it’s easier to follow the story and learn from it when the subtitles are in the same language as the spoken script.

Marcel’s father is a teacher in Marseilles and the family spends an idyllic summer holiday in the hills of Provence.  The scenery is lovely, the costumes gorgeous and the characters are likeable, especially the mother. Marcel makes friends with a local boy called Lili and they learn from each other about the contrasts between town and country life.  There’s a feeling of freedom and safety as they enjoy the countryside together.  The reason I wouldn’t recommend this film for younger viewers is that it has scenes which show birds being shot.  The title “La gloire de mon père” refers to the occasion when Marcel’s father, a novice at hunting, manages to shoot two birds.  Lili is too young to go shooting so he traps birds on the ground and there are some close-up shots of this.  Hunting is a way of life in the French countryside and that comes as a bit of a shock for British kids.

We can all identify with Marcel’s sadness when the weather turns autumnal.  It’s time to leave the countryside and his new friend and return to Marseilles for “la rentrée”.  There’s a touching depiction of Marcel’s naïve attempt to stay in the countryside instead of returning to town life with his family.

Le Château de ma Mère is the sequel to this film, but it has a terribly sad beginning and ending.

La Mèche Blanche – les aventures du petit castor – is the live-action story of a beaver.  It’s licensed for “Tous publics” but my daughter remembers it as “too sad and scary” and reckons it should be licensed “18”!  The story takes place in Canada, and the “problems” include baby beavers being chased by wolves and a forest fire in which the beavers’ dam burns down and they nearly get killed.  The fact that the animals are real as opposed to animations makes it all a bit too real and stressful for little ones.

Le Renard et l’Enfant is also a live-action film licensed for “Tous publics”.  A girl and a fox become friends but the girl makes the mistake of taking the fox into her house.  The terrified animal jumps through the glass of an upstairs window, lies bleeding on the terrace below before running off and refusing to have anything more to do with the girl.  The breakdown of trust is nearly as distressing as the accident itself.

Boule et Bill looks like a fun live-action film about a boy and his spaniel.  It’s meant to be a comedy film, but most of the comedy arises from teasing the dog.  I have a memory of him having to run alongside the family car, his lead trapped in the car door.

Belle et Sébastien (2013) is a live-action film based on Cecile Aubry’s novel of the same name.  This is the modern version – there has also been a French TV series and an older film.  The mountain scenery is stunning and the dog is adorable, so you might expect this to be ideal viewing for children.  But I’m not sure that it is.  Something or someone has been killing the local sheep, and this stray dog, Belle, gets the blame.  Sébastien knows that the dog is innocent and makes friends with it.  The story has a strong positive message: protect the weak and fight for what you believe in.  The story takes place during the Nazi occupation of France; this gets a light touch but the rather “intense” themes involving unbearable suspense, alcohol, guns, hunting and death make this film more suitable for teens and adults.

When my daughter was little I tried to watch the films without her first of all, if I was doubtful.  That way you avoid that “aaaaargh” moment when something upsetting is shown (for example I once came upon a rabbit being skinned) and it’s too late to do anything about it!   As with all books and films, so much depends on personal taste and sensitivities.  Little Nicolas, the Paris cat and Totoro have been watched in our house over and over and over….

« My cakewalk: cheesecakes and all sorts of Polish cakes
A close-up of the Karlskirche, Vienna »