What do you “see” in your mind when you’re engrossed in a story?  It’s amazing how black marks on paper can transport you to another world.  I love reading and getting immersed in a story, and I think I build a hazy picture in my head of what the people and places look like, but not in as much detail as when I’m watching a film.

Have you read stories told in pictures as well as words?  I love picture books, where beautiful pictures expand on the text; my husband bought me The Gruffalo long before our daughter was born.  In “graphic” stories the pictures and the text have equal importance in telling the story.

Graphic stories are told in small pictures, each framed in a box or in an empty margin.  Each picture has speech bubbles and sometimes sound effects or a short narrative sentence.   You follow the images in sequence across the page.  Some books are a sort of mixture between picture book and graphic novel.  There’s the lovely Plumdog by Emma Chichester Clark, told in pictures, with narrative from the dog’s point of view instead of speech bubbles.  Plum’s charm comes from having both human and canine feeelings!  Brilliant illustrations, and I was chuckling all the way through.  It’s the diary of a whole year in Plum’s life. 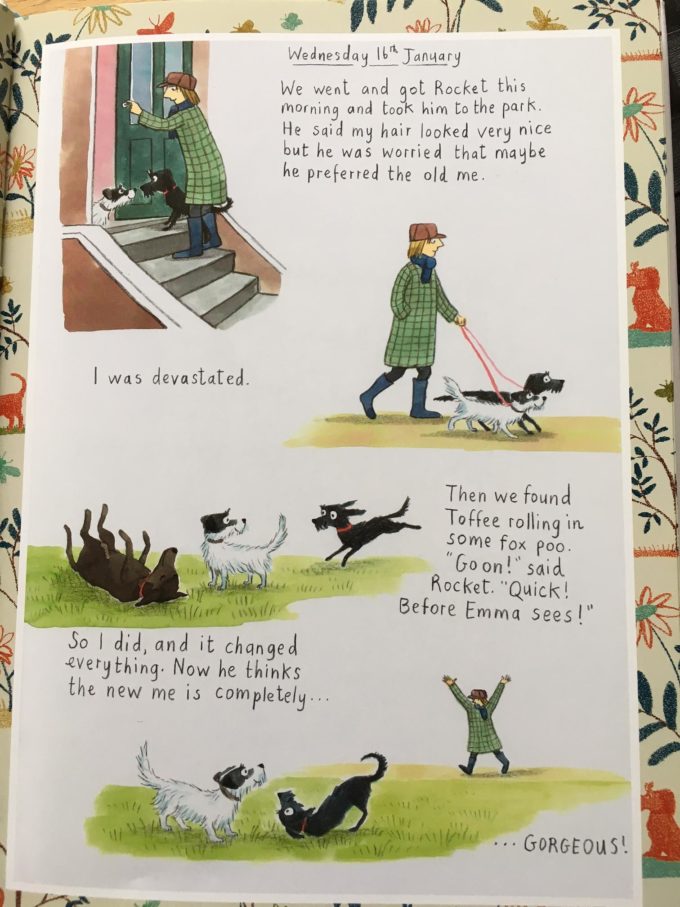 Our brains work in a different way when reading a graphic novel.  We read the words and take in the pictures at the same time.  Our eyes don’t run straight across.  Instead of description we take in facial expression and body language to help us understand the characters.  Unlike the experience of watching a film, where there is constant motion, it’s left to our imagination to fill the gaps in the action between the boxes.

Exploring in La Page French bookshop in London (see my post: multilingualmum.com/2016/11/la-page-french-bookshop-in-south.html) I noticed the shelves full of graphic novels, or Bandes Dessinées. They’re popular among adults as well as children in France, but not so well-known in the UK.  I started browsing.  I soon discovered that the graphic novel is a format, not a genre.  All kinds of fiction and biography can be written in this style, so the word “novel” is a bit misleading.

The term “graphic novel” sounds very serious, especially as “graphic” can mean “vivid” in a description of something unpleasant.  Perhaps “comic book” would be more appealing?  But the content might not be comical.  “Cartoon strips” or “comic strips” are shorter.  Nobody seems to have found an alternative to “graphic novel”.

A graphic novel, then, is in the style of the “comics” I used to read as a child, but longer and with a hard cover.  In my childhood experience, “comics” meant Beano for boys and Judy or Bunty or Jackie for girls.  My Dad used to have them on order at the newsagent near to his shop.  On Saturdays, just before Dr Who, the living room door would open and he would appear with the comics.  I was about to find out how The Four Marys got out of the predicament they were in last week.  It seemed unfair that the writers and illustrators of those comic serials were anonymous.  I’ve found a nostalgic website about these stories: girlscomicsofyesterday.com.

Graphic novels or comic/cartoon stories can encourage kids to read.  Through films and the internet they are already used to understanding things visually.  The pictures give clues to the text because they’re part of the story.  The range of vocabulary is the same as in a traditional book, but the sentences are shorter.  The fact that the sentences are isolated within the image box means that they stand out more.  I notice this effect when I read a French graphic novel with some unfamiliar colloquialisms.  My understanding is helped by the images and I find the new phrases easier to remember in this context.  I’m also able to remember the phrases better because they stand alone, rather than being surrounded by lots of text.

At this point I just have to recommend this brilliant book, also available in German and Spanish, for language learners who want to build up their colloquial French: 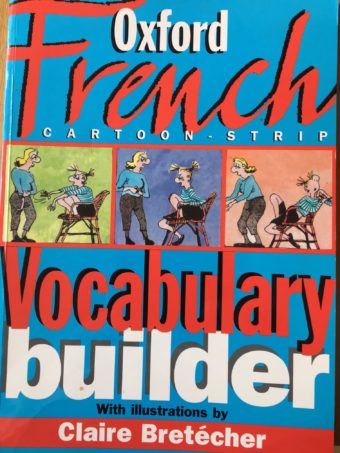 My daughter has done a lot of “storyboarding” at school.   Her Religious Studies class was asked to show the Sikh story of Khalsa in pictures, and this is what she produced: 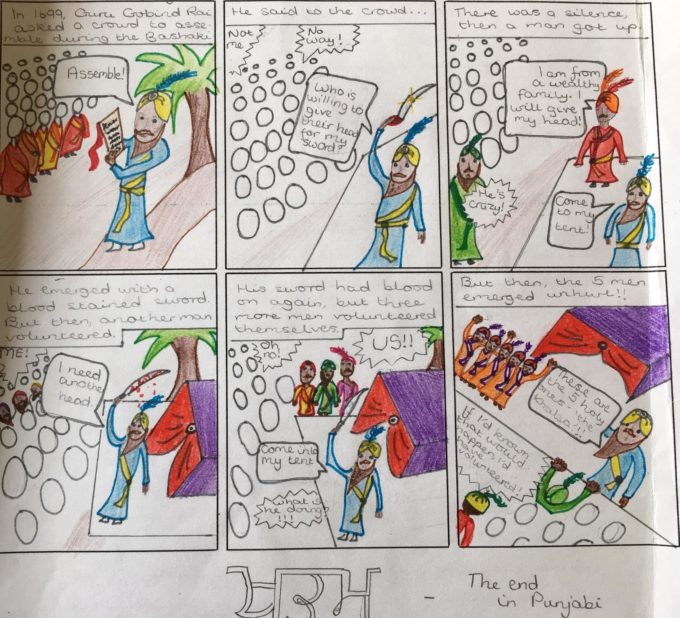 …so I wonder if telling a story in pictures comes naturally to humans.  I’m thinking of the 11th century Bayeux Tapestry (actually embroidery) telling the story of the Norman Conquest of England: 50 narrated action scenes and 68 metres long!

The humour in cartoon stories such as those by Posy Simmonds (English), Claire Bretécher (French) and Gillermo Mordillo (Italian) could never be conveyed purely in words.  The same goes for Astérix.  This page is from Asterix: The Mansions of the Gods (original: Le Domaine des Dieux), written by René Goscinny, illustrated by Albert Uderzo and translated from the French by Anthea Bell and Derek Hockridge.  See my previous post about the film of this book: multilingualmum.com/2016/09/asterix-mansions-of-the-gods.htm 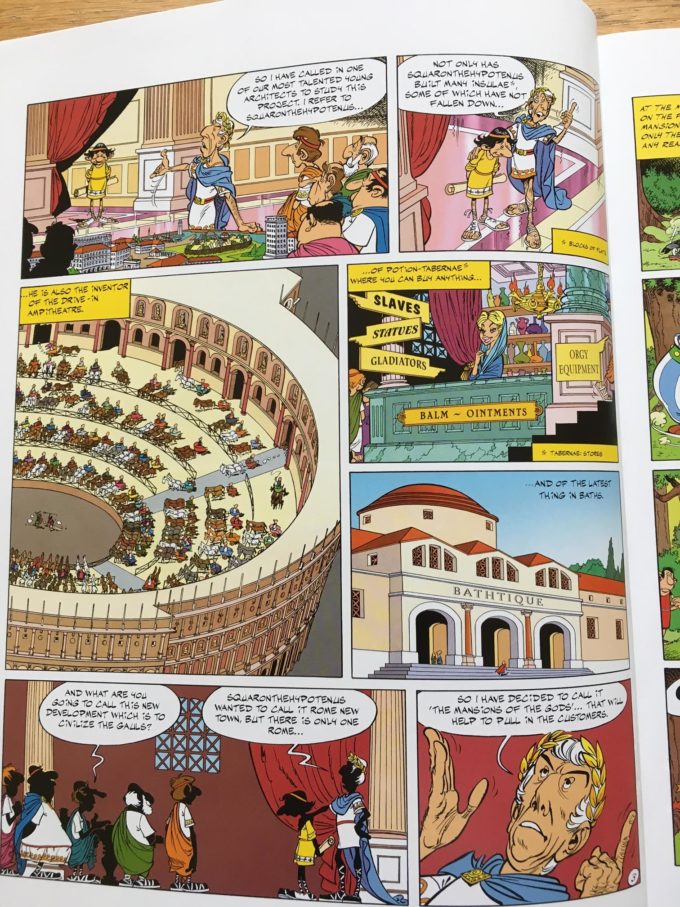 The English classic Tom’s Midnight Garden by Phillipa Pearce is my husband’s favourite childhood book.  We all love the original story but I bought the graphic version for a new experience.  The illustrations are stunning.  This graphic version was first produced in French as Le Jardin de Minuit by the graphic novelist Edith, and then (rather ironically) translated into English by Liz Cross. 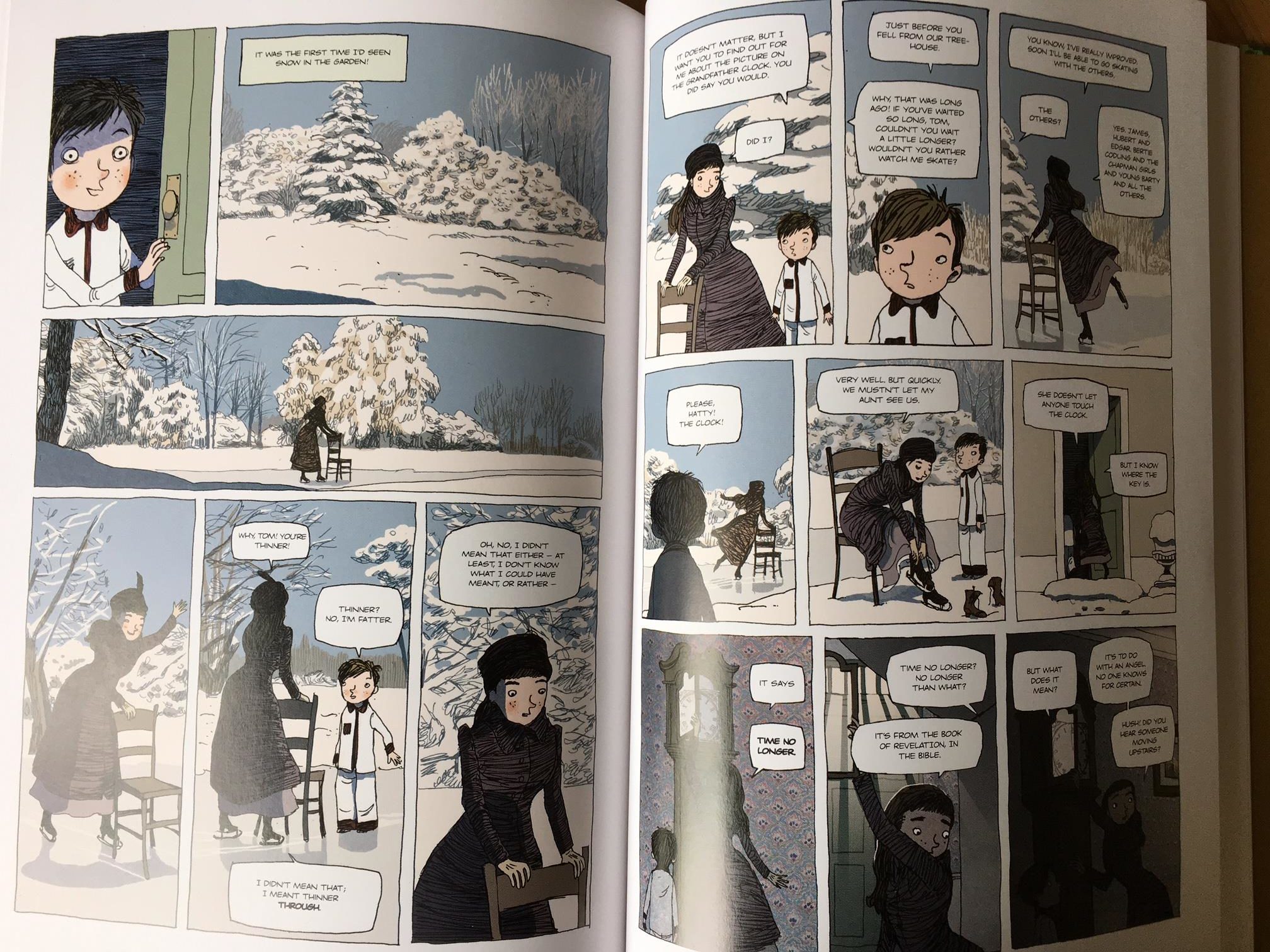 Next I read The Brontes: Children of the Moors, by Mick Manning and Brita Granstrom.  This is another beautiful book.  It tells the story of the Bronte sisters and the stories they wrote, in pictures.  There is more text than you’d find in most graphic novels.  It’s quite a surprise to come across Wuthering Heights and Jane Eyre told in pictures. 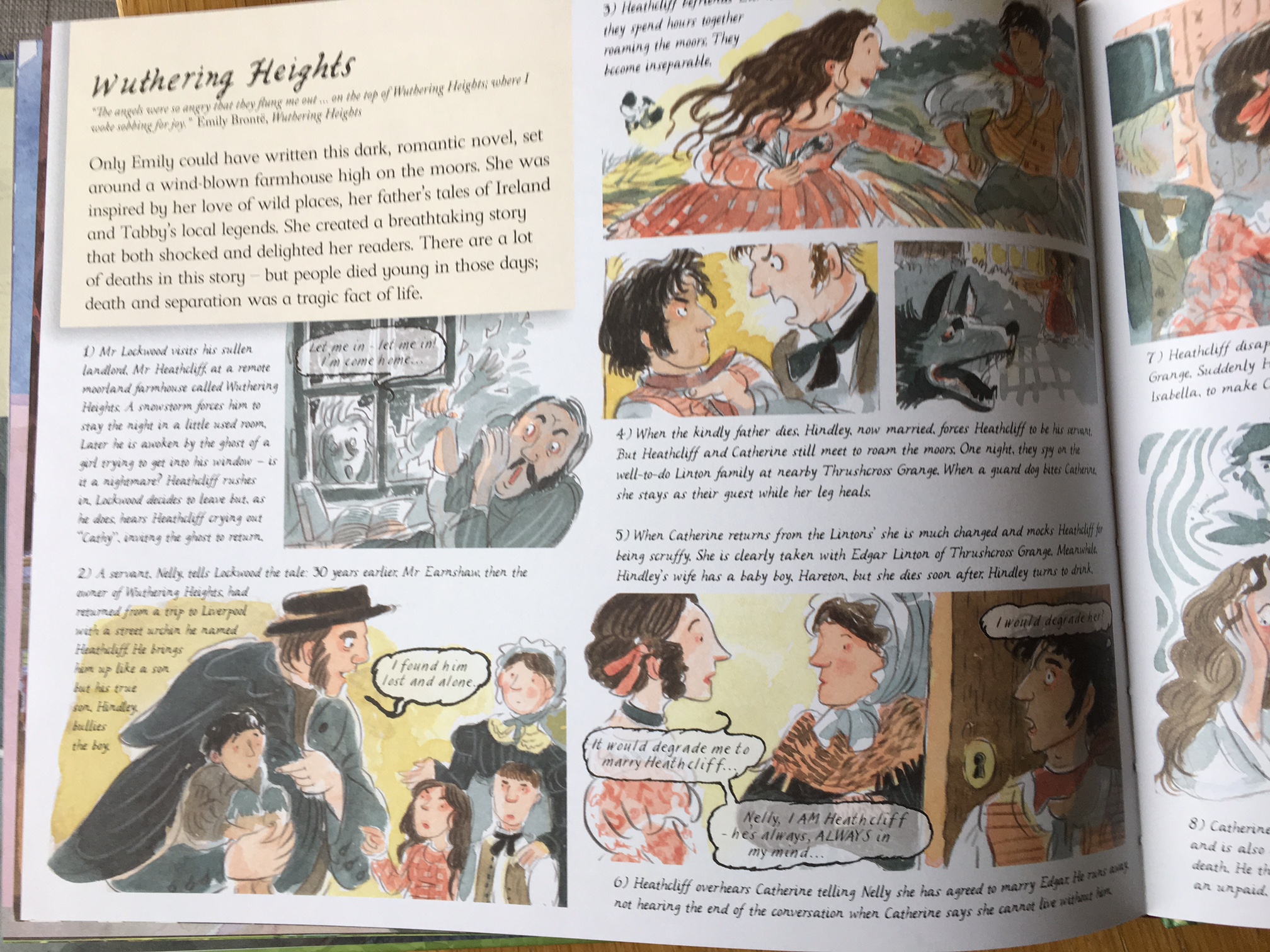 These books don’t replace the original classics – they’re simply a different way of telling the stories, a bit like watching a film.  If one of the classics seems daunting, then reading it in pictures beforehand might help.  Or if you feel that the text version is too much, reading the graphic version will tell you a story which is part of our culture and which you would otherwise not be able to access unless you watched the movie version.

In La Page bookshop I looked for a graphic novel which my daughter and I could both enjoy, apart from the familiar Astérix.  The first book I spotted was familiar – a rediscovery of the story of Anne Frank, by Antoine Ozanam and Nadji, in French.  The pictures are stark and the colours are muted, conveying the sombre atmosphere and the fear.  At the end of the story, when you turn the page from the Frank family’s life in hiding to the emptiness of the annexe when they’ve been arrested, the effect is shocking.

In contrast, the sales assistant recommended Verte, in French by Marie Desplechin and Magali le Huche.  This is a humorous book aimed at kids of about 11 or 12 – although it can be appreciated by adults too.  The pictures are lovely and there are lots of funny bits and interesting colloquialisms.  Verte comes from a family of witches and her mum is determined that she’ll learn how to use her powers.  So Verte has to have lessons in casting spells with her grandma, who is a lot more fun than her mum.  The real fun starts when Verte invites a boy from school, and he’s very scared by the magic. 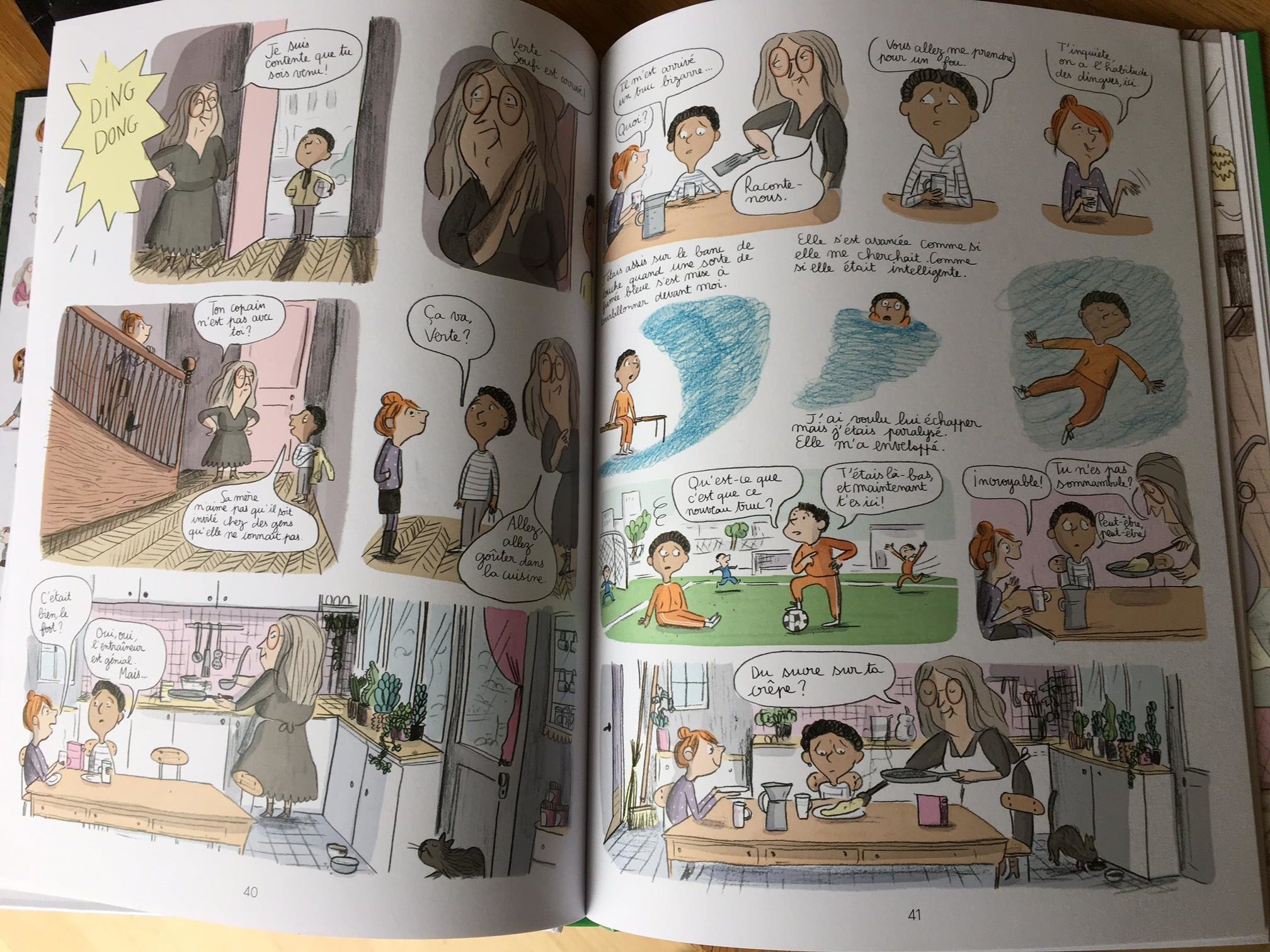 It’s a shame that all Verte wants to do is get married when she’s grown up.  And she and her mum are a bit snobbish about her dad being a football coach.  Apart from that, we both enjoyed the book and I especially admired the facial expressions on the characters.

I’d like to read Le Grand Méchant Renard, by Benjamin Renner, a very funny graphic novel which looks like it’s aimed at younger children but can be enjoyed by the whole family. There’s an English translation, The Big Bad Fox, translated by Joe Johnson.  It’s about a fox who just can’t catch any chickens; they intimidate him.  His mentor, Wolf, suggests he take some eggs and hatch them himself and then he’ll have a ready-made dinner.  But when the chicks hatch they start calling him Mummy……It looks like he’ll have to stick to a diet of turnips.

I’ve mentioned several book translations in this post, and much appreciate the translators who give speakers of other languages access to some brilliant graphic books.

« Give a dog a good name
Family holidays “abroad” in the old days: a car’s story »