If you’re in the Heidelberg area it’s worth looking at the weather forecast and saving a few hours of your best weather for this lovely walk.  It runs along the side of the Heiligenberg (saints’ mountain), parallel to the Altstadt on the other side of the Neckar at an elevation which offers beautiful views. 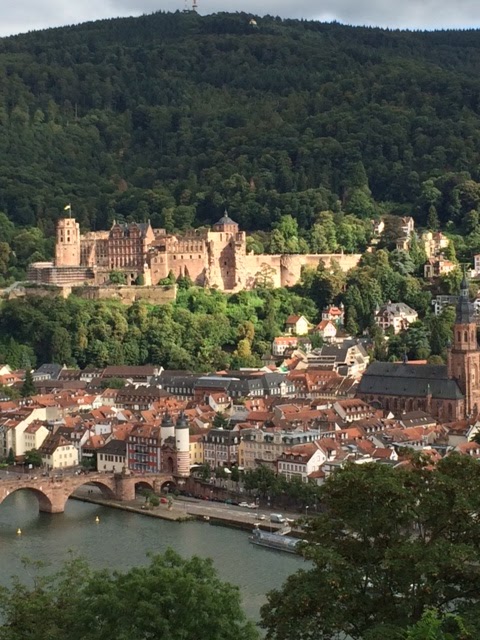 First of all some practical tips. Take your own drinks or picnic as there are no refreshments up there – only a kiosk just before your descent back to the road. Depending on walking speed you need to set aside at least a couple of hours if setting off from the town, to allow for stops to take in the views.  To start the walk we took the tram to the Bismarckplatz and crossed over the Theodor-Heuss-Bruecke.  We then came into the Brueckenstrasse and saw the Philosophenweg  signposted, the second turning on the right.  There is a steep incline at first, then you follow the path for about a kilometre until you are opposite the Alte Bruecke.  The “Schlangenweg” or snake path signposted to your right takes you back down to the river, from where you cross over the bridge and walk straight on to the Marktplatz, maybe for a nice meal or at least for a refreshing drink.

Heidelberg has long been renowned for its romantic ambiance.  The castle and views of the town, river and wooded hills drew the great writers, thinkers and poets of the 19thcentury, such as poets Eichendorff, Brentano, Hoelderin and philosopher Hegel.  The poet Goethe stayed in the town and walked in the castle grounds.  This was the era of Romanticism and the Romantics loved nature, folk art and the medieval period of history.  The Philosophenweg is a relic of this time.

The town is set in a steep valley in the Odenwald forest, one of the warmest regions in Germany.  In the 19th century there would have been vineyards on the slope between the path and the riverside.  We were surprised to see some vineyards there now, and it turns out that vine growing was re-started in the year 2000.

As we strolled along I could imagine the professors and poets talking together earnestly and contemplating the view.  I pictured them wearing academic gowns and square black hats, which professors would have worn daily at that time.  By the way I’ve often wondered about the origin of academic dress, and I found out that the gowns are similar to monks’ habits because the original medieval scholars were of course monks.  So that explains the dressing up at university graduation ceremonies.  The Romantics would certainly have found solitude up there.  It’s still a very peaceful area and we hardly saw anyone else all the time we were up there.  It seems that most of the tourists explore the Altstadt and never make it across the river.

The most picturesque part of the path is about half way along, when you come to the “Philosophengaertchen” (philosophers’ little garden), with its sub-tropical plants and trees such as palm, lemon, almond and fig.  Benches are set out there to let people sit and take in the view just as the poets would have done.  The poet Eichendorff studied in Heidelberg from 1807 to 1808 and there’s a memorial to him there. 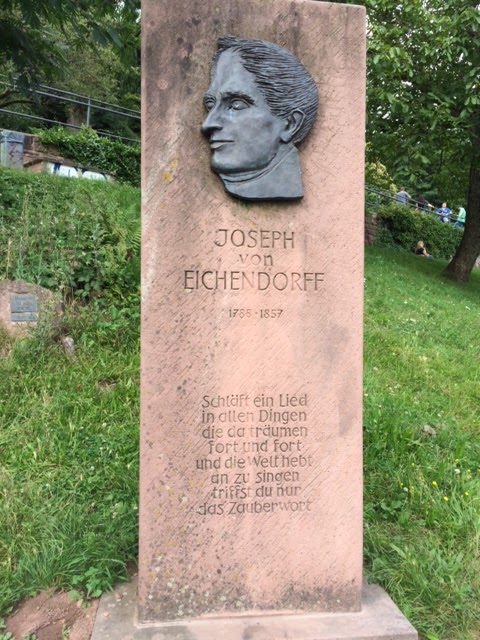 Looking across the river we could see people in the castle courtyard, and found out later that there is free entry to the courtyard after 6 pm.  From the castle, and from the Philosophenweg, the view at dusk must be spectacular.

On our map we could see that if we left the path at this point and walked a bit further up the hillside we would come across a memorial to Bismarck in the form of an observation tower.  We followed the overgrown path leading up the hill from the garden and discovered a massive stone pillar – in German it’s called the “Bismarcksaeule”, or Bismarck pillar. 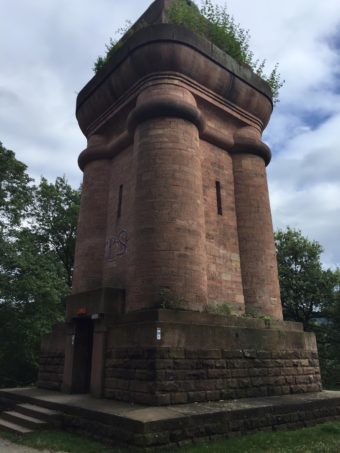 Unlike the Philosophengaertchen, the tower and the area around it are quite neglected.  There are no information boards, no indication that the tower has stood for over a hundred years and we are now in 2016.  In winter when the trees have lost their leaves the tower will be easier to see; we were there in August and there’s no way we would have known about the tower if we hadn’t spotted it on the map.  I’m writing this post at home on a murky 1st November and wondering how spooky the tower looks right now.

This was the first memorial to Bismarck I’d seen in the shape of a tower. The memorials I’d seen to him had always been statues or busts in town squares named “Bismarckplatz”, as in Heidelberg.  So why does he appear everywhere?  Until unification in 1871 Germany was a collection of duchies and small kingdoms.  At unification Kaiser Willhelm 1, King of Prussia, became head of state and Otto von Bismarck became the first German chancellor.  After Bismarck’s death in 1898, 240 observation towers were built at high points across the German Empire, all in the shape of a massive pillar of fire.  Some of the towers are standing in what is now France, Poland, Russia and even Africa.  The Heidelberg tower was built in 1900, funded by a local rich person.  It has columns at each corner, an eagle on one side and Bismarck’s coat of arms.  We climbed the stone steps inside with no lighting, which was an eerie experience and a contrast to the sunny walk.  Our daughter was convinced that this would be too scary for me and provided me with reassurance all the way up to the top.  It’s ironic that the tower was built after the Romantic era; the Romantics would have loved it.   At the top we had a good view for miles.  Above our heads we noticed a metal holder for a fire cauldron.  We read later that 167 of the towers had firing bowl facilities.  The plan was to light them all on Bismarck’s birthday to form a network of beacons across the empire.  But Bismarck’s birthday was on 1stApril, around Easter time, so people had other festivities to think about and the idea didn’t take off.

If you want a longer walk you can take the Oberer Philosophenweg leading from the tower and venture further up the Heiligenberg to see interesting ruins of an 11thcentury monastery called the Michaelskloster, a Nazi-era open air amphitheatre and the remains of a 4th century BC Celtic hill fort.  We didn’t have time for this and instead continued along the Philosophenweg and kept stopping to take in the views. 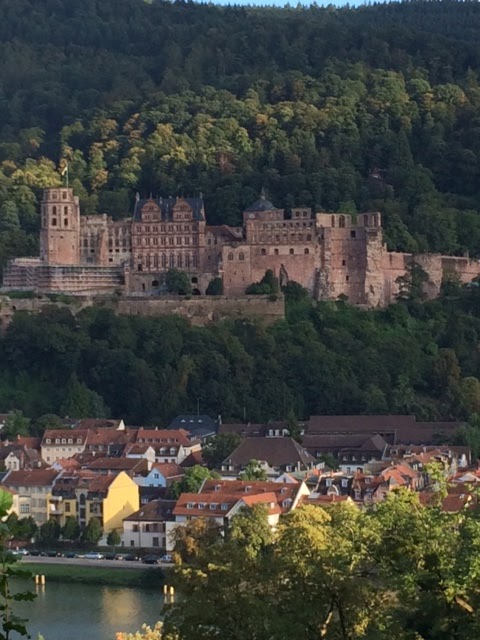 Further along the path we came across a modern seesaw, marked on the map as Sp.Pl. – Spielplatz or playground, and we stopped off here for a while to try it out.  This, along with ice cream and a drink at the kiosk before going back down to the river, brought us right back to 2016.

« Heidelberg – short break in a historic university town
For pre-schoolers with more than one language: fun videos about friendship »