Toddlers and pre-schoolers love to watch the same videos and have the same stories read to them again and again, and they pick up lots of language this way.  Children growing up with more than one language benefit even more.  Simple short videos of 5 or 10 minutes are best.  After we’d finished watching the programmes or reading the books my (then 2 or 3 year-old) daughter and I  used to carry on speaking the relevant language, so the videos and books acted as a kind of “trigger” to speak that language.  Here are a couple of favourites which you can still access now, 8 years or so later.

Maisy is a British cartoon mouse who became so popular among 2 and 3 year-olds that her adventures were translated into 27 different languages.  She’s Mausi in German, Mimi in French, Molly in Swedish and Muis in Dutch.  Her creator, the artist Lucy Cousins, takes her inspiration from children’s art and says she’d rather go round a primary school than an art gallery.  I can identify with that as I love children’s art and writing.  Maisy’s TV series of 5-minute episodes was adapted from Lucy’s books and shown in the UK between 1991 and 2001 but lots of these episodes are available to watch on YouTube and DVD. 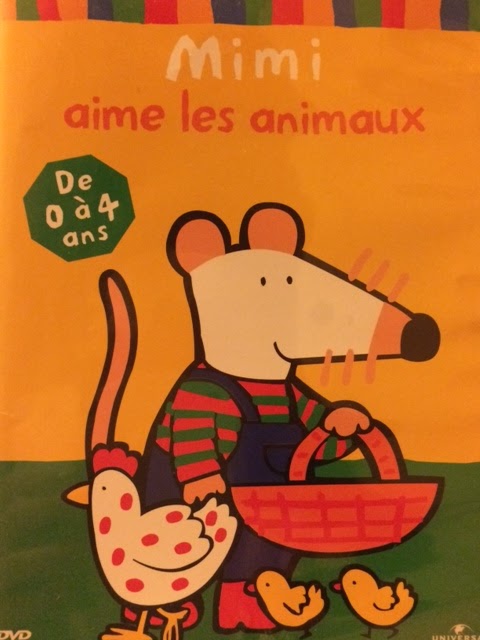 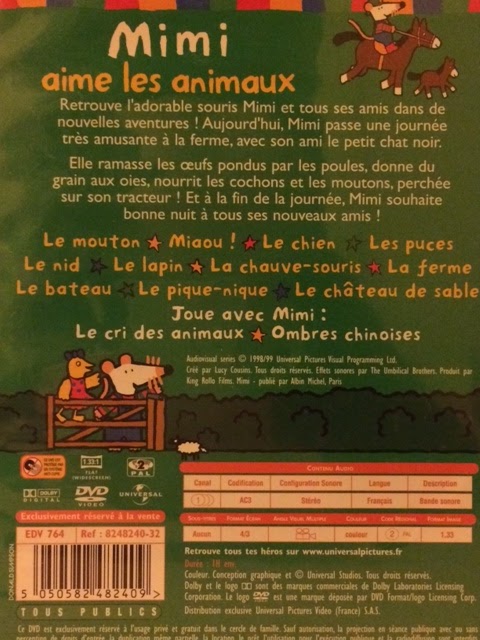 The pictures in the books and videos are simple and vibrant; apparently Maisy herself was developed from a “doodle”.  I was confused to recognize the voice narrating the English version: it’s the actor Neil Morrissey, best known for his role in the laddish sitcom Men Behaving Badly about 20 years ago.  That seems rather incongruous, for these are gentle stories based around things that happen to pre-schoolers such as starting nursery, opening Christmas presents and making biscuits.  Maisy is a happy, easy-going mouse and everything she does is presented as a bright new beginning.  Her friends include a crocodile and an elephant, so obviously it’s ok to be different. They support each other and work together to solve such problems as a ball stuck on a roof and a battery running out on a toy.  They are “good role models”.

For adults, and even for older kids, the Maisy picture books are great to share with little ones, whereas the videos can be a bit irritating.  To us the narration sounds overly sweet and repetitive, and the action is slow, but that’s ideal for the pre-schooler.  It’s actually the soothing voice, the repetition and the simple predictable vocabulary which make the videos and books ideal for pre-schoolers learning more than one language.  My daughter loved them.  For Maisy fans there is a website, www.maisyfunclub.com, with plenty of related games and activities to keep them busy.

The Australian adventures of Frank and Buster were shown in 10 -minute episodes between 2003 and 2007, on the CBeebies channel in the UK.  The stories are a bit more sophisticated than the Maisy ones!  You can still see them on YouTube and DVD, including versions dubbed into other languages, eg. Die Koalabrüder. 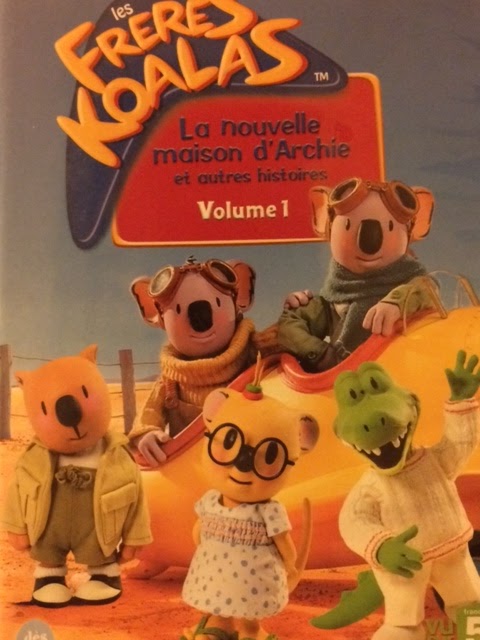 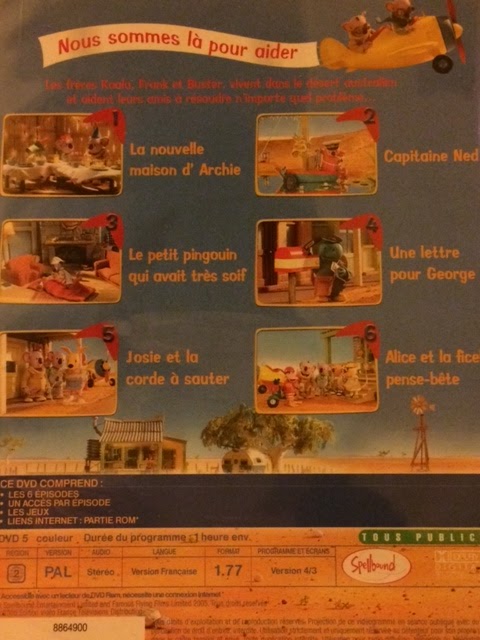 There are some spin-off books and activities from the series – I remember reading some of the stories in German with my daughter and making the brothers’ house out of a cardboard box.

The emphasis is on helping and being a good friend.  “We’re here to help,” the Koala Brothers tell us. Because they live in the Outback they have to fly off in their own ‘plane to go and sort out other animals’ problems.  The animals all have their distinctive personalities; of course the postman is a tortoise, very slow and very proud.  Ned the wombat is timid and Frank and Buster help him when he’s scared by noises in the night.  We watched the DVDs in French.  In my favourite episode, “Archie et sa dent de lait”, Archie the crocodile (posh British accent, well-appointed cottage near the local water hole) is bothered by a wobbly tooth.  In French he says “J’ai la tête qui tremble…” as he stands there holding his tooth and moving his head.  He’s not very bright.  The other animals try to help by distracting him and at one point we see him playing his favourite game, tennis.  I’ve always found tennis to be a good distraction from problems as I have to concentrate on the ball, but apparently it’s not enough to make Archie forget the wobbly tooth.

There aren’t any villains in these stories, but they help children to learn about emotions and empathy.  The animals have to cope with differences of opinion, thoughtlessness, jealousy, fear and failure to change when you need to.  Adults might enjoy the clever animation and the humour (I did).  The language and content are more demanding than Maisy but again very good for bilingual and trilingual kids as the vocabulary can be predicted from the pictures.

« Heidelberg – Philosophers’ Way and Bismarck Tower: a walk in nature and a spooky relic
German textbooks: how they’ve changed! »